I think I love children’s books more than most children. I could spend hours in bookstores and libraries, getting lost in the whimsical story lines and illustrations. Now that I am a mother of two young girls, I find particular joy in introducing them to my all-time favorite characters—Ferdinand, Ms. Frizzle, Amelia Bedelia—and in discovering new stories that are quickly becoming their classics.

When my four-year-old (think: a little Ramona Quimby) had a rocky transition to preschool, one of the first tools I used to help her navigate the situation was a book—The Kissing Hand, by Audrey Penn. For weeks at drop off, like Chester Raccoon and his mother, we kissed each other’s palms, and her anxiety melted away. As a parent, I was reminded of the incredible value of books, as prescriptions for everyday problems.

From a meditation on the importance of being quiet and still to a rhyming exploration of the diversity of life on Earth, my favorite books this year are ones with messages that help kids understand and interact in the world around them. 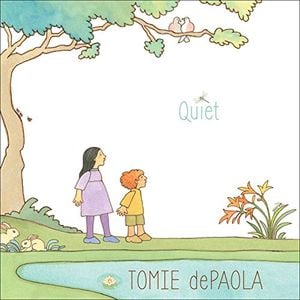 If you’re familiar with Tomie dePaola, it’s most likely because you’ve read his 1975 classic Strega Nona, about a young man who doesn’t follow directions with disastrous results. With the author-illustrator’s latest book, Quiet, there’s a lot less secondhand anxiety.

The plot is simple. A grandfather is on a walk with his grandson and granddaughter. They observe busy bees, birds aflutter and their own dog chasing after a ball, before Grandpa invites them to sit on a bench. When they stop to rest, they notice the other things around them slow down as well. “I can think, when I’m quiet,” says the girl. “I can see, when I’m still,” says the boy.

Apparently, dePaola was moved to write the measured and meditative story when he observed a family sitting at a restaurant, all on their phones. With Quiet, notes Publishers Weekly, the author “reminds the reader that the great rush of life is not all it’s cracked up to be—and that pausing can open people, and moments, to wonder.” Wonder. At Smithsonian, we’re all for that. 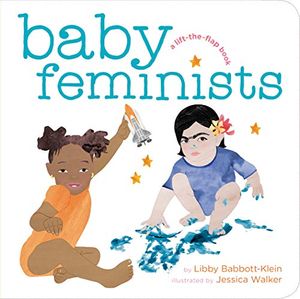 Brooklyn-based writer Libby Babbott-Klein delivers a sharp little board book that’ll remind your little one that everyone was a baby once—even octogenarian RGB. “Before she rose to the Supreme Court, Justice Ruth Bader Ginsburg was…,” the book begins. Then, lift the flap adorned with illustrator Jessica Walker’s watercolor portrait of the justice to reveal “a baby!” That’s right. Ginsburg’s iconic lace collar, at first visible through a die-cut hole in the flap, becomes baby Ginsburg’s bib. The game of peek-a-boo continues, introducing infants and toddlers to artist Frida Kahlo, astronaut Mae Jemison, tennis star Billie Jean King, artist Yoko Ono and other activists. For the adults, it’s entertaining to see what characteristics (in Kahlo’s case, her famous unibrow) and accessories (King’s sweat bands) carry over to the baby pictures. 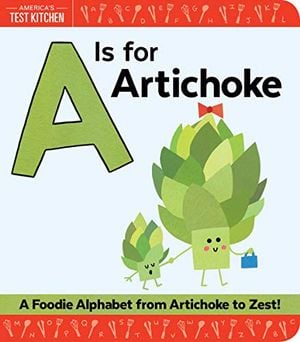 A Is for Artichoke: An ABC Book of Food, Kitchens, and Cooking for Kids, from Artichoke to Zest (America's Test Kitchen Kids, Easter basket stuffer)

There is always room on the shelf for another alphabet book, especially one that really stretches a kid’s vocabulary. For budding foodies (like my preschooler, obsessed with shows like Kids Baking Championship), or picky eaters that have their parents wishing they’d take interest in the kitchen, America’s Test Kitchen released A is for Artichoke, a culinary-themed primer. The book has the occasional predictable example, like “I is for ice cream,” but each of those comes with a more surprising food science fact, e.g.: “The sugar in the ice cream prevents the liquid in the cream from freezing solid.” Even adults can learn a thing or two. Here, “X” isn’t for “X-ray.” It’s for xigua, another word for watermelon. 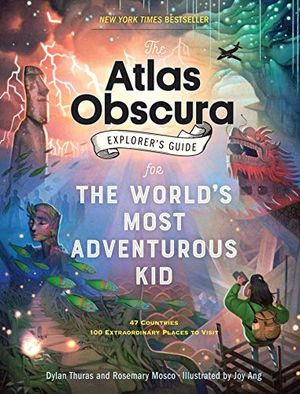 As a parent, I’ve found fact-filled anthologies to get the best mileage. They allow us to pick the biography of a heroic woman or two (Goodnight Stories for Rebel Girls) at bedtime or a vibrant map (The 50 States) to study until we get to the next pit stop on a car trip. The Atlas Obcura Explorer’s Guide is a treasure we’ll come back to again and again.

The playful guide starts with an aspirational packing list, noting everything from sun protection to goat treats (“just in case you run into some adorable, hungry goats”), and then launches into an adventure plan of 100 places in nearly 50 countries. Authors Dylan Thuras and Rosemary Mosco describe natural phenomena, like Antarctica’s Blood Falls, and man-made destinations, including Peru’s Nazca Lines. And the way the book is structured, with far-flung yet similar places, such as sunken cities, creepy catacombs, lava lakes and abandoned amusement parks, featured back-to-back, serves to emphasize one of its key messages: “Distant countries have more in common than you could ever imagine.”

The tome will leave kids (and adults) with a real wanderlust. Take me to Zambia’s Devil’s Swimming Pool! 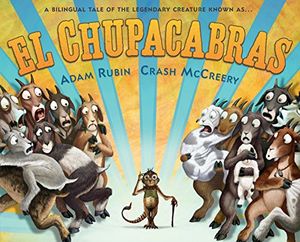 Adam Rubin, of Dragons Love Tacos fame (if you haven’t read it, get your claws on a copy…now!), is back at it with El Chupacabras, a refreshingly quirky tale of the mythic “goat sucker.” Like Bigfoot and Nessie, the chupacabra is a well-known beast in cryptozoology, with its first sightings reported in the mid-1990s in Puerto Rico. Described by witnesses as a clawed creature with glowing red eyes and spikes down its back, it’s been blamed for sucking the blood of goats, sheep, chickens and other animals.

Illustrated by Crash McCreery, a creature designer for Jurassic Park and other films, Rubin’s tale has a unique linguistic twist. It’s bilingual, but with each sentence written half in English and half in Spanish, then a second time with the languages reversed. “This all happened a long time ago, en una granja de cabras,” the scene opens. “Todo esto ocurrió hace mucho tiempo, on a goat farm.” The approach feels like an effective one for second-language learning. All proceeds from sales of the book go to the Hispanic Federation. 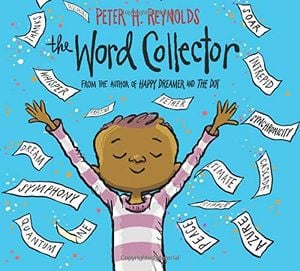 My daughter keeps a list of “funny” words—and by funny, she means funny sounding. Opportunity. Ampersand. Mississippi. Oregano. Handkerchief. They all make her giggle. Peter H. Reynolds’ The Word Collector captures the joys of language learning and quickly became a favorite in my household. The story of Jerome, a precious logophile who collects words, organizes them, and then accidentally drops them only to find poetry and songs in the heap, reminds us of how words—“short and sweet words” and “words whose sounds were perfectly suited to their meaning”—can be such wonderful discoveries. 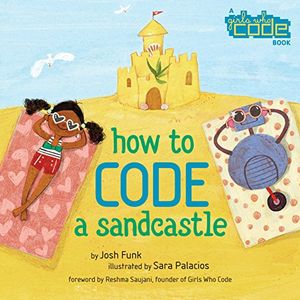 How to Code a Sandcastle

The non-profit Girls Who Code delivers an entertaining little story about a girl named Pearl, who programs her robot, Pascal (like the programming language), to build the perfect sandcastle. She breaks the big task into smaller sets of instructions, like “Fill the pail with sand” and “Dump the sand on our spot.” In composing these instructions, she introduces readers to different coding terms, such as a sequence and a loop. Pearl even uses an if-then-else to teach Pascal to collect the proper items for decorating a castle: “IF the item you see is small and doesn’t move and doesn’t belong to anyone, THEN bring the item back to the castle, ELSE find something different.” Writer Josh Funk composes a narrative that seems to naturally incorporate these concepts, without it feeling too forced. 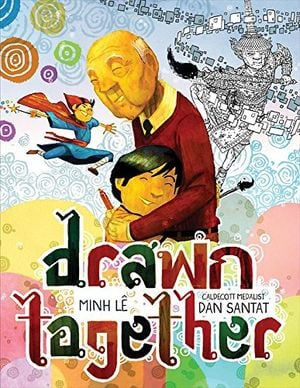 The book opens with comic-book-style panels depicting a boy and his grandfather, first eating a meal together, then watching television, but largely speechless. A few words are exchanged, the boy in English and the grandfather in Thai. But the two don’t connect—until they start to draw. The boy sketches a colorful, young wizard—his superhero self—and the grandfather pens an intricately detailed Thai warrior. The two avatars battle a dragon and cross a bridge over a gaping divide, symbolic of the wide cultural gap they’re closing. Like the characters, author Minh Lê and illustrator Dan Santat were drawn together, bringing their own relationships with their Vietnamese and Thai grandparents to the project. Even if readers don’t share this experience of overcoming a language barrier, the powerful story is relatable, when it comes to navigating generational gaps and the many things that can create distance between family members. 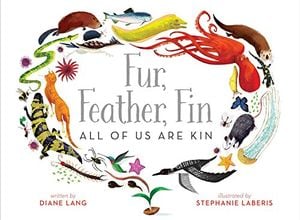 Fur, Feather, Fin―All of Us Are Kin

After reading this book, you won’t be surprised to hear that author Diane Lang also uses her gift for science communication at nature centers in California where she lives. In her story, Lang describes the characteristics of different animal classes and phyla using simple rhymes that could certainly serve as helpful mnemonic devices. I can hear a classroom of kids reciting her lines, “Changing body; smooth, moist skin—that is an amphibian.” The overarching message is one that should be driven home every day: despite our differences, we all have “minds that work and hearts that beat.” 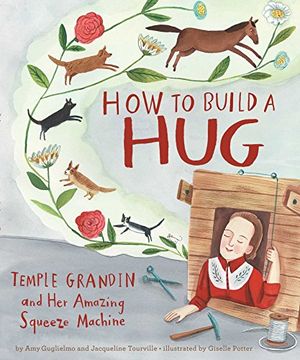 How to Build a Hug: Temple Grandin and Her Amazing Squeeze Machine

Every year, publishing houses release a number of picture book biographies. In 2018, illustrated retellings of the stories of Mary Shelley, Thomas Cole, Belva Lockwood and Harvey Milk, to name a few, hit shelves. But my personal favorite, How to Build a Hug, chronicles animal scientist and autism spokesperson Temple Grandin’s efforts to invent a hug machine. It follows a young Grandin as she observes other kids finding comfort in hugs. “But to her,” authors Amy Guglielmo and Jacqueline Tourville write, in terms that sound straight from the mouths of babes, “hugs felt like being stuffed inside the scratchiest sock in the world.” What I think makes this biography stand out is the way it deftly disseminates facts without losing the tight, playful narrative of a children’s book.