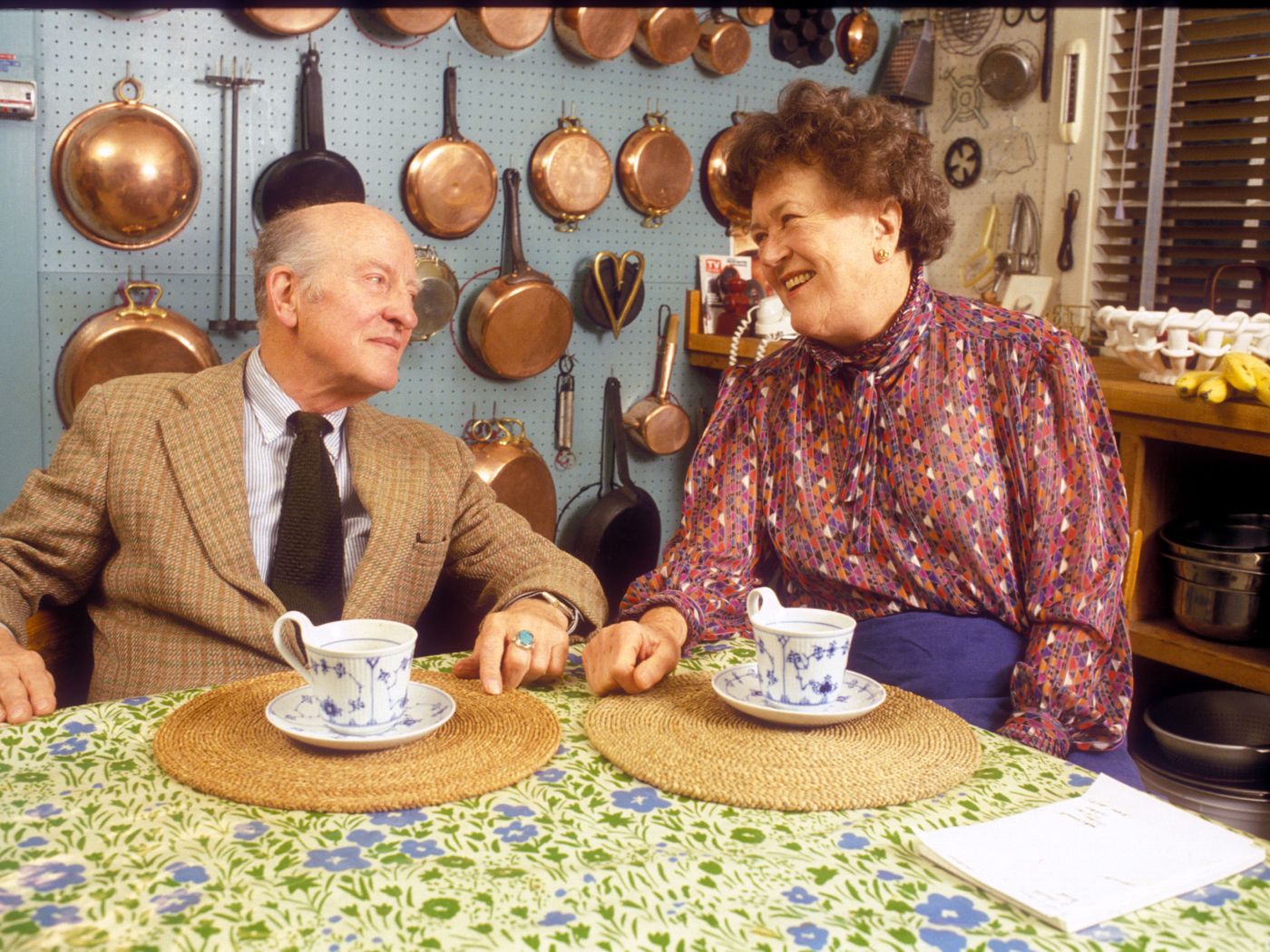 Julia Child and her husband Paul Child at their home in Cambridge, Massachusetts. Rick Friedman/Corbis via Getty Images

When Julia Child was asked about the design of her home kitchen in 2001, she explained: “It’s certainly the soul of our house, and that’s one reason Paul [her husband] designed it the way he did with nice colors. It’s an attractive room, I think. It’s a work room that’s good looking.”

Many people heartily agree. Over the years, visitors to the Smithsonian’s National Museum of American History in Washington, D.C., where Julia Child’s kitchen now resides as a popular exhibit have inquired about the exact names of the blue and green hues of the cabinetry. Not surprisingly, passionate admirers of America’s most popular and preeminent celebrity chef want to paint their kitchens in honor of their culinary hero.

The specific names of the blue and green paint and the manufacturer that the Childs used were sadly lost to history. But after the museum’s intrepid designers examined the cabinets and compared them to paint chips from various manufacturers, they determined that the blue-toned cabinets are close to Benjamin Moore’s “Covington Blue” and the green-toned pieces align with Benjamin Moore’s “Sherwood Green,” or possibly “Stem Green.” Assuming that the cabinets were likely affected by kitchen steam, cooking oils, cleaning solvents; and, perhaps even fading due to the room’s abundant seasonal sunlight, we still couldn’t know with 100 percent certainty.

Julia Child's kitchen (above, click to discover more) was “certainly the soul of our house," she said. "And that’s one reason Paul designed it the way he did with nice colors." (Jaclyn Nash, NMAH)

Then, in 2013, as luck would have it, a craftsman who had refinished the kitchen’s butcher-block countertops at the Childs’ home in Cambridge, Massachusetts, visited the American History Museum with his wife. He reported that in the late 1980s, he and a local painter worked together in the kitchen, sprucing it up for a special occasion. I seized upon the opportunity to find out if the painter had remembered the precise paint colors used on the cabinetry. He said he’d try to find out. He also admitted with a twinkle in his eye to having tucked his lunch-time McDonald’s burger wrappers in behind Julia’s stove and wondered if we’d come across them. We hadn’t.

Several weeks later I received an e-mail with a most appreciated nugget of information: the painter had used Benjamin Moore Satin Impervo oil base paint and made up the color on the spot using cobalt blue with some yellow tint and a few drops of raw sienna. He added that, were he to do it again, he would have used an eggshell finish.

Visitors often ask about the machine beneath the telephone on the counter. In large bold letters, it is marked “Do Not Move This Machine.” A small dishwasher, perhaps? The unit is an icemaker, an especially important machine used in the 1990s when the kitchen became a set for the chef’s three television series: “In Julia’s Kitchen with Master Chefs” (1993-1995), “Baking with Julia” (1996-2001), and “Julia and Jacques Cooking at Home” (1998-2000). Television crews recorded multiple episodes over the course of a few intense weeks. Throughout the shoot there was a lot of food to keep fresh, thus the need for a reliable source of ice.

Among the artifacts that Julia donated to the Smithsonian is a photo album containing snapshots. These were taken in February and March 1998 when she and Jacques Pépin taped 26 of the many shows they did together. The photographs reveal the chaos of her home when the show was being produced—piles of dishware, coolers of food and stacks of cookware, linens and cutlery. The prep work was done in the cellar, while the formal dining room became the control room. Some 25 crew members filled the house performing their roles in making sure the set was dressed, the ingredients were at hand, the talent had hair and makeup in place, and the equipment was ready to roll. The snapshots of food—from fish to vegetables to various cuts of meat—provide ample evidence of the need for lots of ice.

When the curatorial team, Rayna Green, Nanci Edwards, and I first visited the 89-year-old Julia in August 2001, we didn’t know what to expect. Many visitors have asked, did she cook for us? We knew she was still very much involved in her own work, and we wanted to keep our disruption of her routine to a minimum. Besides, she already had other commitments for lunch and dinner during our visit, so the three of us headed out for lunch in the neighborhood and, at day’s end, happily had dinner in Cambridge.

Things were a bit different when we returned that September to interview Julia along with her video crew from New York. We arrived at her home on September 11, 2001, just as the terrorist attacks were taking place in New York, Washington, D.C. and later on an aircraft flying over Pennsylvania. As Julia entered the kitchen where the interview was to take place, she encountered all of us, shocked and shaken, and wondering how to contact our families in Manhattan and D.C. Ever the professional, Julia suggested we continue the work we came to do, and recommended we take breaks whenever needed.

The kitchen soon started feeling a bit cozier, a bit homier, a bit safer and more secure as the aroma of something cooking enveloped the room. A pot of veal stew had been put on a low burner and by lunchtime, it was ready to eat, along with a green salad, and a crusty bread with butter.

As we sat around the formal dining room table (alas, the kitchen was filled with our equipment), Julia explained that the delicious lunch was actually leftovers from a special meal made in her honor the previous evening. The meal, prepared by members of a professional culinary and education organization, Les Dames d’Escoffier, including several female chefs from Boston and Providence, restored us and helped us to complete our work on that difficult, dreadful day. And it was Julia’s calm demeanor, her steady and engaging conversation, and her enormous good will that nourished us in ways we would never forget.

The exhibition,“Food: Transforming the American Table,” home of Julia Child’s Cambridge kitchen, at the Smithsonian’s National Museum of American History in Washington, D.C., will be closed for renovations September 3 through October 24, 2019. New displays coming this fall include stories on migration and food, America’s brewing history, a history of diets and dieting, and the emergence of Mexican-American vintners.

Paula Johnson is project director and co-curator of the exhibition, "FOOD: Transforming the American Table" at the National Museum of American History, where she has helped shape the museum’s research, collecting, exhibitions and programming around food history. Johnson, a folklorist and public historian, has conducted field research on many topics and published two books on the Chesapeake Bay.