A couple years ago, a pair of inventors from Tahoe City, California, claimed to have come up with a fix for one of the most persistently annoying problems. You see, coffee is ideally brewed at a temperature of about 195 to 205 degrees Fahrenheit, meaning drinkers typically have to wait about 10 minutes before it cools to a more sippable 140 degrees. After which point, there's a small window of perhaps 15 minutes before the staleness of room temperature sets in.

Coffee Joulies, a Kickstarter project that raised $306,944 from enthusiastic supporters, was supposed to smooth the transition to the office. Drop one of the coffee bean-shaped capsules into a full cup and it would almost instantly absorb the excessive heat and cool down the coffee. Gradually, the non-toxic substance releases this trapped heat, which should keep your coffee warm for twice as long.

Dean Verhoeven of Wake Forest, North Carolina, had spent several years figuring out a safe and reliable solution to the whole too-hot, not-warm-enough dilemma when he found out that other upstarts may have beat him to it. Though discouraged, Verhoeven, delving a little deeper into the Coffee Joulies technology, discovered what he thought were some significant flaws in the product.

He was right. Reviews of the Coffee Joulies were less than, well, lukewarm, with the most common criticism aimed at the capsules' ineffectiveness at keeping beverages warm as long as indicated. Cook's Illustrated found the Joulies system in practice to be "unremarkable," though it did quickly bring the temperature down to a drinkable 140 degrees. The defect, Verhoeven surmised, was that an encased gob of heat-absorbing paraffin wax simply wasn't enough, since people were still drinking out of ceramic cups, which he described as "terrible" at sealing in heat.

On the other hand, vacuum-insulated "Thermos" cups, sold as travel tumblers, are remarkably efficient at preserving heat as well as cold, sometimes for an entire day. The technology, however, might work a little too well as it also tends to prolong a fresh brew's scalding heat.

Verhoeven's new Temperfect mug harnesses the heat-soaking properties of what’s called phase-change materials. These state-shifting substances can be found in building insulation and other industrial environments. They’re even used in clothing apparel and baby blankets. In 2009, two German researchers actually designed what may be the first coffee mug to incorporate such materials. Their mistake? The mug was still ceramic.

“Ceramic just doesn't work well as a heat insulator,” says North Carolina State student Logan Maxwell, who collaborated with Verhoeven on the project. “This wastes the potential benefits of PCMs [phase-change materials]. So we had to completely rethink how to make a mug that systemically works to both cool down hot drinks to comfortable temperatures and lock in enough heat so that they stay warm." 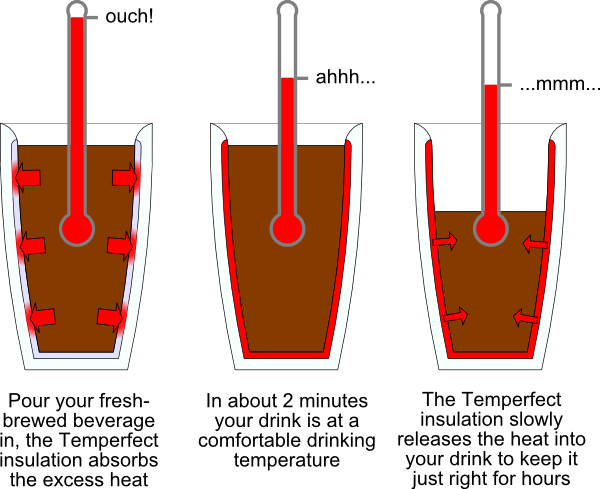 Verhoeven's approach was to create a mug that combines both PCMs and vacuum insulation, enabling each to work more efficiently. The mug's outer wall is composed of stainless steel. This steel works as a conductor to help draw in heat absorbed by a layer of phase-change material that's located directly within it. At room temperature, the material exists in a solid state, turning to a liquid form as it collects heat. The PCM layer is sandwiched on the other side by a layer of vacuum insulation that prevents this stored heat from escaping. Verhoeven says the hardest part of assembling a prototype was having to daisy-chain the manufacturing process, building part of the mug at a conventional factory and then using a separate facility to perfect the PCM component, which he refers to as the "exotic part."

“We kind of had to go the roundabout way to build these prototypes because none of the mug manufacturers I approached thought it was worth the investment,” Verhoeven says. “But the enthusiastic reaction I got from those who've heard of it could mean we're about to change some minds.”

So will the Temperfect Mug indeed be the morning-changer caffeine addicts everywhere have been pining for? We'll find out soon enough. The duo's successful KickStarter campaign recently ended after raising nearly $270,000, with shipments expected to go out early this year.