You probably don’t know this, but it takes about six months for a coffee bean to go from crop to cup. During that time, it undergoes a lengthy bureaucratic process of being shipped around from facility to facility, clearing a gauntlet of regulatory hurdles along the way, before it arrives finally to a local cafe. In fact, a coffee bean can change hands as much as 150 times before it's served up.

Sadly, many coffee drinkers will never know how sweet, not bitter, a freshly brewed cup of joe actually tastes. That's because the aromatic qualities of freshly roasted coffee degrades almost immediately, as the flavorful sulfur compounds begin to oxidize the moment it's exposed to open air. Though roasting is carried out just prior to the beans being sealed and packaged, fluctuations in the surrounding temperatures as the coffee is moved from one place of storage to another also causes staleness to set in. Coffee connoisseurs have criticized large coffee shop chains like Starbucks for trying to compensate for this uncomfortable fact by using dark, overly-roasted beans that leave behind more of a burnt or charred taste than any actual resemblance of the bean's natural flavor.

The so-called Third Wave Coffee movement, a search for the freshest brew possible, is in some ways a revolt against the highly-profitable industrial complex that has coalesced around coffee production. A Wall Street Journal report that explores home brewing methods delves into the extravagant lengths some aficionados go to, from repurposing vintage hot air popcorn poppers to $4,000 propane-powered systems, to yield a perfect, even roast. 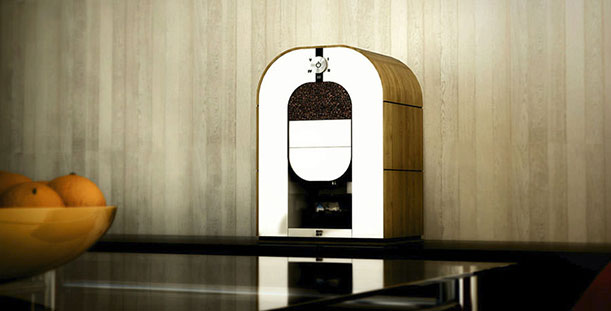 Hans Stier, a German inventor, feels something isn't right about having to turn your kitchen or backyard into some kind of elaborate makeshift laboratory just to enjoy the fresh taste of coffee. What the world really needs, he believes, is a device that makes the entire process of roasting, grinding and brewing as simple as pressing a button on your home coffee machine.

It took two years, $100,000 of his money and testing 135 prototypes for the former tax attorney to develop the Bonaverde, an all-in-one coffee appliance. No one, however, wanted it—at least that’s what he was told by every potential investor and manufacturer who he had hoped would help bring the product into the consumer marketplace.

“I found out while pitching the technology that this wasn’t just a new device, it’s a major disruption,” Stier says. “I was going against large industrial roasters and a bunch of other middlemen whose business is dependent on keeping the status quo intact.”

Electronic companies, for the most part, reasoned that such a device would be too expensive to actually make money. Some even expressed doubt as to whether offering superior taste would even make a difference. But, Bonaverde's Kickstarter campaign, which ended on Sunday, raised a grand sum of $681,461, easily surpassing its fundraising goal of $135,000 within the first week.

The machine, which resembles a mini jukebox, features a timer than can be programmed with specific presets based on the roasting profile of certain kinds of beans. As demonstrated in this video, green coffee beans can be scooped and dumped into the stainless steel rotating roast compartment through a sieve at the top. After the beans are roasted and cooled, they move into a separate area where they are ground and collected into a coffee filter. The rest of the process is similar to standard coffee machine brewing, and, in just 15 minutes, you have a truly fresh brewed cup of coffee.

The most challenging part of combining the various components, Stier notes, was developing an efficient roasting mechanism, since temperatures, roast time and rotation speed varies depending on the type of beans used and the particular flavor a person wants to create. (The product will likely come with suggested roasting profiles for different beans, though users will surely do some experimenting of their own.) The Bonaverde runs on non-combustion technology, with fine roasting achieved through a process similar to what you'd find in a toaster.

"Everything else is applying too much heat," Stier explains. "And who wants a gas system in their kitchen anyway? Ours a bit more technology enhanced."

For $300, Stier claims its a difference everyone can taste. His company's internal blind taste tests found that 100 percent of subjects could differentiate between Bonaverde's "fresher" coffee and other varieties of drip coffee. People tend to describe the coffee produced by the Bonaverde machine as tasting much milder and sweeter. "People who aren't coffee experts can even detect the more flowery highlights of beans that come from Costa Rica without even having a reference point," he adds. "It has its own taste, just like wine."

As for where to find raw coffee beans, Stier is working with growers to foster an online marketplace of sorts where consumers can order shipments directly from farmers, a potential business model that's beneficial to both parties. Coffee farmers earn only 10 to 12 cents for every dollar the consumer spends on coffee. Home roasters would also save money as high-quality raw coffee beans cost at least half as much, sometimes less, than the $12 a pound or more for roasted beans from Starbucks and other suppliers. While Stier admits he doesn’t have any specifics on how such a platform would work, he believes adamantly that there are enough motivated people for fairer trade systems to flourish.

"The sad thing is my parents used to actually roast coffee beans at home, before coffee became industrialized," he says."Now, if we can get a fresh cup of coffee conveniently without the middleman, we're back in the game again."