Sustainability is not a novel thing. Some studies have shown that most of the existing hunter-gatherers in the world (such as Pigmies in Congo, Agta Philippines and Ache in Paraguay) employ management strategies to protect the group from free-riders and guarantee sustainable use of resources 1. Thus, if we consider them as the closest societies to historical hunter-gatherer groups, sustainability has been part of our goal for as long as our species has occupied the planet. For over 300 thousand years, humans have been seeking strategies to develop in ways that “meets the needs of the present without compromising the ability of future generations to meet their own needs” 2. However, we may not all make it. Sustainability has changed from “the norm” to a rare and uncommon habit. Thus, how we can convince people to start to be conscious about something that seems to be an integral part of our own strategy to live as a group?

I have recently joined Smithsonian as a post-doctoral fellow from the National Zoological Park, Conservation Ecology Center, Working Sea and Landscape, to help answer this question. While this question is not going to be answered during an 18-month long fellowship, we can at least start to think about it, and move some steps forward on our knowledge about sustainability and people, and, maybe, change behaviours.

Supervised by Dr. Peter Leimgruber and Dr. Tom Akre, we are studying the Pantanal wetland cattle ranching system. Located in the middle of South America, the Pantanal is the largest wetland in the world, covering an area of 179 000 Km2 and shared by Brazil, Bolivia and Paraguay. The region faces an annual north-south flood pulse, and between three to four months of the year, up to 80% of the floodplain can be covered by water 3.

The Pantanal was first occupied by outsiders in the early colonization period in America in the early 16th century. At the time, there were several stories pointing out that “Amazonas” [indigenous group of only women], “Silver mountain” [which came up to be Potosi in Bolivia], and “Eldorado” [city of gold] were all located there. European explorers found instead large areas of swamp and millions of mosquitos, abandoning it. Local indigenous groups re-occupied the region, until late 18th century, when they were wiped out by Portuguese slave traders. However, the Pantanal was only fully re-colonized in the late 19th century after the war between Paraguay and the Triple Alliance (Brazil, Argentina and Uruguay) fought over the region. Since then, ranchers have been raising a large quantity of cattle in the Pantanal 4.

The Pantanal flood pulse imposes, however, strong barriers to infrastructure projects and intensification. As a consequence, the Pantanal cattle are raised through extensive management practices, preserving the native vegetation and local biodiversity, which differs from most cattle ranching systems around the globe. Today, albeit hosting a population of 4 million cattle and over 3500 ranches, the Pantanal sees 83% of its native vegetation still standing alongside large populations of nationally endangered species such as jaguars and blue macaw 3. We call it a working landscape, or, as we are dealing with a floodplain, “working wetscape”.

Unfortunately, things are changing. Many ranchers are replacing the extensive grazing practices with intensive ones. Deforestation is increasing fast. New infrastructure projects promise to modify ecological dynamics and open more space for cattle ranching. What has protected the Pantanal from destruction since the late 19th century, may no longer exist in the future. A successful sustainability case study is on the verge of collapse.

In an attempt to celebrate and support the sustainable and traditional cattle ranching system in the Pantanal, the Brazilian Agricultural Research Corporation (Embrapa) created the Sustainable Ranch Label (Fazenda Pantaneira Sustentável) 5. The main goal is to certify those ranches that are economically viable, protecting the environment and demonstrating fair employment conditions. Once certified, ranchers might be able to access tax breaks and loans with low-interest rates.

The certification programme is still initiating, and, first, we must answer fundamental questions about rancher’s behaviour. For instance: “Are ranchers going to participate?”, “What are the main drivers dictating ranchers’ wiliness to join or not join the certification programme?” and “How can we convince ranchers to join the certification programme?”. These, of course, as already pointed out, are not easy questions to answer. However, social sciences have a lot of interesting tools that may help us to better uncover them, such as the Theory of Planned Behaviour, Network analysis, and agent-based models . At the end of the 18 months, we aim to have a better sense of how to utilize these tools and to make progress towards a more hopeful future of the Pantanal.

Sustainability is a difficult goal to achieve. Both small and large societies, with high and low technology, will always have a hard time to convince its members to comply with the rules that will guarantee environment protection and protect themselves from collapse. At the end of the day, people are always hard to convince. Looking at ourselves is a good exercise to understand that. At the same time, it does not mean it is impossible. Social scientists have a long history and amazing pool of research describing how to better analyse human behaviour and decisions. The Pantanal cattle ranching system is an exciting place to investigate that. 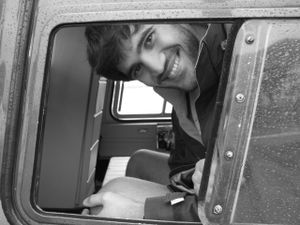 Rafael Morais Chiaravalloti, a Smithsonian Postdoctoral Fellow, is a Biologist who has been working in the Pantanal wetland for over 10 years, especially focused on sustainability of socio-ecological systems. He earned his PhD in Anthropology from the University College of London. Rafael is currently carrying out a research project with Working Land and Seascape, Conservation Commons at the National Zoo, titled “Conserving the World’s Largest Working Wetscape—Developing tools for sustainability and biodiversity conservation in the Pantanal.”