How artists contribute to our collective memory of events

It’s been twenty years since planes crashed into the Twin Towers in New York City, the Pentagon in DC, and a field in Shanksville, Pennsylvania. Growing up in New York, I remember the excitement when the towers were being built and, a few years later, when high-wire artist Philippe Petit walked between the buildings on what seemed to be a magic thread.

SAAM's collection includes several artworks that remind us of the moments of tragedy, the enduring spirit of a nation, and the lasting impact of the events of 9/11. Thomas Ruff’s photo, jpeg de01, appears part dream and part nightmare. With many images of the tragedy on the internet, Ruff downloaded one and enlarged it so that it is pixelated beyond recognition. It is a grey and smokey aftermath of destruction, of the towers, still simmering from the fires and intense heat.

Eric Fischl is another artist in SAAM’s collection whose sculpture, Ten Breaths: Tumbling Woman II, memorializes those who lost their lives. When Fischl spoke at SAAM as part of the Clarice Smith Lecture Series in 2014, he told us "The experience of 9/11, the trauma and tragedy was amplified by the fact that there were no bodies. You had 3000 people who died and no bodies, so the mourning process turned to the language of architecture.” In direct response to the making of his sculpture, he poignantly added, "I extended her arm in the hopes that someone would grab her arm and help slow the tumbling down."

Roy Lichtenstein’s Modern Head has a different story to tell. Originally installed in Battery Park City, one block from the World Trade Center, the sculpture survived the events of 9/11. FBI agents temporarily used it as a message board, taping notes for each other to its base while they worked shifting through the rubble. It was removed from the site in November of that year and is now installed on the grounds of SAAM’s main building in Washington, DC.

Enrique Chagoya was an adult when he came to the United States as an immigrant from Mexico. His print, The Ghost of Liberty, is a response to events that occurred after George W. Bush declared war on Iraq in 2003. Adopting the format of the Mesoamerican codex, or pictorial manuscript, the work is filled with seemingly incongruous cultural, religious, and political imagery. Read from right to left, the references range from the Lone Ranger and Tonto, dinosaurs, to Bush himself. Reoccurring imagery such as a plane flying over Arabic text leave the viewer to create their own interpretation on the eclipse of liberty in the years following 9/11 and the Iraq War.

Kevin Bubriski’s World Trade Center Series, New York City began in the weeks and months that followed the destruction of the Twin Towers. He photographed people who gathered at Ground Zero. Frozen in awe, struck with disbelief, and overcome with loss, people stood before the destroyed building site to confront the horrible tragedy. Twenty years later, Bubriski’s photographs preserve the emotional impact of this infamous day through images of those who witnessed its aftermath first-hand. 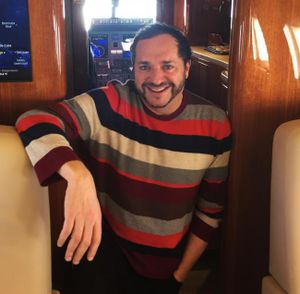 Howard Kaplan is a writer at SAAM