This December, museum staff are grabbing some cocoa and watching classic holiday movies that remind us of artworks from the Smithsonian American Art Museum’s collection

What is cozier than watching old holiday movies on a chilly winter’s night? At the Smithsonian American Art Museum, we make a game out of movie night by spotting the similarities between certain films and artworks in the collection. Share your own favorite holiday movie and American artwork pairings by exploring the museum’s collection and tagging @AmericanArt.

This silly Will Ferrell vehicle tops the list as a sweet family comedy that still elicits giggles as Buddy the misfit elf tries to make sense of life outside the North Pole. His preferred diet, however, is one we are seriously considering embracing for the holidays this year. Artist Will Cotton, known for his paintings of confectionary landscapes, is another Will who knows the allure of pop culture + pure sugar.

For thirty years, little Kevin McCallister has been defending his home from the conniving yet inept Wet Bandits using whatever weapons he could improvise out of household items and electrics. Luckily for thieves Marv and Harry, the McCallister family didn’t have any Man Rays lying around.

“What's that sound? You hear it? It's a funny squeaky sound.”
​—Aunt Bethany

There are so many insane and memorable human characters in National Lampoon’s Christmas Vacation, it is hard to pick just one to talk about. Clark Griswold! Cousin Eddie! Uncle Lewis! Todd and Margo! So, instead, let’s focus on the animal notables, of which there are several. In that category, the all-time scene stealer (in my opinion) comes is the form of an improbably man-eating and magically gravity-defying squirrel. The beast comes flying out of the Christmas tree as if from a slingshot, to a chorus of horror-movie screams—and audience laughter. Hilda Katz’s wild-eyed Squirrel in Tree might be mistaken for its rodent twin.

“And for you Fievel, a new hat. And not just any new hat. A new hat that has been in the family for three generations.”
​—Papa Mousekewitz

This animated musical kicks off during the Mousekewitz family’s Hanukkah celebration, where Papa mouse gives an important gift to his small son Fievel and sings to him about the promise of life in a New World, and the assurance that there are “no cats in America, and the streets are paved with cheese.” Hmmm, these old-world, country mice will have a lot to learn when they make it to New York City. While many cheerier and more famous animated musical films have been released in the decades since, this one still packs a tender if melancholic holiday punch. Just try to listen to “Somewhere Out There” during this year of social distancing and not get a little misty.

Since we are already getting misty, let’s just lean into all the feels and skate away on a river of tears, like Emma Thompson’s character Karen does when she finds out her husband Harry (Alan Rickman) is cheating on her. The memorably devastating scene in this romantic holiday favorite is a reminder that, sometimes, heartbreak and the holidays go hand in hand.

“If this is their idea of Christmas, I gotta be here for New Year’s.”
​—Argyle the limo driver

Ready to move past the tears, and embrace a healthy dose of vengeance? After watching the cheating Alan Rickman in Love Actually, there is something just a wee bit cathartic about seeing the actor work his villainous vibe—and meet his fate—at the Nakatomi Plaza building.

Let us acknowledge up front the existence of a whole world of online discourse around whether Die Hard is or isn’t a Christmas film, which we do not need to get into, though you can guess from its inclusion on this list which side of the debate we take. A more delightful (and less contentious) Internet rabbit hole consists of observations on the way the title of the Bruce Willis classic has been translated into other languages. For example, it is titled “Die Slowly” in German. In Greek it is “Very Hard to Die.” Spanish gives us the evocative title, “Glass Jungle.” But perhaps my favorite is the Norwegian translation, “Action Skyscraper,” which wins the prize for clarity in expectation setting. Howard Cook’s Skyscraper, from 1928 is certainly also worthy of the title “Action Skyscraper,” hulking and ominous in a darkly shrouded sky.

“You're a monster, Mr. Grinch Your heart's an empty hole Your brain is full of spiders, you've got garlic in your soul, Mr. Grinch”

All dogs may go to heaven, but I think we can agree that there should be extra jewels in the heavenly collar of Max the Dog, companion to the garlic-souled, cuddly-as-a-cactus Mr. Grinch. Loyal and true to his undeserving master, very good boy Max puts up with numerous indignities without complaint. Raya Bodnarchuk’s All Good Dogs, carved from white pine, captures the essence of this universally angelic canine spirit. See more good dogs in SAAM’s collection.

Nearly a century old, this scene by an unidentified photographer, Boy with Toy Gun, has shades of Ralphie and his quest for a “Red Ryder Carbine action, 200-shot, range model air rifle, with a compass in the stock and this thing that tells time.”

Please note that although it is an “indescribably beautiful” piece of work, for some reason the Smithsonian American Art Museum does not have a leg lamp in our collection.

“I never thought it was such a bad little tree. It's not bad at all, really. Maybe it just needs a little love.”
​—Linus Van Pelt

Joseph Stella’s drawing, Pine Tree, from 1919, is bringing those Charlie Brown tree vibes. A little wispy, not conventionally beautiful, but full of soul...and a little sappy.

“Strange, isn't it? Each man's life touches so many other lives. When he isn't around he leaves an awful hole, doesn't he?"
​—Clarence the angel

It isn’t hard to imagine how that this black and white etching, The Sleigh Ride, might depict the quaint fictional town of Bedford Falls, setting of Jimmy Stewart’s sentimental holiday classic. Some fans believe director Frank Capra took inspiration from the real-life community of Seneca Falls, New York, another quiet mill town.

Happy holidays from your friends at the Smithsonian American Art Museum. Share your own favorite cinema and American artwork pairings and tag @AmericanArt. 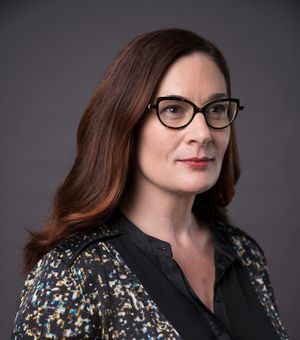