This week, SAAM rolls out a new web series that offers viewers a unique framework for thinking about art. Created by the museum’s interpretation team, Re:Frame aims to make American art accessible and engaging by exploring the unexpected connections between artworks in the collection and other disciplines across the Smithsonian. In doing so, the series not only showcases the breadth of research and collecting that happens at the Smithsonian, but also the wealth of associations and possible interpretations within a single work of art.

Joanna Marsh and Anne Showalter sat down with Re:Frame host and co-creator Melissa Hendrickson, to talk about museums and making a web series.

Not quite like this but I was a drummer in a band for many years, so I performed on stage a lot. However, this is the first time that I’ve been on screen or done anything as professional or polished as Re:Frame.

How did you go from playing in a band to working at the Smithsonian?

Well, it was kind of circuitous, but I ended up going to graduate school to learn how to make museums more accessible and inclusive places for the public. Before coming to SAAM, I worked at the Field Museum of Natural History in Chicago with local Filipinx community members who were helping the museum curate a collection of objects. I also worked at the Museum of Contemporary Art in Chicago, which was my first job in the field of interpretation. That’s when I really fell in love with the type of work our team does here at SAAM. We develop creative ways to help deepen engagement and reach people who may not think art is for them. Re:Frame does that so beautifully because it provides totally different entry points for learning about art.

What do you want viewers to take away from Re:Frame?

Art museums can be really intimidating. People have this perception that there’s a certain way you’re supposed to behave in an art museum and a “right way” to look at art. I think what’s really cool about Re:Frame is that it presents the museum as a place of discovery and shows that there are many ways to approach and understand art. It’s all about your own experience and finding something within the work that feels relevant and authentic to you personally.

Did you grow up going to museums?

Yes, I did. I grew up in an immigrant neighborhood on the deep south side of Chicago and museums were a big deal in my family. We all got really excited about going to museums and they were very aspirational places for me when I was a kid. It felt like something really special was going to happen there. I have the best memories of being in museums when I was young. I got to see a world that was bigger than the place I lived. I would love if Re:Frame inspires viewers to go to art museums, either in their own hometown or here in Washington, DC at the Smithsonian, but I also think the series is an incredible resource for people who don’t live close to a museum. Re:Frame brings American art and the Smithsonian directly to you.

What was the most surprising thing you learned while doing the series?

I think the biggest surprise for me was learning what an incredible array of experts work at the Smithsonian! Who knew that we had a Curator of Space History, or a Curator of Beer? It was amazing to get to meet so many interesting people and share their stories.

Check out the trailer below, then watch all six episodes of Re:frame here. 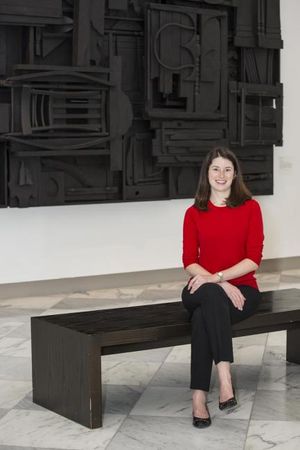