On a slow November afternoon at the Smithsonian’s National Museum of Natural History, exhibit writer Juliana Olsson and intern Myria Perez slipped behind a temporary barrier to sneak a peek at “Sea Monsters Unearthed,” the museum’s newest exhibit scheduled to open the next morning. With the quiet, dramatically-lit space all to themselves, the two reminisced on the years of work that led to this moment.

Juliana: A lot of people go through a dinosaur phase as kids, but I think we can safely say that neither of us grew out of it. What was your paleontology journey?

Myria: I was definitely that kid. My mom would take me to the Houston Museum of Natural Science growing up, and my favorite part was the paleontology hall. I was fascinated with fossils, and I started volunteering at that museum when I was twelve—I was technically too young, but they let me volunteer as long as my mom came along.

Later I started looking at universities with programs where I could work with paleontologists. I really wanted to continue doing fossil prep, and Southern Methodist University was one of the few places that let undergraduates work on fossils. My freshman year I started working in Dr. Louis Jacobs’ lab, and by my junior year he asked me to be an intern on the exhibit team and I said “Of course!”

Juliana: What was it like to go from SMU’s fossil prep lab to the Smithsonian?

Myria: I was very impressed with how the Smithsonian organizes and keeps track of everything, and how well you know your visitors. I hadn’t thought about that before: you all really want to know who’s coming, what people want to see, what’s important to convey to the public and how to convey it to the public. From your perspective, what’s it like to write exhibits at the National Museum of Natural History?

Juliana: As a person who likes all sorts of scientific topics, it’s a lot of fun, because with each new exhibit I get to explore something new. This time, I learned all about mosasaurs, a type of extinct giant marine lizard. And working with SMU, I loved that whenever I had questions, I could just call Louis and Mike Polcyn and get answers from the people who had actually dug up the fossils!

Myria: Was there anything about "Sea Monsters Unearthed" that was different from other exhibitions you’ve worked on?

Juliana: Unlike previous exhibits I’ve worked on that emphasize our museum’s collections, “Sea Monsters Unearthed” provided a unique opportunity to highlight scientific research outside the Smithsonian—the fossils unearthed by Projecto PaleoAngola belong to the people of Angola, and they’ll eventually return home. It was our privilege to display the specimens publicly for the first time, and to introduce visitors to the larger stories they tell about our planet, which align with the Smithsonian’s science.

In general though, our exhibit development process is pretty consistent across exhibits, and the making of “Sea Monsters Unearthed” wasn’t too different from the making of “Narwhal.” I want to hear more about your process instead, the fossil prep process, because you actually got to work on Prognathodon kianda, the star of our show! What were your first impressions of this mosasaur?

Myria: I didn’t know it was going to be part of an exhibit, initially. I prepared its individual vertebrae (there were so many!) down to the fine details. Putting it all together at the end, my perspective changed: I had thought each vertebra on its own was big, but all together I realized how massive and impressive this 23-foot-long animal was. I also studied Prognathodon’s stomach contents, and took CT scans of the braincase of one of its prey items.

Juliana: What are some elements of specimen prep work that you wish people knew more about?

Myria: Each fossil has its own character, it’s an individual and it has to be treated as such. Part of the fossil might be really weathered and crumbly but another part might be really sturdy. So we preparators need a variety of tools. We have mini jackhammers called air scribes that work away at the tougher matrix, and for clearing off smaller stuff, there are my personal favorites, cotton swabs and porcupine quills.

Juliana: Porcupine quills, really?! How do you get them, and what do you use them for?

Myria: I think one of our volunteers knew somebody at the Dallas Zoo. A porcupine quill is rigid so you can scrape off dirt, but it’s made of keratin like your hair and nails so it’s not going to scratch bone like a dental pick would.

Juliana: Your tools are much cooler than mine—a computer, reference books, several dictionaries, a large quantity of pens, and the Chicago Manual of Style.

Myria: What sorts of challenges did you encounter in writing the script, and how did you resolve them?

Juliana: Whenever we have to communicate a complicated concept—like how unrelated groups like mosasaurs and whales independently evolved similar body shapes as they adapted to life underwater—we make prototype labels and evaluate them with actual visitors. We print out panels and ask visitors what they think is going on, and how they would relay that information to a friend or family member. That helps us quickly get a sense of people’s misconceptions about the content. After that, we edit and emphasize certain words, rearrange text and images, and re-test to see if our changes helped.

But honestly, my biggest challenge was to distill a lot of information into 50-word labels!

Myria: Were there any stories you had to leave out?

Juliana: Tons! Projecto PaleoAngola has unearthed many fossils, but because of space constraints we had to restrict our focus to just the Cretaceous fossils.

Early on, we had wanted to use both fossils and living things to show how the formation of the South Atlantic ocean basin created opportunities for some organisms (like mosasaurs) but limited other organisms, like these strange desert plants that used to live in South America and Africa when the landmasses were connected but now only live in Africa. It was a great story but we just didn’t have room so we eventually had to cut it.

It can be hard to delete something you’ve put a lot of effort into. If you cut and paste that text in a separate document, it helps you let go—you can retrieve it if you need to, but usually your story works better without it.

Myria: That actually answered another question I had, about any writing tips for communicating science.

Juliana: I’d also recommend finding analogies or metaphors for complex concepts, adding real voices and personal perspectives, and getting visitors to insert themselves in the story. For example, we encourage visitors to think about how they’d feel about swimming in coastal Angola today versus taking a time machine to visit Angola 72 million years ago—you probably wouldn’t want to jump in the water, there were so many carnivorous reptiles!

Speaking of diving in, what’s it like to finally walk through the finished exhibition space?

Myria: It’s surreal. It’s like a pop-up book: we had the exhibit laid out on paper, and then you walk in and see all the work that’s been done. It’s so cool to see a specimen that you’ve spent so much time with lit up and on display.

Juliana: Does it look how you thought it would?

Myria: Yes! It’s exactly how I pictured it. 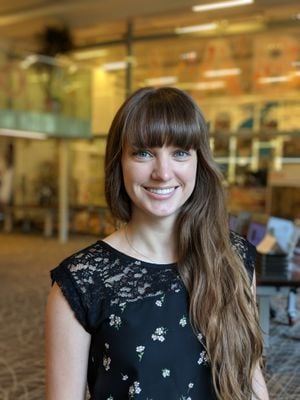 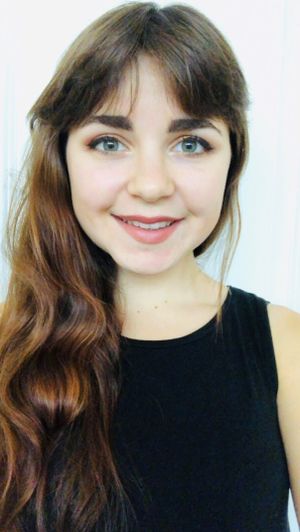 Myria Perez is a fossil preparator for the Perot Museum of Nature and Science in Dallas, Texas. She has gone on many fossil excavations including digging up Dimetrodon specimens in the little town of Seymour, Texas. She grew up with a passion for paleontology that led her to attend undergraduate school at Southern Methodist University. During her college years, she became a summer intern for the National Museum of Natural History and conducted research on ichthyosaurs with paleontologist Dr. Anna K. Behrensmeyer.