Infectious diseases? Illness and death? Humans fighting an invisible foe? "Outbreak: Epidemics in a Connected World" was going to be a real downer of a project. Or that’s what I imagined when I first learned I’d be working on this exhibition at the Smithsonian’s National Museum of Natural History in 2015.

As an exhibition writer, I work with a team of exhibit specialists and scientists to develop exhibitions that help Smithsonian visitors better understand the natural world and our place in it. Viruses may not be as cute as pandas or awe-inspiring as elephants, but they and other pathogens are just as much a part of nature. And humans have been suffering from infectious diseases since our species first evolved.

So I prepared myself to dive into a world of tragedy, heartache, and futility.

But that’s not what I found in the three years that I worked on this exhibition. Surprisingly, I found the opposite: devotion, purpose, and love.

Early in the project, the exhibitions team decided we wanted to highlight the faces and voices of the people who work to identify pathogens, respond to outbreaks, treat patients, and research cures—as well as those who have survived infection. We researched and approached more than 50 people all over the world—42 of whom are featured in the exhibition, telling their stories in their own words.

I became very good very quickly at contacting perfect strangers and persuading them to tell me their stories, which are shared--albeit in a condensed form--in the exhibition. I’d like to introduce you to a few of these extraordinary people.

One of my first interviews was with Professor Mahmudur Rahman, the director of the Institute of Epidemiology, Disease Control, and Research in Bangladesh. With the 10-hour time difference, we had to schedule our phone call for when I was just getting into the office in the morning and Mahmudur was just leaving his. The connection was scratchy, but throughout our conversation I learned about the challenges of educating the public about a new hazard—like the transmission of Nipah virus from the old tradition of drinking fresh, unfermented date palm sap. Every winter, at the start of the season when date palm sap rises, public health messages go out through the villages in Bangladesh advising people how Nipah is transmitted.

Jeanne White-Ginder was someone I had read about in the news in the 1980s when I was in high school. Her son, Ryan White, was infected with HIV from a blood transfusion in 1984, and he spoke out against AIDS-related discrimination until his death in 1990. I learned that Jeanne lived 30 minutes from my parents, so I used a vacation home as an excuse to meet and interview her in person. We spent an afternoon poring over scrapbooks filled with photos and news clippings of Ryan, his sister, Jeanne, and all the people they met through Ryan’s advocacy. I felt as if I were catching up with a longtime family friend as she recounted stories about Ryan and how he continues to inspire her advocacy for people living with HIV.

I found Yvette Raphael, a South African HIV activist, through an Internet search and an article about young HIV advocates to watch. I couldn’t find an email or phone number for Yvette anywhere. But I found her on Twitter and sent a direct message asking her to contact me. We set up a time to talk on the phone in spite of the time difference and my inexperience with international calling. But once we connected, the conversation flowed easily. Yvette told me her story of learning she was HIV positive in 2000 at age 24—a time when her country was in deep denial about the AIDS epidemic. She connected with other HIV-positive people online for support, which gave her the strength to speak out and support other young at-risk women.

Dr. Daniel Lucey is a public health physician and one of the consultants for the Outbreak exhibition. I spent countless hours with Dan in team meetings figuring out how we were going to approach complex topics within the exhibition. It seemed like he had been everywhere there had been an epidemic. He had treated early AIDS patients in the early 1980s, before the disease even had a name. He volunteered in Liberia during the 2014 Ebola outbreak. And while we were working on the exhibition, he traveled to Asia, Africa, and Europe to talk to health professionals with firsthand knowledge of the diseases we cover in Outbreak—Zika, Ebola, Influenza, HIV/AIDS, Nipah, and SARS. But what struck me in all of our discussions was the deep empathy—and really, love—that Dan has for the people who suffer from infectious diseases.

"Outbreak" is not an exhibition about death and fear, but about life and hope. Now, when I talk about the exhibition with friends and family, I share the stories of the people I have met, listened to, and learned from. Each one has a story of bravery, struggle, discovery, resilience, compassion, courage, and love. In the fight against infectious diseases, I’m confident they will be the winners. 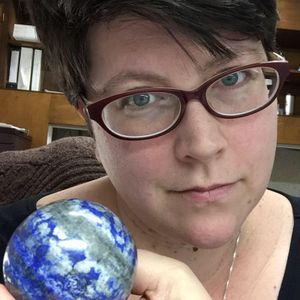 Angela Roberts Reeder is the lead exhibit writer/editor for the “David H. Koch Hall of Fossils—Deep Time.” Her mission is to pique visitors’ curiosity about the natural world through engaging stories and plain language. She works closely with exhibition, education, and scientific staff to craft exhibition messages, ensure scientific accuracy, avoid jargon and negotiate word counts. She received her Masters of Arts in Teaching from the Museum Education Program at George Washington University in 1998.