Our readers have a boundless curiosity—and so do my children. I am a mother of two young girls, so I am always playing to their sense of wonder. At dinner, our family shares something new we learned. For me, as an editor at Smithsonian, the fun factoids come easily. Did you know the Paris Aquarium has taken in more than 1,000 unwanted goldfish? Or that scientists are using eggshells to actually grow bones? There is a chapel located inside a volcano in Spain!

It’s no wonder, then, that my favorite children’s books of this year are those that deliver a smattering of trivia and inspire a sense of awe in the world around us. Millie Marotta’s A Wild Child’s Guide to Endangered Animals invites young readers into a zoo filled with rare yellow-eye penguins, Gobi bears and giant anteaters. Meanwhile, Dr. Seuss’s Horse Museum delves deep into art history. But amid all the knowledge, this year’s books leave ample room for fun. In My Tiny Pet, author Jessie Hartland will have adults and kids laughing over a character proposing a very unique pet while her parents make every effort to “Simplify!” And in If I Built a School, the illustrations by Chris Van Dusen will leave you inspired to invent the future. 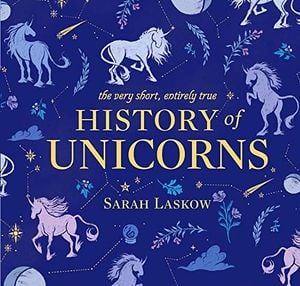 For me and my daughters, unicorns are a very real part of our world. So, when Sarah Laskow’s new book hit shelves this past summer, unpacking the “very real history of why we once believed these mythical creatures existed,” I was eager to provide some depth to my daughters’ fascination. Did you know, for instance, that the earliest illustrations of a unicorn dates to the year 545? Or that people, for centuries, thought that narwhal tusks were unicorn horns, and that they were imbued with medicinal powers? The little book is chock full of truths about the mythical beast. 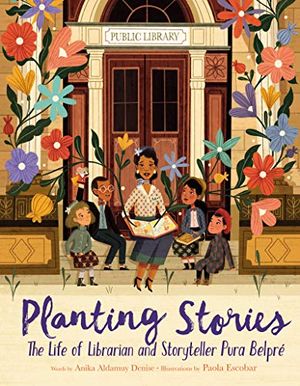 Planting Stories: The Life of Librarian and Storyteller Pura Belpré

The most compelling picture book biographies, in my opinion, are those that celebrate the unsung heroes of history. A favorite this year is Anika Aldamuy Denise’s Planting Stories, about Pura Belpré, the first Puerto Rican librarian in New York City. Belpré, who was hired in the 1920s as a bilingual assistant at the 135th Street branch of the New York Public Library in Harlem, once wrote, “I thought of myself as a storyteller. I wished to be like Johnny Appleseed, who in the United States was known for planting apple seeds across the land…. And so I wished to plant my story seeds across the land.” In the richly illustrated, bilingual book, Denise describes how Belpré introduced Spanish books to the library, writing the “first mainstream Latinx storybooks published in America.” From the librarian’s bilingual story hours and puppet shows grew a thriving community of Spanish-speaking library-goers. 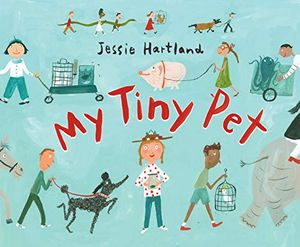 The tiny house movement inspired Jessie Hartland to write and illustrate her latest book, My Tiny Pet. In it, a family downsizes from a “ginormous house on a tall hill in a big, noisy town” to a small cottage in the woods, and in the process gives up a houseful of pets for adoption. After the move, the only child, a young girl, makes a plea for “just one” pet. Luckily, she’s got a rock-solid argument for why she should be the owner of a microscopic water bear. The book has my own daughters wanting to get some moss from our backyard under a microscope to hunt for their very own tardigrades. 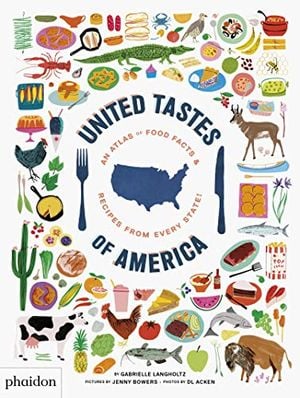 United Tastes of America: An Atlas of Food Facts & Recipes from Every State!

This cleverly-titled anthology of American food will whet the appetites of even the pickiest of little eaters. For each state, plus Washington, D.C. and the territories, author Gabrielle Langholtz offers up lavish spreads of illustrated food facts followed by a kid-friendly recipe—everything from Connecticut’s clam pizza and Colorado’s cowboy charro beans to South Carolina’s buttermilk pie. Selecting a state recipe or two is a delicious way to make storytelling a tasty affair. 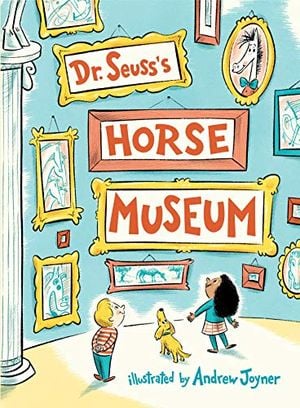 In 2013, Audrey Geisel, wife of the preeminent Ted Geisel (a.k.a. Dr. Seuss) discovered in a box in her late husband’s studio a forgotten manuscript. The book, titled Horse Museum, was most likely written in the early 1950s. She immediately contacted Beginner Books, the publisher who brought most of the Dr. Seuss works to print. According to Taylor Dafoe at Artnet News, the publishing house’s president showed up to Audrey’s La Jolla home just days later to assess the find. Now, six years later, the treasure can be enjoyed by the rest of us. In Dr. Seuss’s Horse Museum, a talking horse guides readers through reproductions of more than 30 famous works of art featuring horses. (Illustrator Andrew Joyner used original sketches by Dr. Seuss found with the manuscript for guidance and then filled in the gaps.) From prehistoric cave paintings of horses to Eadweard Muybridge’s black-and-white photograph The Horse in Motion to Pablo Picasso’s Horse’s Head, the whimsical exploration of art history drives home a clear message: there are so many different ways of seeing. As Dr. Seuss puts it, “what an artist tells us about horses and how they tell us is different for every artist.” 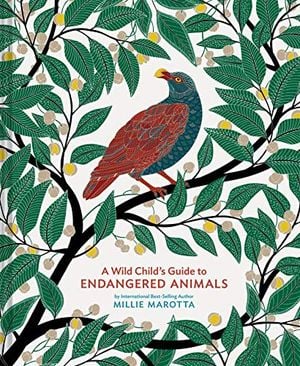 From her seaside studio in West Wales, Millie Marotta brings us an encyclopedia of some of the world’s most endangered species, all described and intricately illustrated. “While we know the plight of the mighty elephant, charming giant panda, charismatic chimpanzee, and magnificent polar bear, what of the other vanishing species whose stories are not often told?” writes Marotta in the book’s introduction. Within these pages, readers are introduced to more than 40 animals “literally hanging on for dear life” in our planet’s oceans, forests, deserts, lakes, rivers, grasslands, mountains, tundras and wetlands. Tiny pupfish that live in the middle of the desert, the only wild camels left on Earth, and lobsters the size of terriers will, no doubt, instill an appreciation for the diversity of life. 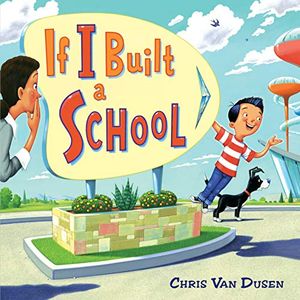 Following in the illustrious path of his If I Built a Car and If I Built a House, author and illustrator Chris Van Dusen now brings to the stage his delightful If I Built a School—a title his young fans reportedly have been begging him to create. In it, the story’s protagonist, Jack, like aspiring class presidents have done for years, promises a school of kids’ dreams. His vision is complete with hover desks, time travelers in hologram form (“You might meet a T. rex or Abraham Lincoln!”) and a robo-chef named Pete who “can make anything, simple or weird—from PB & jelly to squid, lightly seared.” It’s no surprise—with the pneumatic pods transporting students in vacuum tubes, submarine bikes in the school’s pool and classrooms with roofs that open like flowers—that Van Dusen was inspired by the retro-futuristic illustrations in 1950s and ‘60s-era issues of Popular Science. 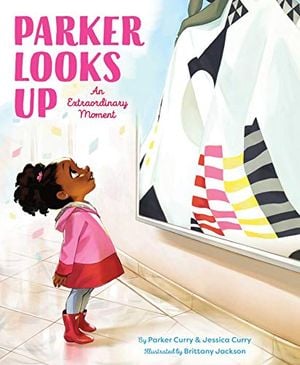 Parker Looks Up: An Extraordinary Moment (A Parker Curry Book)

In March 2018, a photograph of two-year-old Parker Curry gazing in awe at Michelle Obama’s official portrait at the Smithsonian’s National Portrait Gallery went viral. That October, the young girl dressed up as the First Lady for Halloween, donning a dress like the geometric Milly gown in portraitist Amy Sherald’s painting. Well, now, four-year-old Parker and her mother, Jessica Curry, have penned a story about the transfixing experience. “In that moment, Parker saw more than just a portrait,” they write. “She saw a road before her with endless possibilities.” The story is one that hits home, quite literally, for us at Smithsonian, given that this special moment occurred at a Smithsonian museum. It’s also quite fun to see some of the National Portrait Gallery’s other treasures—Betsy Fraves Reyneau’s George Washington Carver, Magda Pach’s Frida Kahlo and Max Westfield’s Albert Einstein—gracing its pages. 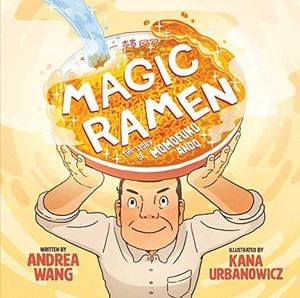 This new picture book biography by Andrea Wang tells the story of Momofuku Ando, the Taiwanese-Japanese businessman who invented instant ramen. (Warning: Reading this on a cold, snowy day will give you a serious hankering for the stuff. Just ask my five-year-old.) It follows Ando through his trial-and-error experimentation to make noodles that could be made “anywhere, anytime” with hot water in just a few minutes. Moved by people waiting in long lines for ramen noodle soup in Osaka, Japan, just after World War II, the inventor is driven by an idea: “The world is peaceful only when everyone has enough to eat.” As Publisher’s Weekly notes, “Starry-eye as it may sound, the goal of peace through food seems important—and possible—by the story’s end.” 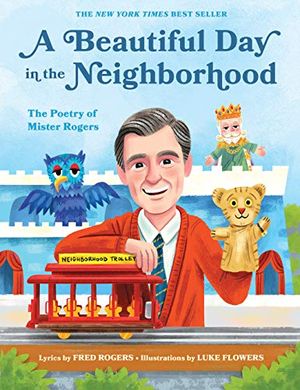 While Tom Hanks lights up the big screen as Mister Rogers in A Beautiful Day in the Neighborhood, a first-ever collection of 75 of the legendary children’s television host’s songs is on shelves, inviting readers of all ages to bask in his warm advice. Fred Rogers’ poetry may be just what’s needed to tackle big feelings (“What Do You Do with the Mad That You Feel?”), real fears (“You Can Never Go Down the Drain”), and the struggles of everyday life (“It’s an Ugly Day”).