The title to the contrary, River Run is, as it turns out, a good deal more than a cookbook. Recipes abound, sure enough; open the pages and you’ll discover a trove of no-nonsense, dependably lucid instructions that will result in ambrosial pancakes, really amazing coleslaw or authentic jambalaya. (Quiet reassurances underlie all directions: the reader is informed, for instance, that aspiring barbecue chefs can, in a pinch, "forget the smoking and just use your oven. Purists will disagree, but you can make BBQ to be proud of right in your own kitchen.")

With restaurateurs Jimmy and Maya Kennedy and writer Marialisa Calta as your guides, armchair travelers can pull right up to a little white-frame cottage, home to the River Run Restaurant, and wade into the life of a rural New England village (Plainfield, Vermont, population 1,300). Plainfield is long on quirky charm; the town’s unexpected diversity is reflected every day in the folks who show up to eat the kind of memorable, homemade food that is fast disappearing from our own family fare. On any morning of the week, one might rub elbows, literally—there are only 24 tables and people need to share space—with an Argentine-born puppeteer, a carpenter, a baker, the high school soccer coach, a piano tuner, a couple of farmers, several members of the volunteer fire department, an artist. A handful of Goddard College students. And the occasional celebrity—playwright David Mamet, New Yorker cartoonist Ed Koren, novelist Howard Norman. That’s just for starters. "River Run," write the Kennedys, "is not only a restaurant but a gathering place for friends and neighbors." 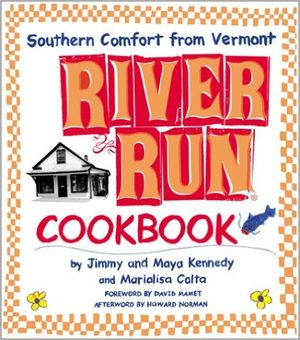 Inspired by both Jimmy's Mississippi upbringing and its rural surroundings, River Run's menu blends traditional Southern favorites with a touch of the North.

Given that good-natured approach to day-to-day existence, it’s only natural that this cookbook also offers the transcript of a page from the town constable’s log: "1 P.M. Receive call from Betty Caruso, live animal in feedbag on Lower Road. Investigate. Long-haired black cat in bag. Escapes into woods. Notify neighbors.” Or an homage to the town barber, Bill, whose shop was located for years in the building now occupied by River Run. Or a discourse on farmer Bill Smith’s traditional maple sugaring operation, accompanied by a sixth grader’s "Mud-Season Poem": "You might get stuck/In the gluck/Unless you have a 4WD truck." Or a recipe contributed by David Mamet (his offering, predictably, relies on one part machismo, one part grit, invoking burnt toast and the exertions of the volunteer fire department)

There’s an undeniable North meets South exuberance to the River Run cuisine, reflecting the restaurant’s roots. Jimmy Kennedy grew up learning his way around the kitchen from his mom in Brewer, Mississippi (hence the variations on the theme of catfish), and his wife, Maya, in Plainfield (that’s how the maple syrup made it into the marinade). No doubt readers are going to hurtle toward their kitchens, wanting to whip up the dishes—soups and stews, griddle cakes and fritters, salads and side dishes, desserts and more—chronicled in mouthwatering detail here.

But in the end, it’s really as much about friends as about food. The pictures tell the story: rather than a succession of images trumpeting glossy, Martha Stewart-stylized entrées, one discovers black-and-white photographs, affectionate portraits all, of the people who cook, and eat and while away the hours, at the River Run home-away-from-home.

Kathleen Burke is a senior editor at ​Smithsonian​ magazine.