Looking for some analog fun this holiday season? Bring a board game to your next family gathering.

“I have a Playstation and a [Nintendo] Switch at home, and I’d rather play Tapestry,” says Taylor Jenkins, owner of Philly Game Shop, a board-game store and community space that recently opened in Philadelphia. Her operation is one of a wave of board-game focused businesses. “We’re about to be home to three board game cafes,” she adds.

Why are board games so popular? Jenkins theorizes that it’s about social connection — you can play a board game by yourself, but why bother? — combined with the destigmatizing effect of shows like “Stranger Things.”“It’s not shameful to be geeky anymore,” says Jenkins.“That has freed up people to enjoy things they may have shied away from in high school.”

This year, even self-described board game geeks who may think they’ve seen it all should have new appreciation for this year’s unique, accessible game themes (who would have guessed a few years ago that a game about birds would be so popular).

To pull this list together, I interviewed board-game designers, store owners and critics to hear about what they thought were the best games of the year. Read on to find out how to provide your whole family some old-fashioned fun this year. No electricity required. 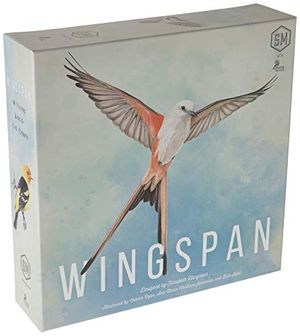 Good for: The birder in your family
Kind of like: Somewhat similar to Gizmos and Space Race from our 2018 list
Players: 1-5

The winner of the prestigious 2019 Kennerspiel des Jahres award, Wingspan has players take control of a bird sanctuary, competing to attract the best birds. The original game features 170 birds found in the Americas (an expansion, also out this year, adds 81 birds native to Europe), and, almost unbelievably, every bird card found in the game has powers and abilities that mimic the real-life bird. In the game and in real life, a cowbird lays its eggs in other birds’ nests, an eagle preys upon smaller creatures, and vultures eat other birds’ leftovers. “It’s just so well made,” says Lauren Woolsey, a board game designer and co-host of the Playability podcast.

It’s also what Jenkins calls an example of “serene gaming,” where the relaxing art style and indirect rather than direct competition lets people play without getting so heated as to flip the table.

Don’t make the mistake of thinking the game is “edu-tainment”—the game is a fun, competitive engine builder that just happens to be about birds. Famed birdwatcher and former Secretary of the Smithsonian S. Dillon Ripley would have approved. 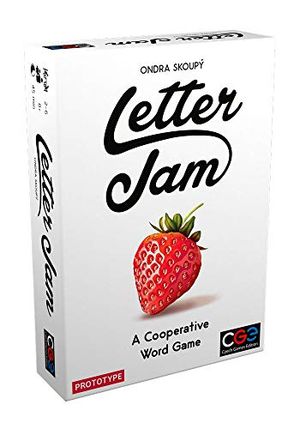 Good for: Word-game fans
Kind of like: Co-operative hangman
Players: 2-6

You and your friends are trying to guess secret words you’ve each been given. But you can’t see any of the letters in your own word—only those of the other players, and only one letter at a time. By giving structured clues about those letters, players cooperate to help each other guess their words.

“It really feels like a cool puzzle that you and your friends are solving together,” says Calvin Wong, a freelance writer and board game critic (who occasionally writes reviews in limerick). AnnaMaria Jackson-Phelps, editor in chief of Girls’ Game Shelf, goes further: “It’s my favorite word game of the last decade.” Unlike games like Boggle or Scrabble, you don’t need a huge vocabulary or to have memorized obscure lists of words, so it’s accessible to players of all levels, and if you’re playing with younger ones, it’s easy to adjust the difficulty (though kids younger than 10 will find it difficult).

If you’ve played Hanabi, you’ll love Letter Jam. “It is such an interesting game and so many interesting ways to play around with the rules once you know how to play,” Woolsey says. 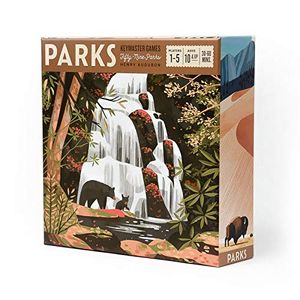 Good for: Nature lovers
Kind of like: Tokaido
Players: 1-5

“Gorgeous and fun to play,” says Jackson-Phelps. “It’s easy to teach and easy to learn,” adds Woolsey. Who wouldn’t love a game about hiking through America’s national parks, featuring art designed to support and celebrate the U.S. National Park system?

In this game, players hiking along trails collect gear, take photos and eat snacks over the course of four rounds (“seasons”). Each season, the trails change and grow longer. The goal is to visit as many National Parks as possible, as symbolized by beautifully illustrated cards depicting each of the country’s parks. The high production quality (metal tokens! Cute little wooden animal pieces!) won over our interviewees as did the fact that a portion of sales every year will go to the National Park Service. 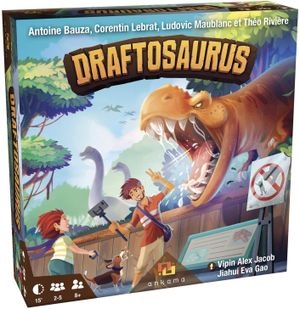 Ankama Draftosaurus - Bringing The Jurassic Era Alive- in Draftosaurus, Your Goal is to Have The Dino Park Most Likely to Attract Visitors, Family Fun Drafting Game, for 2 to 5 Players, Ages 8 and Up

This kids’ game (good for ages 8+) gives kids and adults the chance to build their own dinosaur park. Players compete to select various dinosaurs to put in their pens, with restrictions on where dinosaurs can live (the Forest of Sameness needs all the dinosaurs to be the same species, while the Prairie of Love gives points for every pair of same-species dinosaurs, and so on). “It’s a really fun, super-short game,” Woolsey says. “It’s simple, it’s cute, and kids like being able to pick the different dinosaurs.” 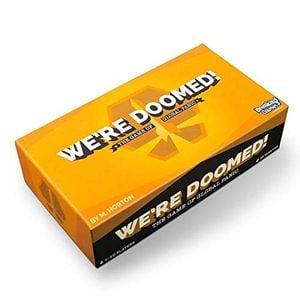 We're Doomed! A Fast-paced, Cooperative, Party Game for The End of The World!

Good for: Large groups
Kind of like: Ever heard of the prisoner’s dilemma? That, but it’s fun
Players: 4-10

We’re Doomed may be peak 2019. Players are world leaders trying to build a rocket to escape our doomed planet before time runs out and an unspecified disaster—presumably a giant meteor or, y’know, the climate apocalypse—ends humanity. In true “tragedy of the commons” style, players must cooperatively add resources to a pot to ensure the rocket gets built (not enough resources, and you’ll burn with the plebes). But only the player or players with the most influence will be allowed onto the rocket, so it’s a matter of balancing the spirit of cooperation with ruthless individualism. Cards drawn at the end of each very short round change the rules of the game, sometimes in wacky ways. Oh, and did we mention you only have 15 minutes to win? 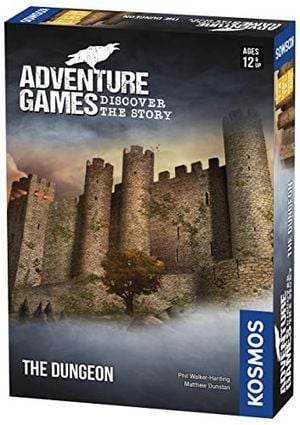 Good for: Choose-Your-Own-Adventure fans
Kind of like: Well, that
Players: 1-4

From publisher Kosmos, which brought gamers the “Exit” series of escape-room-in-a-box games, comes a new, slower-paced experience. The “Adventure Games” series still tasks players with teaming up and solving a mystery, but “Adventure” is more story-focused. With no timer and fewer puzzles to solve, players will instead immerse themselves in a storyline.

“Monochrome Inc” has players breaking into a top-secret research facility to steal a mysterious drug, “The Dungeon” is a medieval jailbreak story, and “Grand Hotel Abbaddon” (out next year) promises to be a paranormal adventure. Each game is broken up into “chapters” so that players can pause at natural stopping points (recommended, because each chapter takes about 75 minutes to play).

“It is really intriguing,” says Woolsey. “I wasn’t sure what to think when someone brought it to game night but I’ve been impressed.” 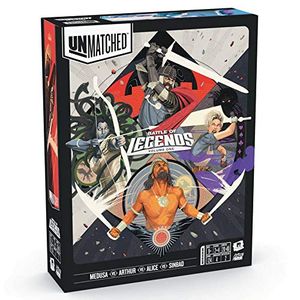 Good for: Anyone who ever wondered who would win in a fight: Alice in Wonderland or a velociraptor
Kind of like: Street Fighter, but a board game
Players: 2 or 4

“It takes 20 seconds to set up, and I can teach it in two minutes,” Wong says. But this card-based fighting game has deep strategy to it. Each player takes control of a different character. In one set, there’s Alice from Wonderland, King Arthur, Medusa and Sinbad the sailor. In another set, you get Robin Hood and Bigfoot. A third pits the humans from Jurassic Park against raptors. Sets are standalone, so if you only care about dinosaurs, just buy one — or buy multiple and mix and match. Each character has abilities unique to them: Alice can shrink and grow, and timing your size changes will be crucial to winning the game, while Bigfoot gets extra points for disappearing after an attack. “You can’t just, ‘If I move here I do this.’ If you do that, you’ll lose.” Upcoming sets promise to add characters from “Buffy the Vampire Slayer,” Sherlock Holmes and more. 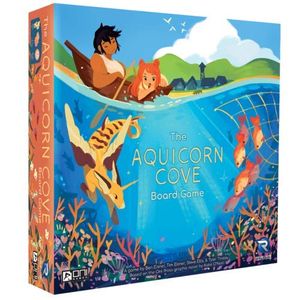 Good for: Budding environmentalists
Kind of like: Pandemic, with adorable creatures and a save-the-earth message
Players: 2-4

Based on the kids’ book of the same name, this game puts kids and adults in charge of rebuilding a fishing village sustainably. Players work together to feed their village without depleting the fish and coral reefs that surround the village. Luckily, players have the help of the aquicorns, mythical creatures that guard the reef. “Conceptually,” says Jenkins, “It’s the right game for the times.” It doesn’t hurt that the aquicorns are just plain cute. 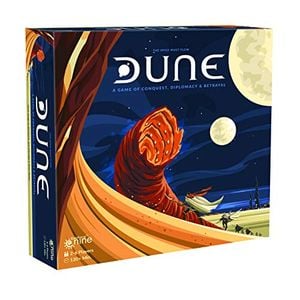 Good for: Your serious gamer friends or anyone who has ever said “I control the spice” unironically
Kind of like: A Game of Thrones: The Board Game
Players: 2-6

Following the success of the 1965 novel Dune, a sprawling sci-fi epic spanning politics, ecology, religion and technology, Dune, the board game, came out in 1979. A reprinting in 1984 to coincide with the David Lynch film adaptation, however, tanked sales of the game and it quickly went out of print, becoming a cult classic. Now, four decades later, the game has been re-released to critical acclaim. This asymmetric strategy game (meaning each player has different abilities and goals) looks heavier than it is, Jenkins says. Although, “if you have a chaos friend, it’s going to be a long night,” she adds. Choose your favorite Dune faction (enjoyment of this game is likely predicated on having a favorite Dune faction) and battle for control of Arrakis. 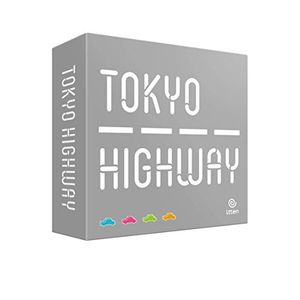 Good for: Anyone who wants to up their Jenga! game to the next level
Kind of like: Operation!, with cars instead of organs
Players: 2-4

This 2018 dexterity game gains a new twist with a 2019 expansion (“Cars & Buildings”) which adds variety and new obstacles. In both the base game and the expansion (not a standalone game), players recreate the Tokyo Metropolitan Expressway, also known as the Shuto Expressway, also known as “a nightmarish 320km marble run of sharp curves, on-ramps, off-ramps, and multi-lane merges that registers use by approximately one million cars every month,” according to one expat. Players take turns placing columns (wooden cylinders) and roads (essentially gray popsicle sticks), trying to build roads that overtop their competitors, or in some cases undercut them. Be careful, though, because if you bump the table and send competitors’ pieces flying, you’ll have to pay a steep penalty. Jackson-Phelps says this game has a “unique, different” table presence. And yes, for careful placement of your pieces, tweezers are included.

Having trouble seeing our list of games? Turn off your ad blocker and you'll be all set. For more recommendations, check out The Best Books of 2019.