A few miles before the Danube reaches Budapest, the river turns to the south, flowing parallel to one of its mightiest tributaries, the Tisza, some 70 miles to the east. Between them lies the heartland of the Great Hungarian Plain. Without natural barriers, this wild grassland was for most of history a passage for warriors: first the Huns, then the Mongols, and later the Turks, who occupied it for 150 years until they were finally expelled in 1699. Along the tense border zone, they left a culinary legacy: coffee and coffee shops, the thin-layered pastry now known as strudel, and chili plants. Recently introduced from the Americas, probably Mexico, chilies had delicate flowers and hollow berries that ripened from green to shades of yellow and red. Nobles grew them as ornamentals in their walled gardens, whence they gradually made their way to the garden plots of peasants. By the end of the 19th century, the Hungarians had bred new varieties of chilies, found ways to process them, and created their defining spice, paprika. They sprinkled the red powder on bread and lard, or on fresh cheese, added it to their salami, introduced it into their river fish soups, and used it in abundance in their new national dish, goulash.

The invention of goulash began with one of the humblest groups in Hungarian society, the cowherds, according to the distinguished Hungarian ethnologist Eszter Kisbán. Groups of five or six single men, with their dogs and a couple of horses to pull their supply cart, spent months or even a year at a time out on the plains tending tall, slender gray cattle with long upturned horns. They cooked for themselves in large cauldrons slung from a pole supported by posts over an open fire, using simple, nonperishable supplies: millet, lard, bacon, onions, salt, and sometimes black pepper. If one of the cattle died or was slaughtered, the cowherds would feast on a rare dish of fresh meat, a simple stew made by browning the meat in lard and onions, adding water and, if available, black pepper. At some point, they began substituting coarsely ground dried red chilies from home gardens for the pepper. In the villages, some unknown innovator had rediscovered what was already known in the Americas, that chilies could be dried, crushed underfoot, and pounded in a mortar. By the end of the 18th century, travelers were commenting on this rough, spicy peasant dish that left a pleasant warmth in the stomach. Since the Hungarian term for herdsmen was gulyás, the travelers called this herdsmen’s meat, or gulyás hús.

Those wealthy and educated enough to write about their travels came from the other end of the social spectrum, the aristocracy. The sale of cattle, driven to distant markets in Vienna, Venice, and northern Germany, often provided much of the nobles’ income. But cowherd’s meat, while a novelty to try on the plains or when hunting, was no more likely to appear on their tables than chuck wagon cuisine was to be on a dinner party menu in New York or San Francisco. In the grand castles on their estates or their town houses in Budapest or Vienna, the aristocrats dined on a cosmopolitan haute cuisine prepared by French-trained chefs and conversed over dinner in German, French, or Italian.

It was the far less wealthy petty nobility who paved the way for goulash’s ascent up the social scale. Resentful that they were now ruled by the Habsburg dynasty and irritated that German was the official language, they emphasized their Magyar (Hungarian) customs. Like other nationalist movements that emerged in the early 19th century, they took up the romantic vision of a nation’s essence being expressed in its language, its landscape, and its peasant culture. Writers began publishing newspapers in Hungarian, collecting folk tales, and authoring plays and poems about their country’s glorious past. Composers adopted the rhythm of the peasant dance, the csárdás, which became respectable in urban ballrooms. Painters depicted noble herdsmen with their wide trousers, hats with upturned brims, and embroidered waistcoats.

So it is scarcely surprising that vigorous, red, utterly Hungarian goulash began creeping into urban kitchens, cookbooks, and restaurants in the 1830s, despite hostesses’ fears that it was too crude for ladies. It gradually displaced the standard pallid sauerkraut with meat (similar to the French choucroute), common to all of central Europe. This complemented its earlier entry into humbler kitchens when black pepper soared in price in 1806 after a Napoleonic embargo on the import of foreign goods to the Continent. The final step in the dish’s adoption as a national symbol, now under the peasant name pörkölt, came during the difficult years following a failed revolution in 1848-49, when Hungary was firmly under the heel of the Habsburg emperor.

Now the problem was supply. Peasant gardens and hand processing could not produce enough paprika for the market. In 1867, Hungary was granted greater autonomy, and the new government encouraged economic development. The cowherds dwindled in number as the plains were transformed from grazing fields to rich farmland. Before long, Hungary was producing the finest white flour in the world for the delicate pastries of Budapest and Vienna, thanks to improved methods of milling. Hungarian wines from new vineyards and fruit brandies became famous across Europe. Chili peppers flourished in the hot summers of the southernmost parts of the Hungarian plain, particularly around the ancient towns of Szeged and Kalocsa. Growers carefully transplanted seedlings in the spring, protected them from sparrows and pigeons, weeded and watered them, and then harvested the individual chili pods as they began ripening in early September. Girls armed with six-inch steel needles threaded the pods on strings six to eight feet long before garlanding them on racks and house fronts to dry until the seeds rattled.

Then it was the turn of the processors, whose job was to reduce the tough chili skin to a powder. The külü, a heavy beam on a fulcrum, replaced foot treading, increasing the output of a single worker to 20 pounds of spice a day. This, in turn, was replaced by grindstones, which heated the paprika sufficiently to melt the oil in the seeds. It coated the powder from the ground pods, preserving its much sought after bright red color. By the beginning of the 20th century, 12 to 15 paprika mills lined the banks of the Tisza River in Szeged. Customer demand for a milder—but still colorful—spice was satisfied when János and Balász Pálffy, two smiths in Szeged who had toured the factories of Western Europe, invented a machine to split the dried peppers and remove the white ribs and seeds, the source of the chilies’ heat.

With this new Szeged “noble sweet” paprika, dishes could be created that satisfied even the refined tastes of the aristocracy, especially when made with veal or then-prestigious chicken, and softened with the addition of sour cream. France’s Auguste Escoffier, who was happy to be called “the king of chefs and the chef to kings,” imported paprika from Szeged and served Goulash à la Hongroise in Monte Carlo in 1879. When Escoffier included the recipe in his 1904 Le Guide Culinaire, a worldwide reference, he ensured its place in the fine dining traditions of Europe. Károly Gundel, one of Hungary’s most esteemed chefs, the owner of the celebrated Gundel’s in Budapest, and a mentor to later generations of cooks, included not one but many variants in his cookbooks. By the end of the 19th century, goulash was firmly in the international lexicon of cookery for beef stew seasoned with paprika—except, oddly, in Hungary where the term “goulash” was reserved for soups and “pörkölt” was used for the stew. Goulash had climbed to the highest social levels.

Nowhere did goulash become more popular than in North America. It was probably introduced by the first wave of Hungarian migrants, who came following the failed revolution of 1848. Later, when Hungarians too poor to have enjoyed such a rich meaty stew in their home country arrived in the United States and Canada in the early 20th century, they discovered that goulash was widely known. By 1969, a Gallup Poll found that goulash was one of the five most popular meat dishes in the U.S.

Back in Hungary, the choice of paprika as the national seasoning seemed wholly justified when Albert Szent-Györgyi, a professor at the University of Szeged who came from a noble Hungarian family, was awarded the 1937 Nobel Prize in Physiology or Medicine. Having established the chemistry of vitamin C, he analyzed paprika grown and processed just a short distance from his office and continued his research using the vitamin-C-loaded spice. No wonder George Lang, the Hungarian-American director of the Café des Artistes in New York, who restored Budapest’s Gundel restaurant following the fall of communism, described paprika as being “to the Hungarian cuisine as wit is to its conversation—not just a superficial garnish, but an integral element.”

Chilies come in dozens of varieties, each with a distinct color and flavor. When they are dried and ground, chili powder is the result. Paprika is only one of a large number of such powders, including cayenne pepper; pimentón from Spain; guajillo, ancho, pasilla, and other powders from Mexico; and even good old American chili powder. They are not interchangeable: pimentón is smoked, cayenne is hot, Mexican powders have distinct flavors, and American chili powder contains considerable amounts of ground cumin. In all cases, the quality of the chili, the care taken in processing, and freshness determine how good the powder will be.

To buy paprika in Budapest, the Central Market Hall (Nagy Vásárcsarnok) on the Pest side of the Szabadság Bridge is well worth a visit.  With its three levels of stalls and stands flooded with light from soaring windows, it is a cathedral to food. Those in the know suggest that best of all are the jars of homemade paprika offered by small vendors in this and other markets. Also intriguing are the museums dedicated to the history of paprika in Kalocsa and Szeged, each about a two-hour day trip from Budapest.

The paprika you are most likely to encounter in the United States, often found in a distinctive can decorated with the red, green, and white colors of the Hungarian flag, is the light red “noble sweet” (édes nemes). It comes from a mild variety of chili. Paprika scorches easily, so to use it in goulash, fry your onions in the oil or fat of your choice—lard if you want true Hungarian flavor—allow it to cool, add the paprika, and stir. Then add your other ingredients and water before returning the pot to the heat.

Many other Hungarian varieties are available. “Special quality” (különleges) and “delicate” (csemege) are excellent mild grades. If, on the other hand, you want a paprika more like the original used on the Hungarian plains, you might try a pungent Erős Pista (Strong Steven), a popular Hungarian condiment. It is a coarser, hotter spice that still contains the capsaicin seeds. Or, if you like a smoky flavor, look for smoked paprika (füstölt). Finally, paprika and goulash “creams,” the latter including onions, tomato purée, and flavorings, are now sold in tubes and jars. Édes on the label indicates it is a mild chili, erős a hotter one. 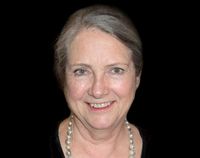 Rachel Laudan, an Austin-based historian and writer, has lived and dined on five continents, as well as the Hawaiian Islands. Her award-winning book Cuisine and Empire: Cooking in World History explores 5,000 years of global food connections. (Photo Credit: Larry Laudan)