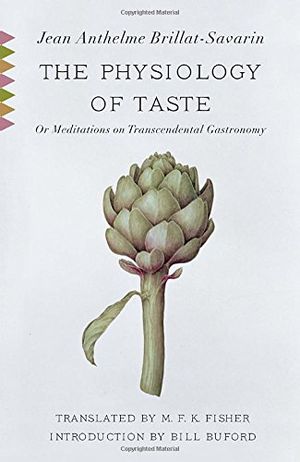 The Physiology of Taste; or, Meditations on Transcendental Gastronomy

The essay below is excerpted from Jean Anthelme Brillat-Savarin’s "The Physiology of Taste; or, Meditations on Transcendental Gastronomy." The culinary classic was first published in France in 1825, two months before his death. In one form or another, and under different titles, the book has been in print ever since. It is part philosophical musing and part anecdotal memoir, with large helpings of scientific observation (for the age) and witty asides. In this excerpt, from the 1949 M. F. K. Fisher translation, Brillat-Savarin investigates the mysterious effects of truffles.

It is a long time from the Romans until now, and the renewal of a taste for truffles is fairly recent, for I have read several old pharmacy manuals where no mention of them was made: it could almost be said that the generation which lives and breathes at this moment of writing has witnessed that renaissance.

Truffles were rare in Paris as near ago as 1780; they could be found only at the Hôtel des Américains and the Hôtel de Provence, and then in but small amounts; and a truffled turkey was a luxurious item which could be seen only on the tables of the highest nobility or the best-paid whores.

We owe their increasing presence to the merchants of fine edibles, whose number also has increased greatly, and who, seeing that this certain article was in high favor, have bought it up all over the kingdom and who, paying high prices and ordering it to be shipped to Paris by messenger and by fast coach express, have caused a general wide- spread hunt for truffles (this last being necessary since, impossible as they are to cultivate, it is only by careful search that the supply of them can be added to).

It can be stated that at this moment the glory of the truffle is at its peak. No man would dare assert that he had dined at a table where at least one truffled dish was wanting...

A sauté of truffles is a plate which is concocted and served by the mistress of the house herself; in short, the truffle is the diamond of the art of cookery.

I have looked for a reason for this preference, for it has seemed to me that many other foods had an equal right to it, and I have found it in the general conviction that the truffle contributes to sexual pleasures; moreover, I have been led to conclude that the greatest part of our perfections, our predilections, and our admirations spring from the same cause, in so powerful and general an homage do we hold this tyrannical, capricious sense!

This discovery of mine led me on to wonder if the truffle’s amorous effects were real, and the opinion of it based on fact.

Such a research is doubtless shocking and could be snickered at by the sly; but evil be to him who thinks it! Any truth is good to know. First of all I talked with the ladies, because they possess both a clear eye and a delicate sense of tact; but it was soon plain to me that I should have begun this project some forty years earlier, and I could draw out only ironical or evasive answers.

A single friend took me in good faith, and I shall let her speak for herself: she is a sensitive unaffect- ed woman, virtuous without being smug, and for whom passion is by now no more than a memory.

“Monsieur,” she said to me, “in the days when we still served early suppers, I once served one to my husband and a friend. Verseuil (which was the latter’s name) was a good-looking fellow, far from dull, who often came to our house; but he had never said a word to me which might infer that he was my suitor: and if he flirted a little with me, it was in such a discreet way that only a fool could have misunderstood it. He seemed fated, that day, to keep me company, for my husband had a business appointment and soon left us. Our supper, although light enough, had however for its main dish a superb truffled fowl. The subdelegate of Périgueux had sent it to us. In those days that was truly a treat; and, knowing its origin, you can imagine how near perfection it came. The truffles above all were delicious, and you know how much I love them; still, I restrained myself; and I drank but one glass of wine; I had a flash of feminine intuition that the evening would not come to an end without some sort of disturbance. Soon after supper my husband left, and I was alone with Verseuil, whom he looked upon as quite without menace to our ménage. For a time the conversation flowed along without much excitement. Then it seemed to become more restricted and more absorbing. Verseuil showed himself successively as flattering, expansive, affectionate, caressing, and finally realizing that I did no more than lightly turn aside his prettiest phrases, he became so insistent that I could no longer hide from myself what he hoped would result. I awoke, then, as from a dream, and repulsed him all the more easily since I felt no real attraction to him. He persisted with an activity which could have become really offensive; I was hard put to it to bring him to his senses; and I admit to my shame that I succeed- ed in doing it only by pretending to him that there might still be some hope for him, another time. Finally he left me; I went to bed and slept like a babe. But the next morning was Judgment Day for me; I thought over my behavior the night before, and I found it infamous. I ought to have stopped Verseuil at his first protestations and not have lent myself to a conversation which from the beginning promised ill. My pride ought to have awakened sooner, and my eyes should have frowned severely on him; I should have rung for help, cried out, become angry, done, in other words, everything that I did not do. What can I say to you, Monsieur? I blame the whole thing on the truffles.”

Excerpt from The Physiology of Taste by Jean Anthelme Brillat-Savarin, translated and edited by M.F.K. Fisher, translation copyright © 1949 by the George Macy Companies, Inc., copyright renewed 1976 by The Heritage Press. Used by permission of Alfred A. Knopf, an imprint of the Knopf Doubleday Publishing Group, a division of Penguin Random House LLC. All rights reserved. Any third party use of this material, outside of this publication, is prohibited. Interested parties must apply directly to Penguin Random House LLC for permission.

Every culture has its own cuisine, and every cuisine its own secret history. This special issue of Journeys provides an in-depth look at food and culinary culture around the globe, including in-depth stories and favorite recipes.