The legacy of voracious collector Charles Lang Freer, a good friend of James McNeill Whistler, is marked by tension and irony 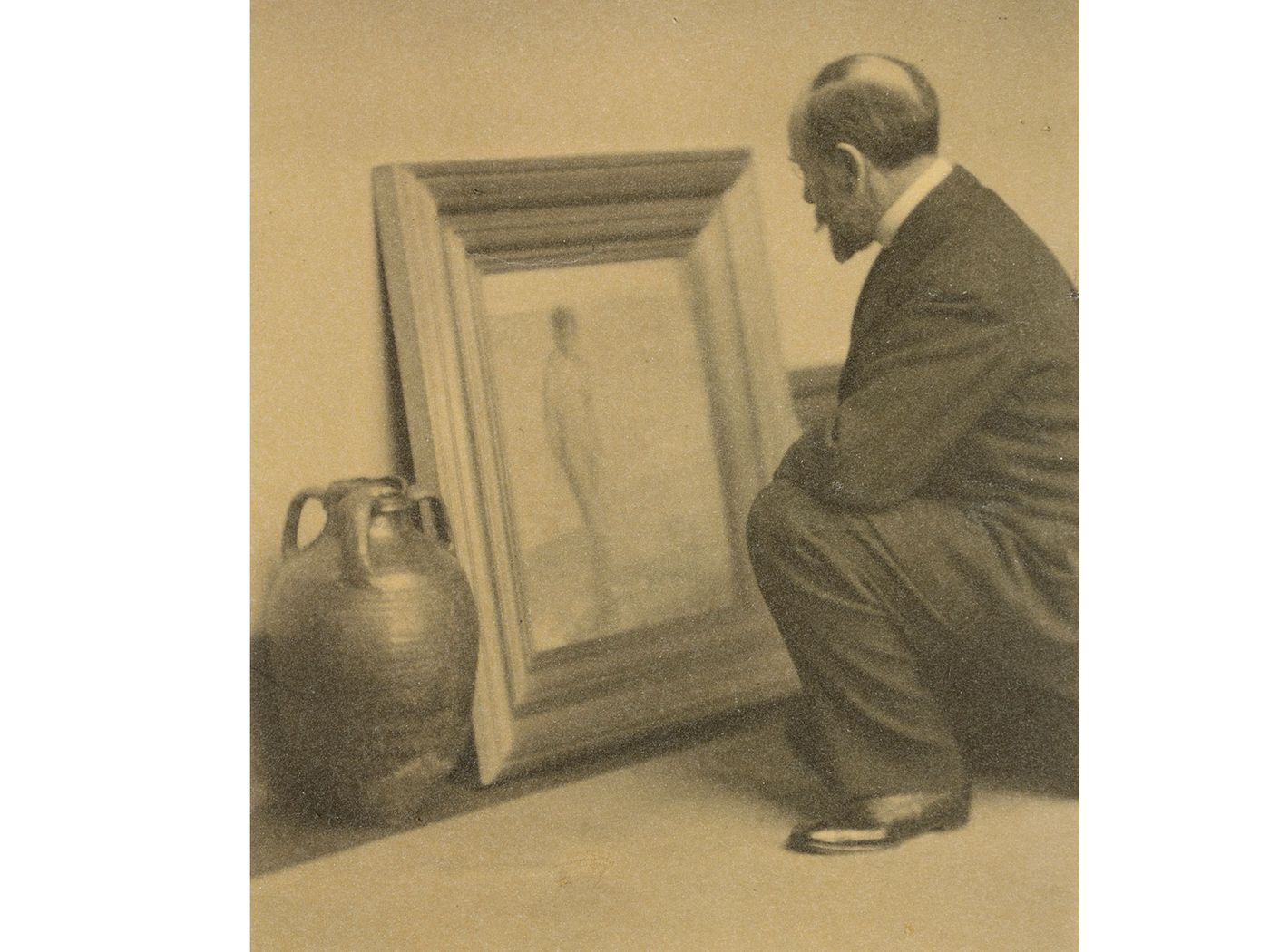 Living in an era when wealthy Gilded Age Americans assembled large collections of Western European art, Freer aimed to carve out a position by collecting something new and different. Freer Gallery of Art and Arthur M. Sackler Gallery Archives, gift of the estate, 1906

When industrialist and self-taught art collector Charles Lang Freer first offered more than 2,000 works of Asian and American art to the United States, the gift was rejected.

President Theodore Roosevelt intervened and facilitated that magnanimous bequest. Seventeen years later, in 1923, the collection was unveiled, showcased in an Italianate building funded by Freer as the Smithsonian’s first art museum. Freer did not live to see it; before his death in 1919, the collector had nearly doubled his holdings after a number of intense collecting sprees. Today the National Museum of Asian Art, comprising the Freer and Sackler galleries, houses more than 45,000 works.

The museum’s centennial next year offers a time to reflect on and celebrate its story—one that extends beyond a single name appearing on the façade of the building. Indeed, Roosevelt was just one individual among an international web of interrelated players who helped to create and bring Freer’s collection to the American people.

An exhibition on view at the National Museum of Asian Art, “Freer’s Global Network: Artists, Collectors and Dealers,” takes a peek behind the curtain to tell that remarkable story.

“For 100 years now, the museum has extensively studied Freer and his tremendous gift,” says the exhibition’s guest curator Katherine "Kerry" Roeder. “We wanted the public to know that the Freer Gallery of Art was not just the vision of one man. The show is about the many people Freer worked with to form his collection. We decided that the exhibition would be inclusive and not limited to Freer’s voice.”

Through 22 carefully chosen objects, visitors can see how Freer’s behind-the-scenes relationships shaped his taste, and they can learn about the figures who helped him decide what art to purchase. Reciprocally, the knowledge Freer gained through those interactions had a far-reaching impact on other artists and collectors, as well.

Living in an era when wealthy Gilded Age Americans such as J.P. Morgan and Isabella Stewart Gardner assembled large collections of Western European art, Freer aimed to carve out a position by collecting something new and different. He was particularly spurred by his friendship with the American artist James McNeill Whistler, whose work was infused with Asian influences. Freer’s first trip to Asia was born of the pair’s conversations and his admiration of Whistler. Over the years, Freer assembled the world’s largest collection of Whistler’s artworks.

Notably, Freer purchased Whistler’s exquisite Peacock Room, once a British shipping magnate’s dining room, and brought the entire assemblage from across the Atlantic. The immersive 19th-century masterwork, rebuilt in the museum in 1923, has long since captivated visitors with its intricate wood latticework and elaborate Asian-inspired walls painted in dazzling shades of green, blue and glistening gold leaf. Painted peacocks pepper the room, fancifully ornamenting the shutters and the ceiling, and the tour de force: two oversized, fighting peacocks symbolizing Whistler and his patron, who was none too pleased with what he viewed as the artist’s excessive embellishments.

Freer voraciously collected Asian and Egyptian art during his world tours, where he amassed knowledge by consulting with dealers, scholars and other experts. Headquartered in Japan, Yamanaka and Company served as a trusted advisor and dealer for more than 20 years. The company would ship Freer cases of Asian ceramics across the ocean, from which the collector would carefully pick those that pleased his sensibilities.

Armenian-born art dealer Dikran Kelekian appealed to Freer’s desire to collect unique objects by presenting the collector with pottery from the Syrian city of Raqqa. “Kelekian encouraged Freer to be the person who assembles a huge collection of these works that were little known by Americans, and Freer avidly bought dozens of them,” says Roeder. “They are quite beautiful, in part characterized by their richly glazed and abraded surfaces from being underground for so long.”

In turn, the art collector showed these shards to Mary Chase Perry Stratton, co-owner of Pewabic Pottery, a ceramics workshop in Detroit, the home base of Freer’s business enterprise. Stratton mimicked those surfaces in her own pottery, which Freer subsequently collected and displayed first in his home, then donated to the museum. Stratton is the first American woman artist to enter Freer’s collection.

This is not the only time that Freer shared the expertise he gained abroad with stateside artists, most of whom lacked the resources to travel to faraway locales. While Whistler never traveled to China or Japan, he may have benefited from Freer’s knowledge, a prominent example of when the collector, patron and connoisseur acted as an intermediary influence on those artists he supported.

The exhibition features a showstopping folding screen made by Thomas Wilmer Dewing and funded by Freer. Along with Whistler, Dewing was another one of Freer’s favored artists, and he also benefited from his patron’s collecting habits and expertise. Freer introduced Dewing to Whistler, and it was in Whistler’s Paris studio that Dewing saw a painted Japanese screen, which triggered his attraction to that format. During the two years that Dewing painted his ethereal screen, Freer acquired 12 Japanese folding screens for his personal collection.

Museum staff engaged in especially spirited conversations about the inclusion of Theodore Roosevelt’s portrait, commissioned by Freer in 1908 and painted by Gari Melchers. No doubt, Roosevelt looms large as the person who convinced the museum to accept Freer’s gift to the nation, but he is also a complex figure. On the one hand, he helped the museum gain crucial artifacts, but on the other hand he spearheaded expansionism into Cuba and beyond. Curators physically balanced Roosevelt’s 1908 portrait with a stately bodhisattva statue from the Tang dynasty (618-907 C.E.) that strikes a similar pose and stands taller than the painting, so the president does not dominate the exhibition space.

That connection of objects from different periods and places is in keeping with the spirit of Freer’s collecting agenda and aesthetic philosophy. Freer perceived diverse art forms and styles as part of a universal harmony that could be best highlighted by placing art in carefully conceived juxtapositions between diverse objects across cultures to promote, he wrote in his will, “high ideals of beauty.” Indeed, he saw no contradiction between arranging an Islamic glazed ceramic pot next to a 19th-century American painting. By creating such comparisons, Freer aimed to encourage conversations between works of art that spoke to each other to reveal, as he put it, “new beauties.”

Like Roosevelt, Freer is also a figure of tension and irony. He made his fortune in the railroad business, particularly through the manufacturing of train cars. Chinese immigrant labor built the railroad industry, and there was a strong reaction to the arrival of Chinese laborers, which contributed to the restrictive 1882 Chinese Exclusion Act. Freer’s fortune would probably not exist if it were not for the underpinnings of the railroad industry that was built with Chinese labor. “Against this backdrop, the American government accepted a collection grounded in art from Asia and the Middle East while during the same time period banning immigrants arriving from these nations,” says Roeder.

Because only so much art and text can physically be shown in a single room, curators designed an online tool, or StoryMap, to augment the history of the gallery and create a global presence for the exhibition.

“Our centennial year seemed like the perfect opportunity to provide a richer, more complex story about Freer as a collector and the development of our museum,” says Diana Greenwold, the museum’s curator of American art. “The exhibition will be on view throughout the centennial year and beyond. The accompanying digital StoryMap also offers new details and serves as a key online component to tell this story in more depth.”

May Freer’s generous and sui generis gift to the nation continue to delight and enlighten museum visitors for the next 100 years.