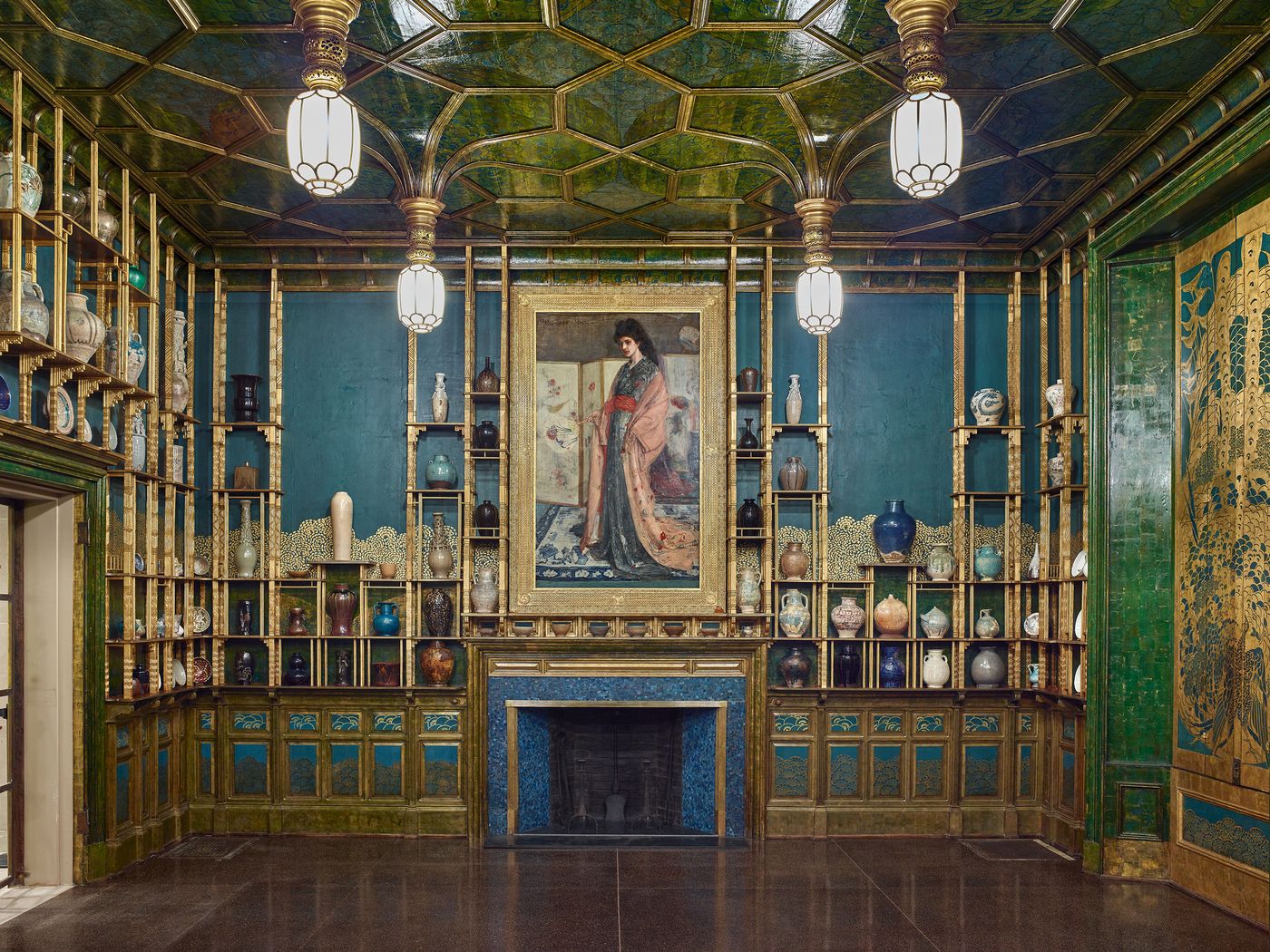 “This room is one of the masterworks of late 19th-century art and design, says the museum’s curator of American Art Diana Greenwold. Freer Gallery of Art

It’s painstaking enough to restore a single painting. It’s something altogether different to apply the meticulous process to an entire, elaborate room that’s more than a century old.

In the case of the unique Peacock Room, originally painted by James McNeill Whistler for a London patron’s dining room, largely against his wishes, its latest gleaming restoration has just been reopened in the Freer Gallery of the Smithsonian National Museum of Asian Art after months of work.

“This room is one of the masterworks of late 19th-century art and design, says the museum’s curator of American Art Diana Greenwold. “It's a stunning reminder of the genius of James McNeill Whistler as well as a way to tell important stories about artists, patrons, and the art market. We are also using this space to begin exploring more stories about orientalism, appropriation and empire.”

“We had to do it much more carefully in that space because of the historic painted walls, and the fact it’s basically an object,” said museum conservator Jenifer Bosworth. “It’s like working inside of an object.” It was the first major conservation in 30 years. With one tiny brush at a time, workers carefully cleaned and restored the ambitious work, which had conjured up its own storm of controversy in its day—the results of which also happen to be reflected on the walls.

The piece, whose full title is Harmony in Blue and Gold: The Peacock Room, has as its centerpiece an earlier Whistler painting, with its own color-specific title, Rose and Silver: the Princess from the Land of Porcelain.

As such, British shipping magnate Frederick Richards Leyland, intended his dining room to have an intricate lattice framework of engraved spindled walnut shelves to show off his own collection of Chinese blue and white porcelain. Original designer Thomas Jeckyll planned a room that set off the painting’s rose and silver, with a red border on the floor and rose-painted 16th-century leather wall hangings that dated back to the Tudor period of Henry VIII. Whistler got free rein of the room in 1877 as Jeckyll took ill and Leyland left London to attend to business in Liverpool.

Whistler originally got the okay to change the roses on the leather wall hangings to yellow, as he thought they clashed with the tones in his painting; and adding a wave pattern to the cornice and wainscoting. But the artist went further, getting more and more elaborate as he went, creating a dazzling room-sized composition in blue and green with white-over glazing and gold leaf.

“Well, you know, I just painted on,” Whistler wrote. “I went on―without design or sketch—it grew as I painted. And toward the end I reached such a point of perfection—putting in every touch with such freedom―that when I came round to the corner where I started, why, I had to paint part of it over again, as the difference would have been too marked. And the harmony in blue and gold developing, you know, I forgot everything in my joy in it!”

“He kind of went crazy and painted all this stuff Leyland didn’t know about,” Bosworth says. “Leyland came back and was very unhappy, it was not at all what he anticipated. And they had a big falling out.”

Leyland called Whistler an “artistic Barnum,” according to Susan Hobbs, a former curator of American art at the Freer Gallery. They argued about the price as well as the wildly different direction of the room—and the fact that Whistler had been welcoming people into the room to watch his work progress as the summer wore on. The original designer, Jeckyll also had a severely adverse reaction, reportedly collapsing after seeing it and dying in an asylum three years later.

The artist-patron relationship between Leyland and Whistler was forever severed. But when the artist had an opportunity to return to the house again when the shipbuilder was away, he finished the room with an elaborate painting of two fighting peacocks, one of them weighed down with money. Its title: Art and Money: or, The Story of the Room.

He’d painted a more severe reaction to the incident in an 1879 painting showing his former patron as a demonic, piano-playing peacock, titled The Gold Scab: Eruption in Frilthy Lucre (the Creditor). By then, Whistler was deep in debt, with Leyland his main creditor.

Leyland for his part grew to accept the room, keeping it intact until he sold the house. An art dealer put it on display and tried to sell it to Charles Lang Freer, a Whistler enthusiast who had already purchased the Princess from the Land of Porcelain.

Freer said at the time he had no use for the entire room—“the architectural design of the shelving and ceiling I have never liked,” he wrote in a cable to the dealer. But he later reconsidered, saying in a letter to Whistler’s sister-in-law and executrix of Whistler’s estate that to be reunited with the original painting for the D.C. museum he was planning, perhaps “the peacocks upon the shutters and in the panels should be left to reign in glory and to feel their pride as their creator intended.”

Because of the construction of the room—on a wood lattice work that made it easier to dismantle and ship—Freer rebuilt the Peacock Room first at his Detroit mansion after his 1906 purchase, carefully displaying his own rich collection of porcelains from Syria, Iran, Korea, China, Japan and even notable works from the local Pewabic Pottery in Detroit, the only piece of American decorative art Freer included in his bequest to the Smithsonian. Combining ancient works with Whistler’s paintings helped prove Freer’s believe that “all works of art go together, whatever their period.”

The newly-reopened room as an exhibition titled “The Peacock Room Comes to America,” 99 years after the Freer Gallery’s opening appears as close as possible to how the museum’s founder had originally displayed it, according to close scrutiny of 1908 photographs of Freer’s home cross-referenced with Freer’s holdings.

“A lot of those pieces were in our collection,” says conservator Ellen Chase. “So it was possible for our previous American curator Lee Glazer to go through with the photographs and actually identify with a number of other staff members the pieces in the photographs so we could correlate images from1908 with the current collection and put them on the shelves.”

There are about 250 pieces in all, which mostly had been in Freer’s original display, Chase says. “There are certain ones where you couldn’t tell, because we had multiple pieces that were somewhat similar but I’d have to say a majority of them are those that have been identified from the photographs.”

That was especially the case for the shutters, which in recent years have been opened one day a month to let the sun shine in, to give a glimpse of how the room looked in the daytime. The opening of the shutters grew to a big event. “People would get their phones out and get a video of you opening the windows,” Chase says. But it also meant wear and tear on the shutters, painted on the interior with perhaps the most fanciful peacocks.

Now given some needed restoration, the Peacock Room at 145 years old, fairly preens.

“It’s beyond an historic room; it’s beyond a painting,” says Chase. “The room itself is the artwork.”

And underlying the beauty is quite a compelling story. “It certainly would be out in social media now as this big splashy story of artist and patron,” Bosworth says.

But it also shows a moment of inspiration for Whistler. “It’s just like he gave himself to this room and he was thinking that Leyland’s going to love this. And then when he was upset for various reasons—and I understand Leyland’s reaction to a certain degree, too,” Bosworth says. “He was just so angry and when you see the results of his anger across the whole wall. So in the room now, you’ve got this in-depth case of creating this experience and then you see his emotional reaction at the end. It’s quite a nice contradiction.”

“The Peacock Room Comes to America” is open at the Smithsonian’s Freer Gallery of Art in Washington, D.C. The shutters of the Peacock Room are opened on the third Thursday of each month.