The Zoo and Seven Smithsonian Museums Are Reopening in May

Finally, you can meet the baby panda in person; tips for visiting and acquiring free tickets 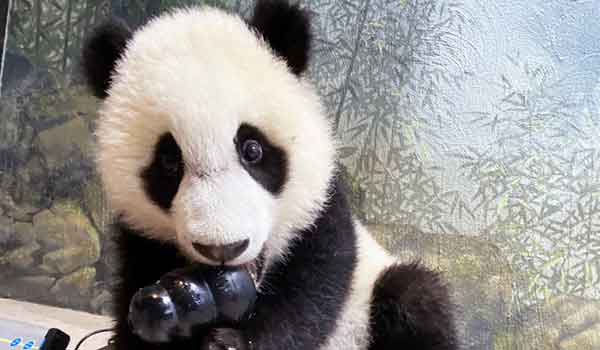 Seven Smithsonian museums and the National Zoo will reopen in May, following months of closure during the Covid-19 pandemic. It also means the public will have its first chance to see the new panda cub, Xio Qi Ji, born with some fanfare at the Zoo last August.

Free timed entry passes can be reserved today for the first location to open on May 5, the National Air and Space Museum’s Steven F. Udvar-Hazy Center in Chantilly, Virginia.

The Smithsonian museums have essentially been closed for 13 months—minus a period of several weeks of brief phased reopening at a handful of museums and the Zoo between September and November last year. Attendance, which had totaled 22.1 million at the various Smithsonian museums in 2019, fell to 3.3 million when the museums were closed for most of 2020.

“There’s so much pent-up demand for people to have those outlets, to come back to the Mall, come back to their Smithsonian. where people have a great sense of allegiance and devotion,” says Anthea Hartig, the director of the National Museum of American History. Things won’t be completely back to normal when the doors reopen. Safety measures due to the Covid-19 pandemic will be in place. Weekly schedules will be reduced, though each museum will have a different closing day to ensure something will be open during the week. Only the Zoo and the Udvar-Hazy Center will resume a daily schedule.

For every location, visitors will need to secure separate timed-entry passes in advance and mask-wearing will be required for everyone age 2 and older. Safe social distancing will be encouraged and one-way paths may be implemented. Stores and cafes in most cases will be closed, except for at the Zoo.

Here’s the outlook at the reopened museums:

The first to reopen last July as well, the vast center in Chantilly, Virginia, near Dulles Airport, will have some new things to view. To mark the 60th anniversary, also on May 5, of Alan Shepard’s first manned space ride, his Mercury Freedom 7 capsule will be back at the museum following a long-term loan and on display for the first time at the Center.

As if to show the advances in space travel in just eight years, it will be displayed right next to the Apollo 11 command module Columbia that brought the first men to the moon in 1969. Most of the 60th-anniversary commemorations will take place online, though, because of continued in-person programming constraints.

Also new on display there will be a donated Blue Angels F-18, received just before the second Covid shutdown at the center last fall. The Center will continue to use its “virtual volunteers” with docents appearing on large screens throughout the museum to answer questions and assist visitors. Open daily from 10 a.m. to 5:30 p.m. Drivers can pay for parking as they depart.

National Museum of African American History and Culture, reopening May 14

One of the most popular museums on the Mall since it opened in 2016, attracting 2 million visitors in 2019, the museum will reopen its permanent exhibitions and continue work on creating a 4,300-square-foot exhibition on the Reconstruction Era, with 175 objects, 200 images and 15 audio, video and interactive programs.

The show will open on September 24, timed to mark the fifth anniversary of the museum, and will be accompanied by a companion book and catalog. While there are no in-person events scheduled with the reopening, the museum’s array of online events, virtual exhibitions and digital resources that it created during the pandemic will continue. Open Wednesday to Sunday, 11:30 a.m. to 7 p.m.

There’s still a chance to see the large, multidisciplinary “Alexander von Humboldt and the United States: Art, Nature and Culture,” the exhibition that celebrated the 19th-century naturalist and explorer and includes large landscapes by Frederic Church and a full-size mastodon skeleton returned to the U.S. for the first time since 1847. The exhibition, originally scheduled to close last August, was already extended to January when museums closed again in November; now it’s been extended to July 11.

Director Stephanie Stebich says she was “deeply grateful to the collectors, museums and foundations for their continued generosity during these unprecedented times by agreeing to extend loans, in some cases for a second time, as well as the extraordinary effort of our staff to develop and install these thought-provoking projects.”

Sadly, the museum was unable to extend a newer exhibition, “¡Printing the Revolution! The Rise and Impact of Chicano Graphics, 1965 to Now,” which was only on display for three days before the museum had to close again in November. The show’s 119 vivid examples of Latinx art, reflecting the civil rights era up to the murder of George Floyd, is still slated to close August 8, so it can travel to the Amon Carter Museum of American Art in Fort Worth. Open Wednesday to Sunday, 11:30 a.m. to 7 p.m.

“Forces of Nature: Renwick Invitational 2020,” open for about a month last fall, aimed to show how nature and art have power to reframe perspectives in a chaotic world. But the works by Lauren Fensterstock, Timothy Horn, Debora Moore and Rowland Ricketts couldn’t be shown after November because of the coronavirus. Now the extensive biennial installment at the museum dedicated to contemporary craft and decorative arts, originally scheduled to close June 27, will be extended to Aug. 15. Open Wednesday to Sunday, 10 a.m. to 5:30 p.m.

“Every Eye Is Upon Me: First Ladies of the United States,” only open 10 days before museums closed in November, is the first major exhibition to explore the historical significance of this White House spouse through portraiture, spanning 250 years from Martha Washington to Melania Trump. It continues through May 23.

One of two history museums on the Mall that opened for seven weeks last summer, director Anthea Hartig says they hope to glean some lessons from their experience, particularly with the use of timed-entry passes for the first time. “People were so eager and happy to be inside that they were very compliant with our restrictions for mask wearing,” she says.

New information about the nature of Covid transmission on surfaces means more interactive or hands-on exhibits may be available.

Some exhibitions that never got to be opened last summer, such as “¡Pleibol! In the Barrios and the Big Leagues,” a look at the Latino impact on baseball, will instead open July 1. “Creating Icons: How We Remember Woman Suffrage” was only open for a week before the museum had to close last March. It has now been extended. Another exhibition celebrating last year’s Year of the Woman, “Girlhood (It’s Complicated)” has been extended to January 2023.

New artifacts to see include Constance Wu’s gown from the 2018 film Crazy Rich Asians, and an artwork by TV painter Bob Ross. Open Friday to Tuesday, 11 a.m. to 4 p.m.

National Museum of the American Indian, reopening May 21

The newest addition to the National Museum of the American Indian has been available for viewing since it was dedicated in November, because it is located outdoors. The National Native American Veterans Memorial was designed by Harvey Pratt, of the Cheyenne and Arapaho tribes of Oklahoma, who has also had a long career in forensic art and was active in a number of high-profile cases.

Of the other special exhibitions at the museum, “Nation to Nation: Treaties Between the United States” and “American Indian Nations and Americans” will both continue through the year. But another exhibition, “Our Universes: Traditional Knowledge Shapes Our World,” has closed because social distancing there proved difficult. One long-running exhibition, “The Great Inka Road: Engineering an Empire” has been extended through June 27. Open Wednesday to Sunday, 11 a.m. to 4 p.m.

The panda! The panda! There was so much excitement when an unexpected panda cub Xiao Qi Ji was born at the Zoo last November, there may be even more as he will be available to be seen by the public for the first time. But not so fast: In addition to timed-entry passes at the Zoo, there will be a requirement for a second timed-entry pass for the Asia Trail and Giant Pandas area that visitors will need to acquire upon arrival. Passes will be released throughout the day, though Zoo officials caution that the little male cub, Xiao Qi Ji is still young and sleeps quite a lot during the day, so it still might be best to view him via the panda cams. However, the 163-acre Zoo is home to more than 2,700 other animals representing more than 390 species, including Asian elephants, Sumatran tigers and orangutans.

Open daily, 8 a.m. to 4 p.m. Restaurants and food trucks at the Zoo will be open. Visitors driving to the Zoo, who wish to park must purchase parking in advance as well.

Of the other museums not included in the May openings, the Hirshhorn’s indoor galleries are closed but its outdoor sculpture garden remains open daily 10 a.m. to 4:30 p.m. with limited capacity, but passes are not required. Yoko Ono’s Wish Tree for Washington DC is open for online participation this year through April 30.

The Air and Space Museum on the National Mall remains temporarily closed for construction; with new galleries set to open late next year. It is one of the most popular Smithsonian museums. Its 3.2 million visitors in 2019 is second only to the National Museum of Natural History’s 4.2 million. But the latter is not among the museums opening in May either.

Also closed for now are the Freer Gallery of Art and the adjoining Arthur M. Sackler Gallery, which continue to offer online programs and an array of museum resources.

The Anacostia Community Museum remains temporarily closed, but has created a couple of outdoor exhibitions. An eight-stop walking tour titled “Men of Change: Taking It to the Streets” is on display through May 31 near the Deanwood Community Center in northeast Washington. Part of the upcoming exhibition “Food for the People: Eating and Activism in Greater Washington” is on view outside the museum through Sept. 17.

Visitors for all reopened Smithsonian locations will need a free timed-entry pass that can be obtained online or by phone at 800-514-3849, ext. 1. One person can reserve up to six passes per day for a specific location. Each person must have a pass, regardless of age. Timed-entry passes can be printed at home or be shown on a mobile device. Groups larger than six are prohibited; one adult chaperone is required to accompany up to five children under the age of 18. The phased reopening process leaves some museums temporarily closed; reopening dates were not made available.