A New Look for the National Air and Space Museum

The Incredible Technology That Made Humanity’s Moon Dreams a Reality

A new, completely reimagined exhibition goes beyond the Cold War narrative to explore the full story of lunar landings 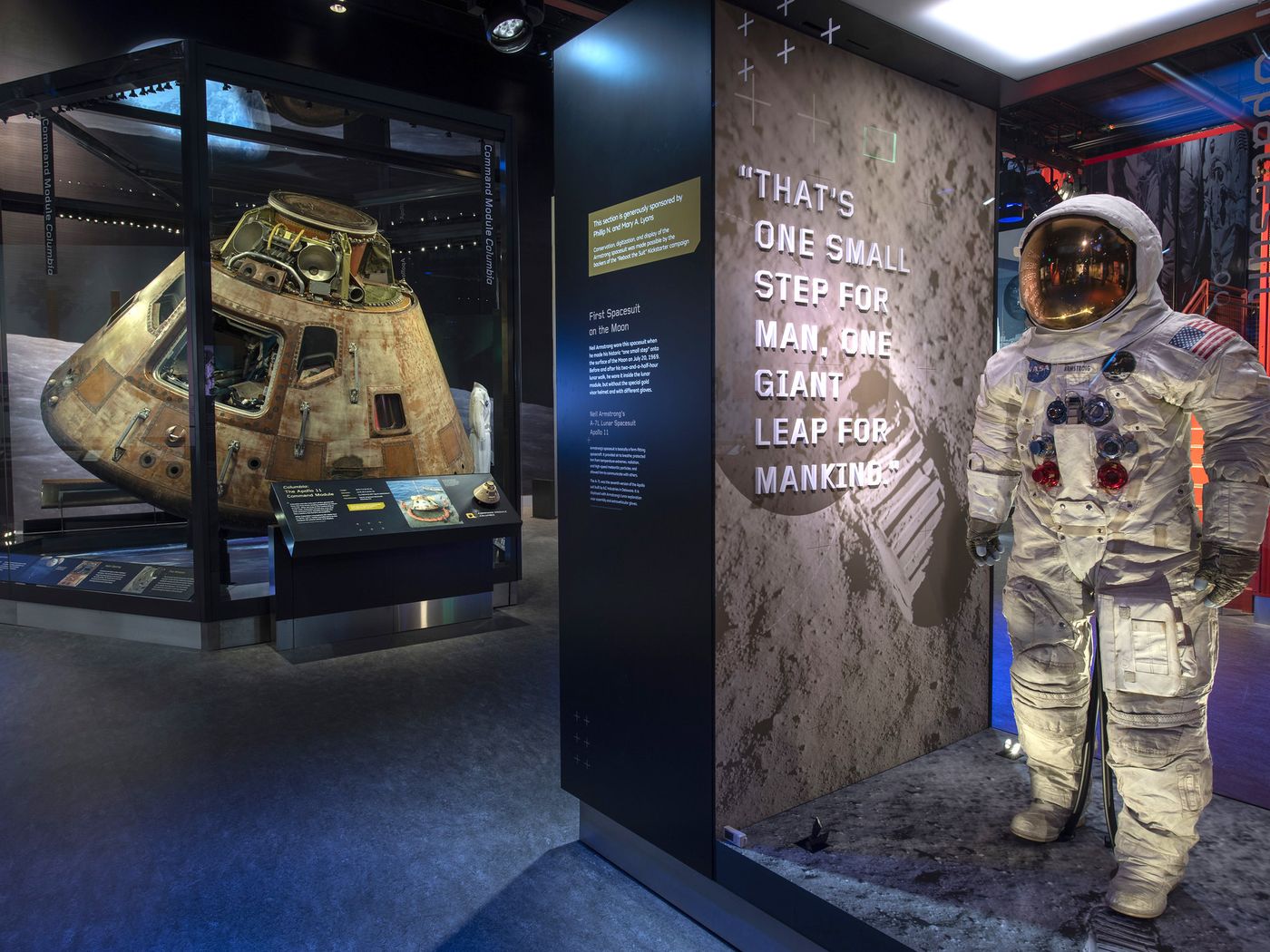 The Apollo 11 Command Module Columbia, the only part of the spacecraft from the first moon-landing expedition to return to Earth, is on view with the space suit that Neil Armstrong wore when he walked on the moon in July 1969. National Air and Space Museum/Jim Preston

At the center of the newly revamped “Destination Moon” exhibition at the Smithsonian’s National Air and Space Museum, visitors can stand directly beneath the business end of an F-1 rocket engine, the massive power plant for the Saturn V launch vehicle. Angled within the ceiling are several mirrors that create the illusion that the artifact—a single engine—is at the center of an array of five. These massive engines were positioned at the bottom of the first stage of the Saturn V rockets, which carried astronauts to the moon six times between 1969 and 1972.

But visitors climbing the gallery’s red stairs—made conspicuously to look like NASA’s gantry—to the new mezzanine will find artifacts that are less imposing but equally fascinating. These objects are powerful reminders of how the lunar landing was not merely the triumph of a handful of exceptionally capable and courageous Apollo astronauts, but of tens of thousands of people who contributed in ways that those who have never blasted beyond Earth’s atmosphere will find more relatable.

Take for example, the evolution of the Apollo spacesuit, masterfully explained in a display featuring a number of fast-changing design iterations, including a training suit that Frank Borman wore in 1967, an early experimental suit and a prototype of a fifth-generation pressure suit. Also on display is one of the sewing machines NASA seamstresses used to build the suits. In a video, Joanne Thompson recalls the exacting work of sewing spacesuit gloves to specifications of one thirty-second of an inch, knowing that astronauts’ lives would depend on the precision of her needlework. (A cultural artifact of the era, too, is the precarious beehive hairdo Thompson sports in the photograph for her 1960s employee badge as a NASA contractor from ILC Industries, the small company that in 1965 won the contract to create and manufacture spacesuits.)

The notion that a rocket engine and a sewing machine were both essential tools of mankind’s “one giant leap” is an example of the sort of holistic approach that distinguishes “Destination Moon” from the exhibition's prior iteration—designed in 1976 when the space race was still a recent memory for many of the museum’s visitors.

“It’s no longer an exclusively Cold War gallery,” says Cathleen Lewis, the museum’s curator of spacesuits and international space programs. More than that, the gallery now recognizes that human lunar curiosity predates the very idea of nations. “Even before we had written language, we knew that the moon had an impact on crops, on harvesting, on being able to hunt,” Lewis says.

In other words, the revised “Destination Moon” updates the story of the prior version by several decades—and backdates it by several millennia.

Visitors can also see robotic spacecraft, launched by the Department of Defense and by NASA, as well as by the Soviet Union, Japan, China and India that followed the crewed lunar landings of the Apollo program.

Though Cernan’s lunar overshoes are not, as Lewis says, the punctuation on the exhibition, they are present, the last human-worn garments to touch the lunar surface. (Neil Armstrong and Buzz Aldrin left their overshoes behind on the surface.) Visitors are also invited to touch a reproduction of Cernan’s boot print.

Armstrong’s Apollo 11 moon suit is back on view, the beneficiary of restoration and a digitization effort, circa 2015 to 2019, funded in part by a Kickstarter campaign that raised just under $720,000 in individual donations. Alan Shepard’s spacesuit is here, too, next to the Freedom 7 capsule that he piloted in May 1961 to become the first American in space.

Not everything on view has been engineered to withstand the hazards of space. One of Lewis’ favorite artifacts is an Estonian-built, battery-powered toy reproduction of the Soviet Lunokhod 1 lunar rover that landed on the moon in November 1970. It’s another reminder, she says, that moon mania was not solely an American preoccupation.

Exhibition copy attesting to the hold the moon has long held over our imaginations references Jules Verne’s prophetic 1865 novel From the Earth to the Moon, pointing out that the Frenchman’s tale described three men being launched into an orbit of the moon via a giant canon situated in Florida before splashing down in the Pacific—predicting the course Apollo 8 would take more than a century later with remarkable accuracy.

The Qualification Test Unit—the earthbound cousin of the Lunar Roving Vehicle used in Apollo 15, 16 and 17—has an updated story about the mission-saving versatility of found objects. Apollo 17, the final crewed lunar expedition until the Artemis program returns the United States there in 2025, was jeopardized when a hammer in the pocket of Cernan’s spacesuit snagged a fender of the rover as he and lunar module pilot Harrison Hagan "Jack" Schmitt were completing their first extravehicular activity, or EVA. The fender extension popped off of the rover, exposing the two astronauts to a continuous spray of highly abrasive lunar dust—or, as the astronauts colorfully phrased it, “rooster tails.”

This rendered the moon buggy effectively useless, as the dense coating of dust had the potential to absorb heat, thereby causing the astronauts’ instruments—not to mention their life-preserving suits—to fail. The dust also defeated Cernan’s attempt to reattach the fender extension with duct tape.

Charged with building a replacement fender out of materials the astronauts had on board, a team back at Houston puzzled out how to fabricate a new fender from four lunar maps and two clamps from the optical alignment telescope—and, of course, from duct tape. When Cernan and Schmitt woke the next “morning,” they followed instructions from Mission Control to implement the fix. Their remaining two EVAs came off as planned.

The new artifact Lewis regards as most significant is the F-1 engine fragment from the first stage of the Saturn V that carried Apollo 11. It was recovered from the depths of the Atlantic Ocean in 2013 during an expedition funded by Amazon’s then-CEO Jeff Bezos, more than 40 years after the spacecraft’s two-and-a-half-minute burn. “We were looking for a way to convey the incredible power of the Saturn V,” Lewis says. “The damage that’s done, just from the portions that land back in the ocean, that didn’t even leave the Earth’s atmosphere.”

When Americans return to the moon, they’ll be flying via the Space Launch System, NASA’s long-in-development heavy-lift launch vehicle, which generates 8.8 million pounds of maximum thrust, 15 percent more than the Saturn V did half a century ago. The new “Destination Moon” captures those giant leaps, with a renewed focus on the small steps along the way.

"Destination Moon" is on view at the Smithsonian's National Air and Space Museum.