Alan B. Shepard’s historic Mercury spacesuit undergoes hours of conservation work for its debut when the National Air and Space Museum opens this fall 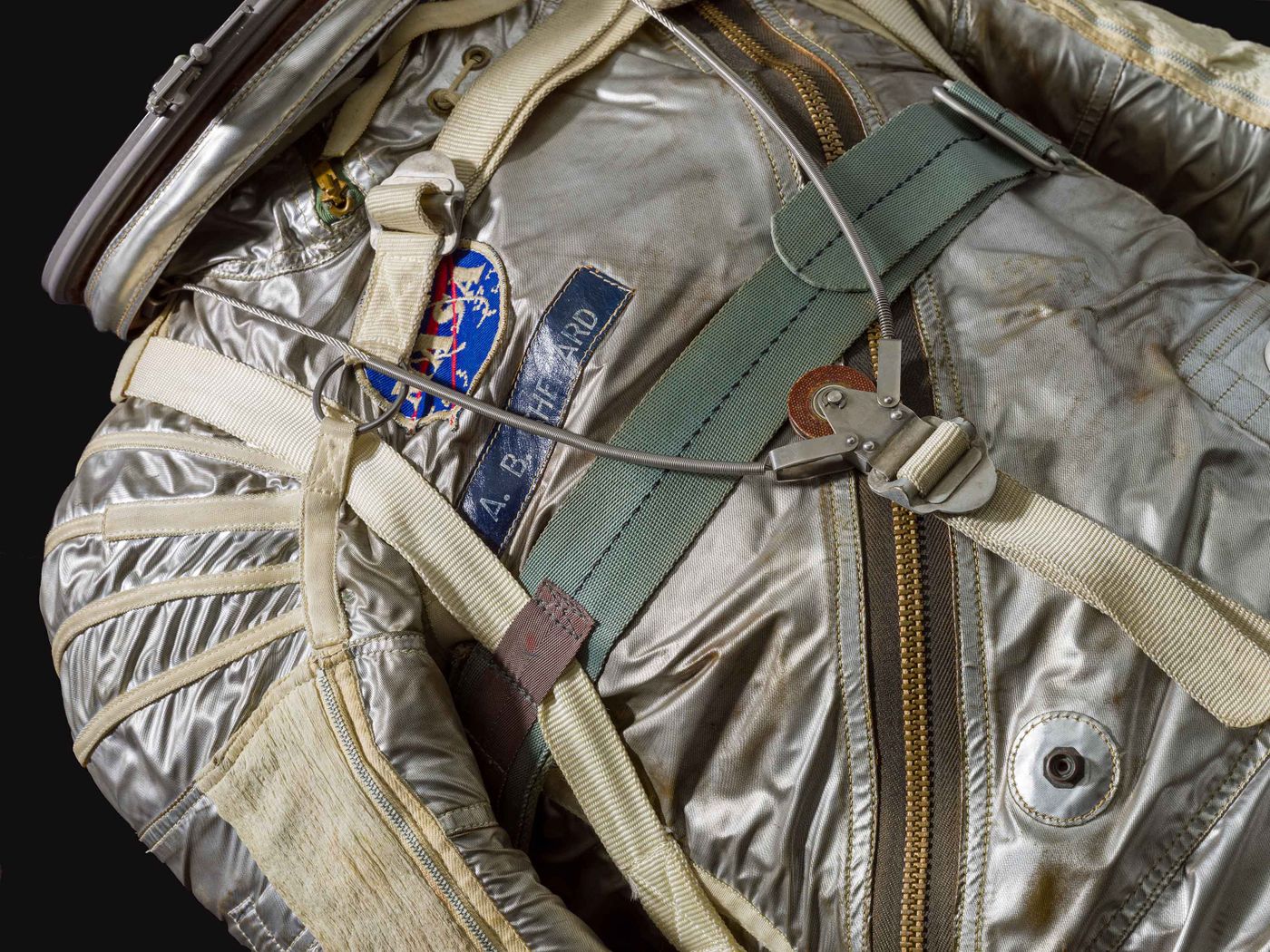 Materials and manufacturing details of the specially made suit of America's first space traveler were extensively analyzed before being prepared for display on a customized mannequin. NASM

Three hours after entering his space capsule, delays in the launch had pushed astronaut Alan B. Shepard Jr to the moment that surely every human has known at some point—the need to pee with no powder room in sight.

“The whole world is watching. JFK is watching. It’s the biggest moment of his career, and all he can think about is having to go to the bathroom.” That’s how Neal Thompson, Shepard’s biographer, describes the moment as the 37-year-old Mercury astronaut prepared to become the first American in space for his suborbital flight on May 5, 1961.

The entire journey was supposed to last a mere 15 minutes, so no plan had been implemented to address the possibility that the man might need a bathroom break. Shepard had eaten a hearty breakfast with coffee and juice, and taken his place in the cabin of Freedom 7 with the expectation that he’d take off and return to Earth long before he felt the call of nature. However, as delays dragged on, Shepard asked for permission to leave the ship and relieve himself. The answer he received was an emphatic “no.”

Donning the 20-pound suit devoured 15 minutes. Taking it off and putting it on again could add more than a half-hour. NASA wanted to put this man in space as soon as possible, not to explain a new delay because of a full bladder. Therefore, Shepard was told to unhook the electrical connections to his space suit and pee right where he was. Of course, this procedure had never been done before, and Shepard had some trepidation about electrocution when he reconnected his suit. By the time liftoff occurred about an hour later, the astronaut felt dry.

NASA expected to acquire new knowledge from the first spaceflight, but this experience was unexpected. “What they learned was that no matter what your plans are for launch, there are always going to be delays,” says Cathleen Lewis, who is the curator of spacesuits and international space programs at the Smithsonian’s National Air and Space Museum. “They didn’t think Shepard was going to be in that thing with his legs up in the air for as long as he was, and they had to accommodate that eventuality.” NASA began to incorporate bathroom engineering later in its flights, starting during Project Mercury with a catheter system created for both long-distance truck drivers and hospital patients.

Today, the specially made suit of America’s first space traveler along with Shepard’s Freedom 7 capsule are an important piece of history and will be among the artifacts on view in the “Destination Moon” gallery when the museum reopens in the fall. The uniform was a pressure suit to protect Mercury astronauts during launch and reentry into Earth’s atmosphere. “It was an experiment” says Lewis, “to see if that would work and withstand the great variations in temperatures. It also had reflective properties that could have made it important for recovery, and last but not least, it had that property of distinguishing the Mercury astronauts from other pilots.”

Among the seven Mercury astronauts, the opportunity to be the first American in space was a coveted prize. The chosen astronaut qualified “based on personality and who was best equipped,” says Lewis.

The Mercury astronauts were Type-A individuals, she says, “who were very competitive and in a field that was known for head-to-head competition, they wanted to withstand the rigors and face the challenges head on.” As the first space-faring American, Shepard is seen “as the symbol of the beginning.” Three weeks after Shepard’s May flight, JFK announced the U.S. would successfully achieve a safe landing on the moon by the end of the decade.

The “Destination Moon” exhibition details “the early years of humankind’s fascination with the moon through technology, astronomy and popular culture,” says Lewis. Also on view is the Apollo 11 command module Columbia, and the spacesuit Neil Armstrong wore when he became the first human to walk on the lunar surface in July 1969.

The show features a one-third scale model of Vostok, which made Soviet cosmonaut Yuri Gagarin the first human in space on April 12, 1961—just 23 days ahead of Shepard’s journey.  And Lewis, who was also instrumental in the 2015 project to conserve Armstrong’s Apollo 11 space suit, crowdfunded through the popular Kickstarter platform, is especially pleased by the second-floor mezzanine display that demonstrates the process of designing a space suit.

The museum’s staff has allotted significant time and effort to reviving the Shepard’s suit. Lisa Young is one of the conservators who was tasked with preparing the artifact for display in a process that goes well beyond simple restoration. “Most of us have a background in chemistry, art, history, archaeology,” she says. “We move on to study conservation at the graduate level.”

On the job in museums, conservators study “what objects are made of and how they interact with the environment around them, whether on display or in storage.” They work to return each artifact to its condition after use with an approach and a plan to maintain the “stories of use on the suits,” says Young. For instance, they would not dream of removing moondust from an artifact like Armstrong’s Apollo 11 spacesuit to make it cleaner.

For that reason, the museum team did not attempt to make Shepard’s suit seem like it was freshly made; instead, they sought to return it to its condition after Shepard’s historic flight.

As the team examined Shepard’s garment, they found that “the condition was pretty good,” says conservator Maggie Bearden, who estimates that she and other specialists spent more than 300 hours working on the historical artifact. After an extensive investigation, the team found no damage in the suit connected to urination. Most of the urine was likely soaked up by Shepard's underwear. Their research led them to the discovery that the suit had been coated with material used primarily in the uniforms of firefighters and that it came from 3M.

Over time space suits change, growing rigid and inflexible. To put them on display, conservators build mannequins to support the material and accommodate any changes that develop as the artifact ages. The process is “one of the more challenging treatments we have,” says Young.

Because Shepard made a 15-minute flight without even entering Earth orbit, and Armstrong made the first flight to the moon’s surface, Armstrong’s suit “has a lot more layers, a lot more engineering in it, and a lot more complications when it comes to fitting a mannequin inside,” says Young. The team found that if they reattached the helmet and gloves, the sealed environment threatened to damage the suit. So conservators designed a mannequin that could wear the helmet and gloves without having them attached.

The United States is planning a human return to the moon, and in anticipation of that journey, NASA is studying images from its own Lunar Reconnaissance Orbiter. Furthermore, the United States has learned from robotic exploration by other nations, including China, Israel and India. Humans have explored a very small portion of the lunar surface, Lewis says. Astronauts of the Apollo program did not stray far from their landing sites even when using the automobile-like Lunar Rover because they needed to remain within walking distance of their spacecraft in case something went wrong.

Scientists did not stop learning from the Apollo missions when the last one, Apollo 17, returned from the moon in December 1972. Lewis points out that bits of the lunar surface embedded in the boot coverings of the final two Apollo moon walkers, Astronauts Eugene Cernan and Harrison H. Schmitt, has helped scientists to plan for the next lunar landings because they know what materials can best survive in a lunar environment.

Alan Shepard who took that first step in the long march to the moon was later grounded by Menière’s Disease, an ailment of the inner ear that affects balance, during NASA’s second space program—Gemini. Nevertheless, he stuck by the agency as head of the Astronaut Office. Eventually, surgery aided his recovery and made it possible for him to become the only Mercury astronaut to leave his footprints in the lunar dust. In 1971, during Apollo 14’s mission, about a decade after his first short flight, Shepard again made history by becoming the first to strike a golf ball in the moon’s low gravity: He made a 200-yard shot using only one hand because he could not grasp the six-iron with both hands while wearing his bulky space suit.

This light-hearted gesture, coming in the shadow of the calamitous Apollo 13, had been approved by NASA as long as the mission appeared to be a success, so Shepard waited until late in his lunar visit to swing at the ball.

Thompson recalls the younger Shepard of Project Mercury as brash, irreverent, and at times imperious, defying the early stereotype of the astronaut as flawless hero. The biographer sees the youthful Shepard as “Don Draper in a space suit. He sort of represented that Mad Men era of cool and martinis, cigars, cars, and women.” While he does not admire some of Shepard’s behavior—arrogance, competitiveness and marital infidelity—Thompson does respect the determination that enabled Shepard to be the first in space, and at 47, to be the oldest astronaut to walk on the moon.

The Alan B. Shepard Jr spacesuit will go on view in the new exhibition “Destination Moon,” which opens to the public in the fall of 2022 along with “America by Air,” “The Wright Brothers & the Invention of the Aerial Age,” “Nation of Speed,” “Thomas W. Haas We All Fly,” “One World Connected,” “Kenneth C. Griffin Exploring the Planets Gallery,” “Early Flight,” and the museum store and Albert Einstein Planetarium.