This isn't a headline that inspires confidence: 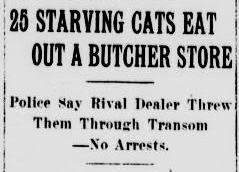 It's from 1914’s New York Sun—the Bowery Boys dug it up. Actually, the whole story is worth reading:

"Policeman James Kenny, trudging along James Street at 10 o'clock last night, heard horrendous sounds coming from the market of Brighton Beef Company at No. 72.  A hundred drunken burglars couldn't have made more noise.

Kenny, remembering that a bomb went off in front of this same market six months ago and blew the store front to pieces, blew his whistle and thumped his night stick for assistance.   Seven other patrolmen came running.

They stole up to the door with pistols pointed.  They lunged together and burst in.  Twenty-five cats fled at their approach.  The cats were of all sizes and colors.  They had been hungry, but were no longer.  They had eaten every scrap of meat in the market -- chicken and beef and everything else, and were fighting over the bones.

The eight policemen pocketed their pistols but swung their clubs.  They also said 'Scat!' and the cats ran into the street and scurried through the East Side with great news for their tribe.  There were no arrests.

The police suspected that some rival butcher had collected the cats,  starved them and thrown them through the transom of the Brighton Beef Company's store." 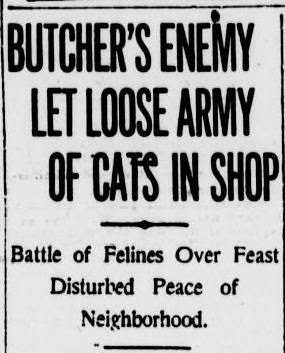 Other newspapers covered the same story, including the Evening World, which described the horrific scene this way:

The first peripatetic pussy that was pushed through the fanlight was pounced upon by the faithful feline guards of the pork chops.  They grabbed him and sought to shove him into the sausage chopper.  But other felines came through the fanlight. It began to rain cats.  The guardians of the garbage cans made short shrift of the tame tabbies of the butcher shop."

Not all butchers are fearsome of cats, however. In the Lincoln County Leader on May 16th, 1913, there is a story about a butcher shop that caters to kitties.

And on February 22, 1885, the Springfield Globe-Republic published a piece entitled “Broadway’s Pet Cats: Animals in the Shops Which are Polite to Customers.”

“No shop is complete nowadays without a cat,” said a Broadway policeman. “My beat along the upper part of Broadway takes me right through the shopping district, and when I go home at night I have to walk down Sixth avenue, so that I have a pretty fair opportunity to watch the cats.”

Today, the health inspectors would probably frown upon cats living in a butcher shops or restaurants. But perhaps the butchers have already learned their lesson from the peripatetic pussies.