Whenever LeeAnn Applewhite goes out to dinner for seafood, she makes sure to order extra for take-out, but the fish doesn't go in the fridge. Instead, she takes it to her lab, extracts a microscopic sample of DNA, and samples a few key genes to reveal which species the sample belongs to.

In an age where roughly a third of all seafood served in the U.S. is mislabeled, she finds that the DNA and menu often disagree. "I've come across some real doozies," she says. "The lobster bisque is actually shrimp, or—this one is the most common—the grouper is really vietnamese catfish."

Applewhite is particularly qualified to make these distinctions. She's the founder and CEO of the Florida-based Applied Food Technologies (AFT), a company that provides DNA identification of seafood for restaurants, grocery chains, distributors, government agencies and importers.

Having the technology to detect seafood fraud is a modern development, but the practice itself is age-old. "It's gone on forever," Applewhite says. "A fisherman goes out, harvests massive quantities of fish, whatever's in that harvest gets filleted, and once the head, tail and scales are gone, you really can't tell what it is."

Mislabeling can be inadvertent (the result of bycatch being identified as the fish species targeted) or intentional (a cheaper species, like Asian catfish, getting labeled as grouper to fetch a higher price). And it's especially prevalent because roughly 90 percent of the seafood eaten in the U.S. is imported, making tracking more difficult. 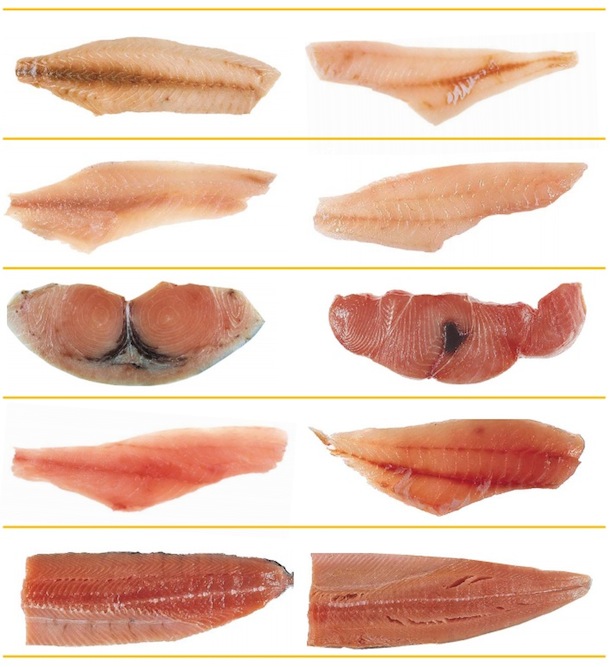 Economics isn't the only reason that a customer might come to AFT to get fish tested. For one, mislabeled fish can present health issues: In 2007, for instance, more than 600 people in Hong Kong got sick after eating escolar—a fish known to cause digestive issues—which they'd thought was cod.

There can also be environmental aspects to mislabeling. You might religiously look to the Monterey Bay Aquarium guide to avoid farmed fish or unsustainably-fished species, and select an environmentally-benign fish like halibut, but your efforts won't come to much if it's actually mislabeled sea bass. In some cases, undercover investigators have even used DNA identification to prove that some restaurants are serving whale meat, a practice banned by the International Whaling Commission.

There are many companies around the country that perform DNA testing on commercial seafood, but what sets AFT apart is its proprietary database of more than 1500 species' DNA, all of which was collected from organisms that were independently identified by museum specialists before being filleted. Other organizations, meanwhile, rely on public DNA databases that could theoretically contain errors because of the very problem they're trying to solve—mislabeled seafood.

"Anyone can enter their results into some public databases," Applewhite says. "High school students can go to the store, buy what they think is grouper, sequence its DNA and put it in the database, and end up registering a genetic sequence from bycatch as the wrong fish." 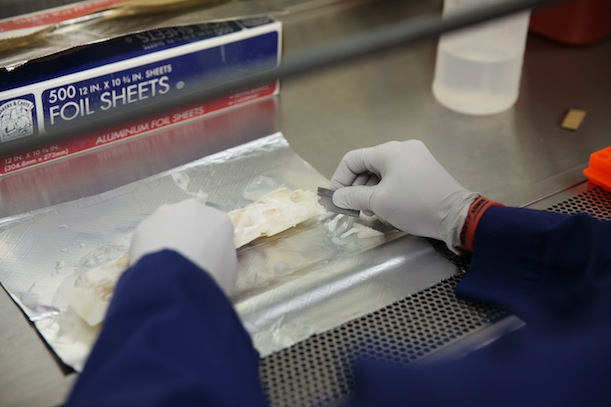 An AFT technician cuts off a sliver of fish for testing. Photo by Joseph Stromberg

To identify a piece of fish, AFT staff slice off a tiny sample from a fillet, heat it up to break down the tissue and open up its cells, and spin it in a centrifuge to extract the DNA. They put this genetic material through a technique that uses polymerase chain reactions (PCR) to produce many copies of a particular DNA segments. By amplifying just a few different genes—most often, the COI gene—researchers can readily distinguish similar-looking pieces of fish and determine their species.

Although most of the work at AFT involves seafood, DNA can be examined to determine all food species. When the horse meat scandal hit Europe last January, for instance, the company got frequent requests to test beef and pork, though they didn't turn up any horse meat. They've also looked at other biomarkers, such as isotope ratios, to investigate the origin of everything from plantains to tomatoes. "Mislabeling doesn't just occur in seafood," Applewhite says. "It occurs anytime there is a cheaper commodity that can be passed off as a higher valued one."

But seafood fraud is particularly prevalent and is likely growing—and she says that the 2011 survey by the group Oceana, which found that about a third of  seafood was mislabeled, might even underestimate the problem. "The FDA sometimes orders DNA testing for seafood imports, but right now, it only has the resources to do this for about two percent of shipments," Applewhite says. "If there was some program to make more suppliers responsible for looking at their own supplies—some sort of DNA verification seal—that might help to reduce the problem."