Science books offer an opportunity to step back from the constant stream of dramatic new discoveries to consider the broader implications of ongoing research. The books on this list attempt to piece together the long story of how humans came to be the species we are today, examine how we have change the world around us, and scrutinize the biases and shortcomings of our knowledge. These titles can help illuminate the findings of science to any casual reader, from the unexpected roles of insects, to the miraculous workings of our immune systems, to the ecological challenges we face in the future. In Origins, astrobiologist Lewis Dartnell outlines the many profound ways that the geology of our planet has shaped the development of humans and human societies. In the East African Rift Valley, for example, a chasm in the Earth’s crust created highly variable climates that human ancestors were forced to adapt to, Dartnell argues, by relying more heavily on tools and social cooperation. Retreating ice caps brought the warm and wet conditions of the Holocene, allowing for the rise and spread of agriculture. Following the dawn of history, the forces of the atmosphere and ocean continued to influence the spread of human civilizations, and such natural forces play a major role in the future of our species as well. Extraordinary Insects: The Fabulous, Indispensable Creatures Who Run Our World

Some bugs spread disease, others bite or sting, and many are just plain annoying. But these animals aren’t just creepy-crawlies: Insects are important pollinators, a food source for many bigger species, critical for decomposition, and they even keep us safe from harmful organisms. In Buzz, Sting, Bite, author and professor of conservation biology at the Norwegian University of Life Sciences Anne Sverdrup-Thygeson addresses the medley of threats that insects face, including climate change, habitat loss, pesticides, light pollution and more. Losing insects could trigger a detrimental cascade of effects on ecosystems, so to reverse your aversion to arthropods Sverdrup-Thygeson takes readers into the wonderful world of bugs. Take, for example, the chocolate midge. It’s the only pollinator that services cocoa plants, and no cocoa means no chocolate. Drisophila melanogaster, the common fruit fly, is critical to basic medical research. And without a tiny wasp that makes galls on oak trees, America’s founders wouldn’t have had ink for the Declaration of Independence. Invisible Women: Data Bias in a World Designed for Men

So much of our world—from medicine to technology—is designed with men in mind, and journalist and author Caroline Criado-Pérez has the data to prove it. In Invisible Women, the 2019 winner of the Royal Society’s Science Book Prize, Criado-Pérez lays out a parade of examples, statistics, studies and data that shows so much of our world was designed with women as an afterthought. Smartphones are made to fit the average man’s hand, voice recognition is trained on male voices, and heart failure trials are made up of majority male sample groups. This bias has created a world of, at best, inconvenience for women—they spend 2.3 times longer in bathrooms designed for male bodies—and, at worst, threats to physical health—women are 50 percent more likely to be misdiagnosed with a heart attack. Criado-Pérez cites hundreds of studies that show how society and science have systemically ignored half of the world population’s needs. 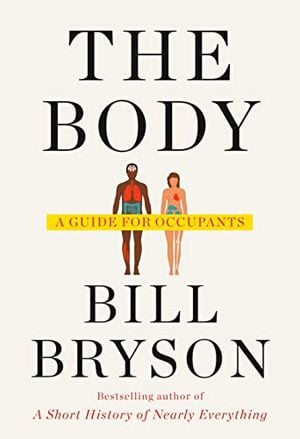 The Body: A Guide for Occupants

Sixteen years after the publication of Bill Bryson’s acclaimed popular science book A Short History of Nearly Everything, the witty and accessible author has turned his attention toward the workings of the human body. Chapters focus on different parts of human anatomy, from our skin and our brains to the circulatory system, skeleton and tens of thousands of microbes hitching a ride in and on us. Bryson examines the wonders of human biology, the history of medicine and surgery, and the sometimes frightening world of diseases. Full of profound insights and amusing anecdotes, The Body is a perfect book for anyone who wants to learn a little more about the fine-tuned biological machine that is the human form. End of the Megafauna: The Fate of the World's Hugest, Fiercest, and Strangest Animals

Thousands of years ago, giants roamed earth. Alongside familiar woolly mammoths and saber-toothed cats, oversized bears, wolves and beavers spread across North America. Ground sloths over 12 feet tall on their hind legs lumbered across South America, 10-foot-tall flightless birds thrived in Madagascar, and deer measuring 7 feet tall at the shoulder—with antlers as wide as 12 feet from tip to tip—ranged from Ireland to China. In End of the Megafauna, mammologist and curator at the American Museum of Natural History Ross MacPhee investigates the extinction of these behemoths, complete with beautiful color illustrations from zoology and paleontology artist Peter Schouten. The loss of the world’s megafauna due to human hunting, dramatic climate change at the end of the last glacial maximum, or some combination of factors provides a cautionary tale for the future of life on earth. The First Cell: And the Human Costs of Pursuing Cancer to the Last

The way doctors treat cancer—and researchers look for new ways to fight the disease—is to destroy every last malignant cell. Current techniques, such as chemotherapy, are frequently physiologically damaging and extremely expensive. Oftentimes taking potent drugs and attending treatment buys a patient only a few more months to live, leaving them exhausted and weakened. Cancer treatment has evolved, but patients with some types of cancer still die at virtually the same rate as patients 50 years ago.

Author Azra Raza, a Columbia University professor of medicine and practicing oncologist, lays out a radical plan to shift the focus of cancer care from fighting the disease in its final stages to finding the very first cells. In The First Cell, Raza relies on her experience studying cancer in a lab, treating terminally ill patients and witnessing her husband’s battle with leukemia to outline exactly how science and society has been mistreating cancer—and how she envisions a revolutionary rethinking of the path forward. Eating the Sun: Small Musings on a Vast Universe

Scientific language can be largely restrictive, laced with jargon and dense technical writing. But sometimes science is quite poetic. Consider the term eigengrau, used by scientists to describe the grayish hues our eyes see when its dark; or chronoception, a word to describe our perception of time. In Eating the Sun, author Ella Frances Sanders takes readers on a breezy journey of discovery with a collection of short essays on fascinating topics from orbital mechanics to the microbiome. The title of the book refers to photosynthesis, “[the] digestible sun fuel that we are consuming.” Sanders introduces the reader to the whimsical—but science backed—idea of plant “memory” and “learning,” alongside statistics about the rate of plant extinction. She leaves readers armed with hard data, like how the average 80-year-old has taken 700 million breaths in their life, as well as important science facts, like how global warming affects Earth’s rotation. Sanders’ own illustrations are paired with each essay on science and astronomy, perfect for the casual and the curious reader. The End of Ice: Bearing Witness and Finding Meaning in the Path of Climate Disruption

For the residents of Utqiagvik, Alaska, the northernmost city of the United States, climate change presents daily challenges. Thinning ice sheets and rising seas threaten Inupiat communities’ way of life as previously sturdy land routes melt away and infrastructure built on permafrost slips into the ocean. Animals critical to subsistence hunting migrate to new regions, and rougher seas make navigation along the coasts more perilous than ever. Some estimates suggest the Arctic could have ice-free summers by mid-century, a possibility that would have devastating effects for communities across the northern reaches of our planet. In The End of Ice, journalist and mountaineer Dahr Jamail travels to some of the northernmost inhabited areas in the world to chronicle the encroaching and devastating effects of climate change. Superior: The Return of Race Science

In Superior, science journalist Angela Saini presents a meticulously researched account of the racist biases in scientific studies and the damage and violence that such studies can cause. From archaeology and anthropology to biology and genetics, researchers around the world continue to group humans according to race and seek out ostensible intrinsic traits that separate various groups, often arriving at inaccurate and dangerous conclusions. For example, scientists have long searched for a biological cause of high rates of hypertension, or high blood pressure, in African Americans. But Saini provides evidence that environmental factors such as discrimination and poverty can lead to hypertension, and she points out that rural Africans actually have lower instances of high blood pressure. The temptation for scientists to ignore complex social structures in favor of singular, biological explanations of perceived differences among humans can fuel extremist beliefs with devastating outcomes—something Superior reminds us to be wary of when reading about “objective” scientific research. The Reality Bubble: Blind Spots, Hidden Truths, and the Dangerous Illusions that Shape Our World

There is more to the universe than meets the eye. What we can see influences and even limits our perception of the world around us. Other animals can see infrared or ultraviolet light, for example, and experience an existence entirely different from our own. To see what is inside our bodies, we need X-rays. We use microscopes to see tiny things and telescopes to see distant but massive things. All of these innovations give us the opportunity to literally see beyond the capability of the naked eye.

In The Reality Bubble, science journalist Ziya Tong explains in three parts how humans only experience a small sliver of reality. Tong starts with the literal limitations of sight and the tools we use to see the unseeable. She then shifts to illuminate the many processes that power our existence but remain out of sight and out of mind, such as where our food comes from, how we use energy, and where our waste ends up. Tong puts a spotlight on our tendency to ignore aspects of our own survival, concluding with the way civilization has crafted its own false narrative of history—and how those falsehoods can harm us. By redoubling our efforts to accurately perceive the world around us, Tong argues, we may be able to craft a better future for humanity.