It's an almost immovable mess, that dreaded sinkful of piled-up bowls, plates and utensils that's often a major point of contention between spouses and roommates. If only there was a way for dishes to never get dirty in the first place.

Believe it or not, science is working on that. And the latest sign that researchers are on the cusp of a breakthrough is a plate and bowl set that’s imbued with a supposed special “self-cleaning” coating that makes it impervious to dirt and liquids. Swedes Hanna Billqvist and Anna Glansén, the designers of this intriguing concept, developed the prototypes through a collaboration with Stockholm-based natural materials research firm Innventia and the KTH Royal Institute of Technology. The Swedish Forest Industries Federation commissioned the project, as a means of exploring new ways to use harvested cellulose—the pulp-like extract that makes up the fibrous cellular walls of plants is already used to make paper—by the year 2035.

The innovative tableware is comprised of a special variation, known as nanocellulose, that’s not only lightweight and malleable, but also durable enough to withstand accidental drops. In fact, the wonder material's strength is on par with Kevlar, a synthetic fiber that’s used in manufacturing bulletproof vests and other impact-resistant products. Shaping the material into usable dining sets involves producing a flexible sheet that can be heat-pressed into a specific mold. To decorate the bowl, the designers employ a marbling technique, giving it a blended blue-and-white glazed appearance. 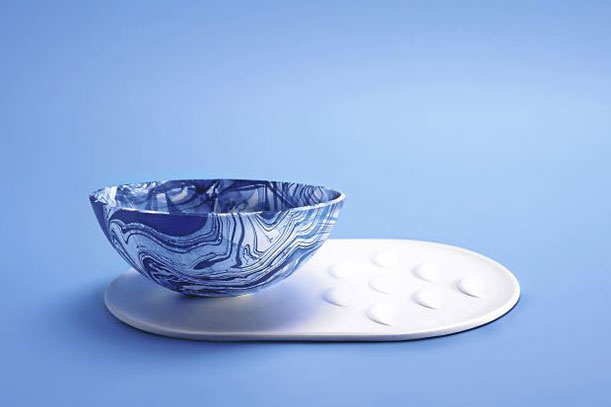 Self-cleaning properties are added through the application of a super-hydrophobic coating that Glansén describes as all-natural and engineered to mimic the the water-shedding ability of the lotus leaf. A surface is considered super-hydrophobic when it repels liquids at a very high "contact angle" (175 degrees), meaning the angle where a water droplet comes in contact with the surface. The higher the contact angle, the better it is at causing water to bead off. A remarkably super-hydrophobic surface, for instance, is found on the wings of butterflies. Though Glansén wouldn't go into specifics about how the water-resistant coating works, Billqvist did disclose some details to the design blog Dezeen.

"KTH are using a process called Rapid Expansion of Supercritical Solutions (RESS) to make the surface superhydrophobic," Billqvist told Dezeen. "A wax is dissolved in carbon dioxide at high pressure and temperature, and then sprayed onto the surface to be treated."

However, the use of hydrophobic technology around edible goods has so far been a sticky issue. Some raised public safety concerns, for instance, over Teflon, a nonstick coating approved by the FDA for use in cooking food, when it was shown that perfluorooctanoic acid, a key chemical agent in the processing of the material, may be linked to an increased risk of cancer and birth defects in animal studies. Dupont’s product website states that the coating is stable and non-toxic at cooking temperatures of up to 500°F (260°C). And a review of the product's safety done in 2006 by the Environmental Protection Agency's scientific advisory panel concluded that while perfluorooctanoic acid, or PFOA, is a "likely human carcinogen, " the risk is limited to PFOA that gets released into the environment as a byproduct of manufacturing Teflon.

"The link between Teflon cookware and cancer is an entirely different subject," University of Pittsburgh chemistry professor Robert Wolke, told WebMD.com. "There is no PFOA in the final Teflon product, so there is no risk that it will cause cancer in those who use Teflon cookware."

There are encouraging indications that similar food-safe hydrophobic containers are likely to be introduced later this year. In 2012, a team of researchers at MIT invented LiquiGlide, a spray-on, non-toxic, hydrophobic coating that they demonstrated would enable sauce bottles to empty entirely. As shown in the video above, the “permanently slippery surface” makes it easy for any leftover portions of ketchup residue to slide out without a trace. A recent report on MSN found that the developers of the technology are running tests to ensure it meets the safety and sanitation standards of the FDA for use with food.

Glansén says that the the self-cleaning plate and bowl is not only safe, but has been shown to work exactly as advertised, on both water and oil-based foods. To clean it, she says, just turn it sideways or upside down over a sink. "There are products on the market that are superhydrophobic coatings, but they cannot be used in connection to food, and they are made from other chemicals," she says. "This new technique is based on natural substances."

Though it's still only a concept, she says that the technology is meant to be a long-term solution, as it’s being researched and developed for products with a "long life-span." For now, the designers' client, Innventia, holds the rights to the project and is exploring its feasibility in the consumer marketplace.