In today’s computer- and data-centric world, coding is king. Yet it is no longer the sole domain of programmers in office cubicles, converted warehouses or frowsy basements; stringing together computer commands that make it all work is truly for everyone, it seems.

At any rate, that’s the impression one gets while leafing through the 2019 edition of Purdue University’s Engineering Gift Guide. Produced by Purdue’s INSPIRE Research Institute for Pre-College Engineering, the guide is now in its sixth year, and editor-in-chief and project lead Elizabeth Gajdzik says coding-focused items are definitely a strong trend in STEM-oriented products across the board.

“People are thinking about it for younger ages, as well—baby books, preschool toys to introduce coding and programming concepts,” Gajdzik says. She adds that companies are also increasingly responding to parents’ desire for more screen-free, unplugged toys—card games, block- and tile-based puzzles, and building kits, for example.

With so many toys branded as “STEM,” how can parents discern what is truly educational, or just an attempt to cash in on the buzzy catchword?

“The good companies explain what STEM skills or concepts their products teach,” Gajdzik says. On the box, in the instructions, or somewhere on the product website, look for key phrases: logic, problem solving, spatial reasoning, working collaboratively and computational, critical or creative thinking.

“Parents also need to know that a STEM toy doesn’t have to be something totally complicated,” Gajdzik adds. “Traditional wooden blocks, Lincoln Logs—LEGOs, all those things are awesome. But there are companies that add a twist and additional context.”

These are Gajdzik’s recommendations for the ten best new STEM toys (and a few honorable mentions) across different age levels. 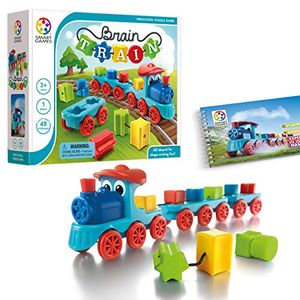 This puzzle toy combines two “little kid” classics: shape sorting and trains. But to string the train cars together correctly, players must arrange the blocks in a sequence that couples the locomotive with the wagon. Though kids can experiment on their own with ways to put the train together, the kit includes a book of logic-stretching picture challenges that prompt players to try a variety of strategies to get the train to “go.” (Smart Games USA, $29.99 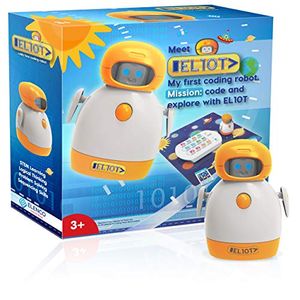 “Programming code” and “preschoolers” seem to be diametrically opposed—unless blocks and robots are involved. To lay out a course for the little robot to follow, young players of EL10T arrange interchangeable pieces on a game grid, then push a button to upload those instructions to a helmet attached to the board via USB. Pop the helmet onto the robot, and away it goes—unless there’s a problem, at which point young users must debug their program to get EL10T to its destination. (Elenco, $89.95) 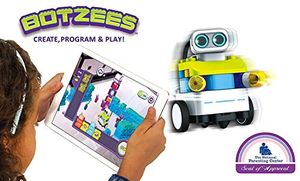 Kids can follow directions or use their imaginations to build a robot out of the 130 blocks in the Botzees kit—and then command it to dance, warble, drum and light up with the companion app on a compatible smart device or tablet (not included.) The app includes 30 interactive augmented reality puzzles designed to teach coding principles. Though the Lego-style robot-building appealed to younger testers, Gajdzik says kids ages 5 and up enjoyed the toy’s advanced features. (Pai Technology, $99.99) 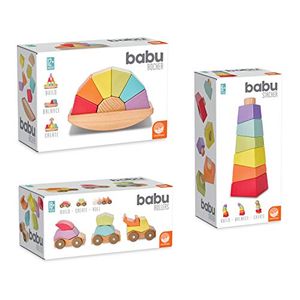 A send-up of a classic block-building toy, Babu challenges players to balance a stack on a curved base, try out different styles of towers or construct whimsical cars. Each component in the set is available for individual purchase. (MindWare, $59.95) 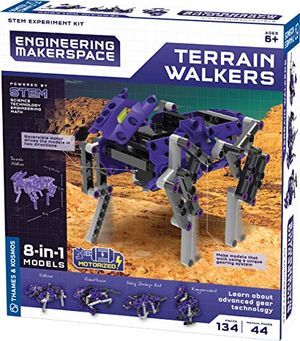 Terrain Walkers focuses on demonstrating how motors, gears and linkages function via animal locomotion. The kangaroo was a particular hit, but other animal builds in the kit include a leopard, mouse, boar, monkey—and a mantis shrimp, complete with leg-like swimmerets. (Thames & Kosmos, $29.95)

This Tetris-like stacking game is reminiscent of Connect 4. Players plug the pieces into a vertical grid, but the aim—with one or two players—is to get the pieces to fill the grid perfectly, without protruding past the grid’s open edges. Players engage spatial reasoning and strategic thinking skills, and persistence and debugging pay off to get the blocks to fit just right. The illustrated challenge book offers puzzles of escalating difficulty; Gajdzik says parents will appreciate the travel-friendly case, which collapses flat and holds the pieces secure inside. (Educational Insights, $19.99) 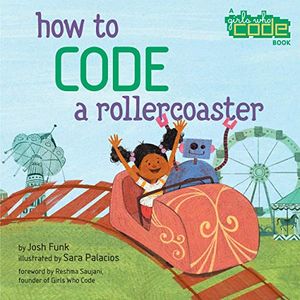 How to Code a Rollercoaster

Just like coding can be used to tell stories, this is a story about coding: Josh Funk’s picture book follows Pearl and her robot friend, Pascal, as they enjoy a day at an amusement park. “This book does a good job of introducing and explaining what code is, how computers understand it, and introducing common coding terms—variables, loops, if/then,” Gajdzik says. The volume is part of the popular “Girls Who Code” series, but geared for the younger reader. (Penguin Random House, $17.99) 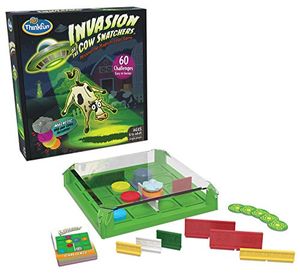 Invasion of the Cow Snatchers

In this logic puzzle reminiscent of Gary Larson’s “Far Side” comics, players must collect a series of bovine-emblazoned disks with a UFO-shaped magnet. The challenge lies in that this must be done in a prescribed order (according to challenge cards included with the game), from the other side of a clear dome covering the game board, and around obstacles of varying heights. (ThinkFun, $29.99) 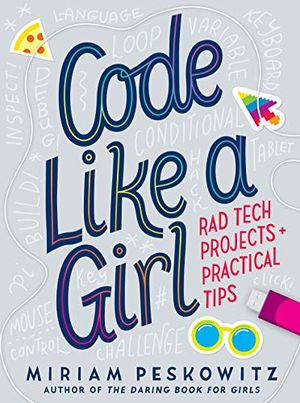 Code Like a Girl: Rad Tech Projects and Practical Tips

One of a handful of apps that show up on this year’s list, SimpleRockets is available for PC, Mac and Android as well as mobile devices. Budding engineers learn about rocketry components, and how to design a successful launch vehicle. Want your rocket to be traveling 750 meters per second by the time it reaches an altitude of 10 kilometers, but be no more than 2 degrees off vertical? SimpleRockets2 has you covered. (SimpleRockets.com, $4.99) 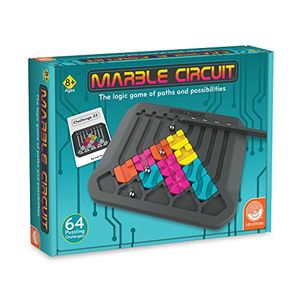 With brightly colored pieces and a deceptively simple layout, Marble Circuit doesn’t present as a tough logic game—but don’t underestimate its difficulty. After drawing a challenge card, players must arrange pieces and fill in gaps on the game board to allow the right number of marbles to run through the channels and into each bin at the bottom of the board. Because it requires more patience and abstract, critical thinking skills than some other kinds of logic puzzles, Gajdzik strongly recommends Marble Circuits for the solid over-8 crowd. (MindWare, $24.95) 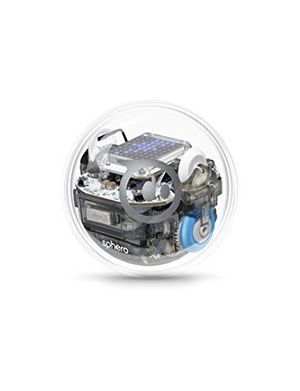 Gajdzik slots this programmable, LED-lit gyroscopic sphere into the honorable mention category partly due to its higher price point—but Bolt certainly gives the other Top 10 a run for their money in the fun and aesthetics categories. “This is a more mature version of Botzees,” Gajdzik says. With code programmed from the companion app, users can tell the sphere where to go and what to do—engaging skills like math and spatial reasoning to estimate the distance to, say, the ramp you want the Bolt to launch from. Sphero also makes a smaller, more affordable version, the Mini. (Sphero, $149.99) 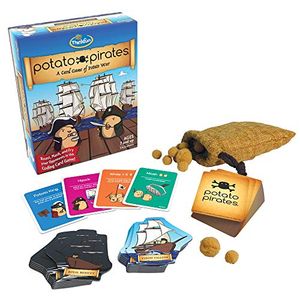 A rare coding game that is at a very affordable price point, Potato Pirates is also unplugged, being a card game. As an introduction to coding, Gajdzik says that even her undergraduate testers loved the silliness of the game, and would spend hours on the floor of the lab giggling at the game’s instructions to yell “All Hail! Potato King” whenever a certain card appeared. Players attack opponents via layers of function cards to loot, hijack and sink ships, and ultimately win by collecting all seven fluffy, felt and russet-colored Potato Kings. (ThinkFun, $14.99) 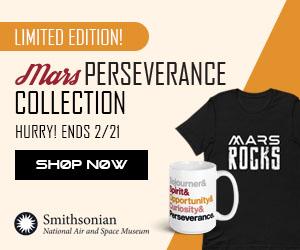