Is Seaweed the Next Big Alternative to Meat?

From kelp burgers to bacon of the sea, sustainable food entrepreneurs are innovating to charm hungry omnivores 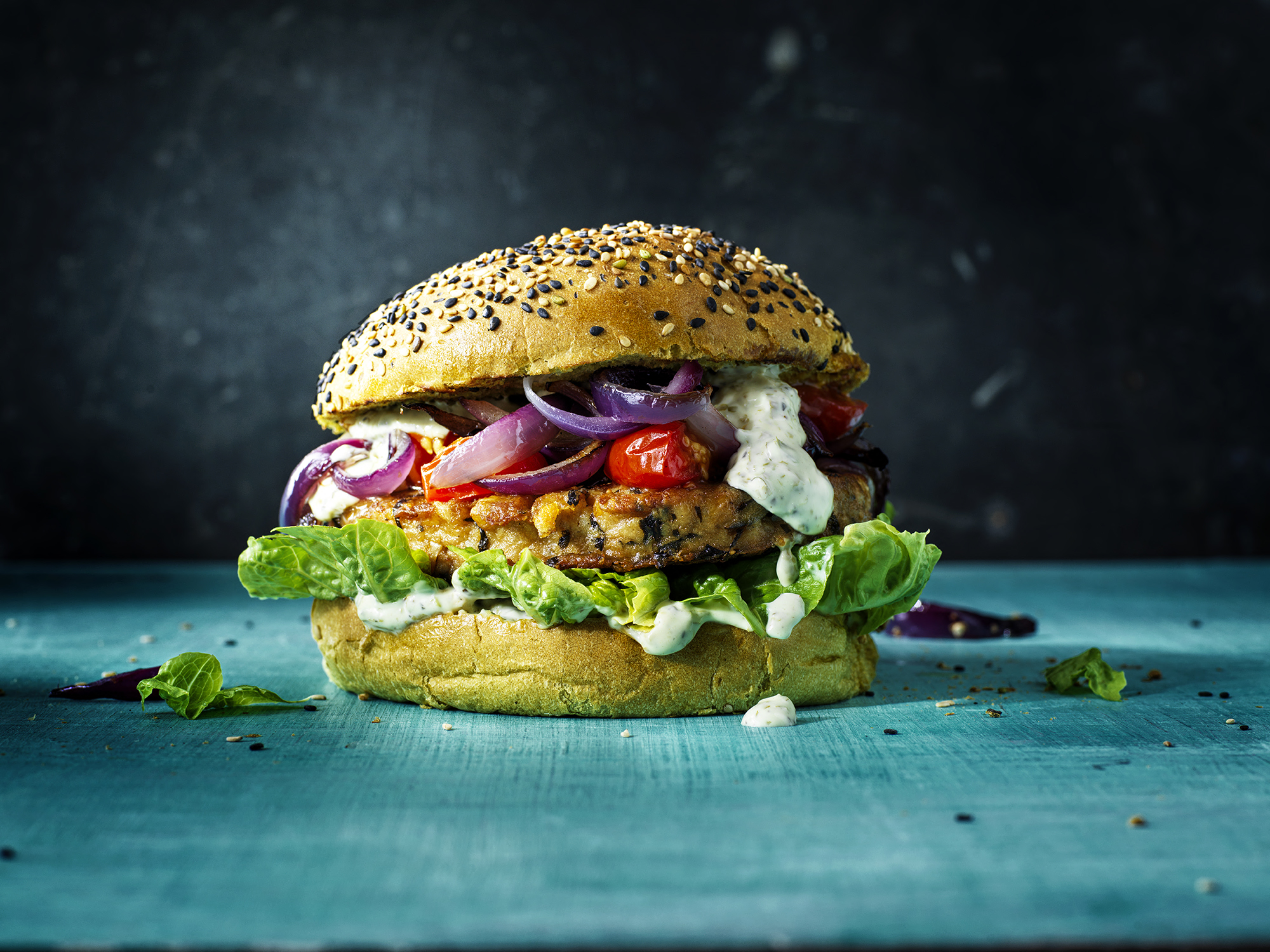 When vertebrates first heaved themselves out of the sea some 390 million years ago, terrestrial life was good: the atmosphere was rich with oxygen, and competition for food was virtually nonexistent. The coast was clear.

In 2022, life on land is rockier. Earth’s human population is expected to swell to 9.7 billion by 2050; experts estimate that food production will have to increase by 70 percent to keep pace with that growth. “Previously utilized methods of intensifying agriculture will soon no longer be an option due to the high impact trade-offs they have on the environment,” reads a 2017 research review. These trade-offs include “fragmenting natural habitats and threatening biodiversity, production of greenhouse gases from land clearing, fertilizers and animal livestock production, and nutrient run-off from fertilizer damaging marine, freshwater and terrestrial ecosystems.”

According to a bracing 2018 farm-to-fork study analyzing 40,000 farms producing 90 percent of the food eaten on this planet, we’ve got to turn away from meat and dairy products if we expect to sustain ourselves in coming decades. U.S. consumers have proved themselves willing to test the waters: according to market research from the Good Food Institute, a nonprofit that promotes alternatives to animal agriculture, Americans spent $1.4 billion on retail plant-based meat (which found its way into 19 percent of households) in 2021, representing a market share of 2.7 percent of all retail packaged-meat dollar sales. The plant-based food companies Beyond Meat and Impossible Foods—two household names in America’s now-substantial faux-meat market—contend that their burgers use significantly less land and water and generate less greenhouse gases than beef-burger equivalents, as the New York Times has reported.

A far smaller but just as motivated cohort of plant-based food entrepreneurs aim to do them one better by spotlighting and advancing an ingredient that requires no land or water and has, they argue, just as much potential to please Western palates. Consider, if you will, the possibility that we left our most promising resource behind in the ocean. Will you swap meat for seaweed?

Though seaweed has been a staple of East Asian diets for hundreds of years—South Koreans, for example, consumed 20.4 pounds of seaweed per capita in 2020—it remains a boutique food product in Western countries.

“I think seaweed needs branding,” says Mark Kulsdom, a former animal-rights activist and co-founder of the memorably-named Dutch Weed Burger. He approached that hurdle with a shoutout to his country’s thriving cannabis culture. “Especially because we are from the Netherlands and from Amsterdam, people got their interest up—and that’s when we lured them in.”

Royal kombu (aka sugar kelp) harvested from the Netherlands’ first organic seaweed farm enriches and flavors the Dutch Weed Burger’s soy-chip-based patty, which is served on a bun tinted green with microalgae and garnished with sauce featuring sea lettuce. Kulsdom describes the burger as having a briny character with roasted notes. “It’s a mix between familiar and new flavors, and that really works well,” he says. “People don't associate it therefore with a meat replacer but [approach it as] a standalone plant-based burger.”

As Kulsdom explained in his TEDx Talk at Tilburg University in 2015, Dutch Weed Burgers are “also vegetarian, but for meat eaters.” A decade after launching their first product, he and his partners now sell about quarter of a million burgers each year—and still favor cheeky appeals to omnivores. “[Saying] ‘This is for meat eaters, but veggies can also eat it’ is funny, since it’s usually the other way around,” he says. “[We’re] playfully getting people to rethink and recalibrate their habits.”

Ultimately, Kulsdom is striving for a culture change. “I believe we need to raise eyebrows sometimes by using a bit of an unorthodox approach to things,” he adds. “When people get what they already know, it’s not that interesting. When their curiosity is awakened, that’s when new things and ideas can enter their minds.”

AKUA, a meat-alternatives-made-from-kelp company based in Brooklyn, New York, partners with GreenWave (a nonprofit network of regenerative ocean farmers) and sources its aquacultural products from sustainable farms in New England. Founder Courtney Boyd Myers, an entrepreneur who has long prepared seaweed as a home cook, zeroed in on its environmental promise after a 2016 visit to GreenWave’s Connecticut farm. AKUA was born three years later to spread the word.

“We use a combination of sugar and skinny kelp [a new cultivar of sugar kelp] in all our products, including our jerky and burgers,” Boyd Myers explains. AKUA’s Spicy Chili & Lime Kelp Jerky contains a microalgae called spirulina, while the company’s Kelp Burgers and Krab Cakes feature ‘water lentils,’ or duckweed, which is 45 percent protein. “Looking forward, we’d love to incorporate several different varieties of seaweeds in our products,” she adds, “as long as they are grown in a sustainable way.”

Like Kulsdom, Boyd Myers acknowledges that seaweed calls for a thoughtful matchmaker. “Our Kelp Jerky is over 70 percent kelp, which we’ve learned is too kelp-forward for the mainstream consumer,” she says. AKUA is in the process of reformulating its jerky. “We dropped the kelp to about 30 percent in our Kelp Burger recipe and combined its flavor with more familiar flavors like tomatoes, extra virgin olive oil, black beans and quinoa, and people really love the burger, whether they love eating seaweed or not,” she explains.

Even so, in a restaurant context, explaining what a kelp burger is to a customer through a menu isn’t as straightforward as most professional chefs would like. “I am betting that our plant-based Krab Cake will be a much faster win in food service for this reason,” Boyd Myers says. “Most people will immediately understand what a plant-based crab cake is, and the fact it’s made with kelp—a plant from the ocean—just makes a lot of sense.”

These culinary pitches are well worth making, she argues. “[Kelp] grows really fast—about a foot per month—which makes it even more efficient than most land-based plants at absorbing carbon dioxide and turning it into its biomass and oxygen,” Boyd Myers says. “Our ocean is one of the biggest absorbers of carbon dioxide, so kelp forests and kelp farms have a vital role to play in combating climate change and helping deacidify our oceans.” In fact, researchers hope to one day sequester massive quantities of carbon by sinking kelp into the deep ocean. According to a 2019 research review, the technology needed to do this on a meaningful scale doesn’t exist yet—but more than 48 million square kilometers of the oceans are suitable for seaweed aquaculture that could benefit coastlines in at least 77 countries by acting as “charismatic carbon” that buffers eutrophic, hypoxic and acidic waters. “Seaweed offsetting is not the sole solution to climate change, but it provides an invaluable new tool for a more sustainable future,” the researchers noted.

The plant-based meat category includes both analog offerings, meaning those intended to match the appearance, texture and taste of animal meat (which made up 90 percent of U.S. sales last year), and non-analog offerings, such as black bean and veggie patties (the remaining 10 percent). Dutch Weed Burger’s and AKUA’s offerings are examples of the latter; as for the former, a new company is hoping to make seaweed’s strongest case yet.

Umaro Foods—a Berkeley, California-based company that secured a $1 million investment on an episode of ABC’s business reality show Shark Tank that aired this April—debuted its seaweed bacon just last week at three eateries in San Francisco, Nashville and New York City. The company’s patent-pending protein is a functional replacement for heme, the red precursor to hemoglobin that enables some plant-based products to “bleed” and mimic meat, with the same color and umami enhancing properties. Cofounders Beth Zotter and Amanda Stiles intend to make a splash with their innovation.

“[We] are firm believers that you can’t guilt people into eating less meat. You have to make something that tastes delicious and that also delivers all the nutritional profile that people expect,” Zotter says. “[Bacon is] a product notorious for being hard to give up for vegetarians. It’s sort of like the gateway drug that makes people revert back to full-on carnivory. So we’re really excited to hopefully provide the product that’s the gateway in the other direction that finally allows people to give up meat.”

Kelp is comparatively low in protein, but Umaro Foods has found another aquatic plant that delivers it in spades. “The seaweeds that we’re using right now are red seaweeds, in particular nori, which is actually up to 40 percent protein—even higher than a soybean,” Zotter explains. Soybeans derive 35 to 38 percent of their calories from protein, per the U.S. Soybean Export Council. “We see a potential for technology and even traditional breeding programs to increase the protein content of seaweeds and make it a really high-quality, large-scale source of protein to basically compete with soy in both cost and scale,” Zotter adds. In their present incarnation, four strips of Umaro’s seaweed bacon featuring its proprietary protein ring in at 240 calories and deliver one gram of protein.

Zotter and her partners aren’t just looking to seaweed for protein. “[The bacon] employs the protein but it also employs the hydrocolloids, which are the gels that make seaweed bouncy and squishy,” she says. “So we’re using those hydrocolloids to create a really great fat analog. One of the things that makes bacon so delicious is how much fat it contains. We’ve used the seaweed hydrocolloids to effectively—and this is one of our innovations that’s patent pending—to encapsulate plant-based oils like sunflower oil and coconut oil inside of a matrix that essentially replicates the mouthfeel and crispy texture and fat release of animal fat.”

Is it working? At New York City’s Egg Shop, one of the bacon’s three debut restaurants, tasters reported a smoky depth of flavor, springy crispiness, and a strong salty profile that adds dimension to breakfast sandwiches.

The Umaro Foods team hopes to build on the momentum of alternative-protein success stories like Beyond Meat and Impossible Foods to lead meat eaters to even more scalable, sustainable swaps, and they welcome company. “I think there’s room in a growing market for lots of people to compete,” Zotter says. “Competition means that the products are going to get better, and I think that’s good for everybody right now.”

In 2008, researchers discovered 14,000-year-old seaweed fragments in southern Chile that had been pressed into cakes and chewed like tobacco, as well as fragments that had clearly been cooked. As they wrote in Science, the scientists found that all nine species of seaweed recovered at the site are “excellent sources of iodine, iron, zinc, protein, hormones, and a wide range of trace elements, particularly cobalt, copper, boron, and manganese,” with secondary beneficial effects that include “aiding cholesterol metabolism, increasing the calcium uptake of bones, antibiotic effects, and increasing the body’s ability to fight infection.

Though Mark Kulsdom’s Dutch Weed Burger, Courtney Boyd Myers’s Krab Cakes, and Beth Zotter’s UMARO™ Bacon all sound comparatively futuristic, one could argue that they’re revisiting one of the oldest stories we know.