In October, I wrote about an expanding chain of semi-automated restaurants in Japan that feature various sophisticated technologies to allow customers to order dishes, refill drinks, tally up the bill and dispose whatever's left without ever having to call for a waiter. But if servers are being outsourced by equally efficient machinery, you’d figure at least the skilled mixologist working behind the bar has some semblance of job security, right?

Well, sometime early next year, a small subset of patrons will be able to sample a precision-poured cocktail concocted by a smooth operator named Monsieur, otherwise known as the artificially intelligent robotic bartender. Place a glass cup in the the boxy machine and, in about 10 seconds, it’ll throw together something as basic as screwdriver or mix more ingredients to whip up tiki bar specialties like a Bahama Sunrise—all with a tap or two on the machine’s Android tablet-powered touchscreen. And unlike your neighborhood barkeep, it won’t notice if you are a cheapskate and don’t leave a tip.

Atlanta-based entrepreneur Barry Givens says, however, that his invention isn't intended to put anyone out of work. Rather, the device was conceived as a way to augment service at busy establishments by handling 80 percent of the most common and fairly standardized drinks, so that bartenders can focus on crafting more involved orders like flaming drinks or mojitos, which require hand-crushing mint leaves. The Monsieur would be on hand to ensure that late arrivals at a packed club don’t have to wait two hours for a Jack and Coke, an experience that prompted Givens to invent the device.

“It’s not going to shake a drink or drop in a garnish,” Givens says. “But it can still help the bartenders by preparing a measured martini mixture to shake."

The 28-year-old mechanical engineer jokingly admits that while he isn't the first person to have ever thought of the concept, his company may be the first sober effort to make something that businesses and consumers would take seriously. Cocktail-making systems are quite popular among amateur inventors, as competitions are held at events such as BarBot, where tinkerers show off garage-style contraptions complete with swiveling robotic arms and laboratory flasks. Though Givens is a big supporter of the event’s "maker spirit," the former corporate manager spent the last two years assembling prototypes and developing proprietary software, which has culminated in a polished product that functions more like an industrial appliance than a hobbyist-styled DIY project.

"Turning the idea into something people would think of as practical was the hardest part of the process," Givens says. "Every time we'd do a showroom event, we'd get feedback and then would have to change something with the hardware. Just something like adding refrigeration capabilities meant we had to redesign everything."

After two years of development, Givens believes he has created a technology that's both sophisticated and foolproof. Sensors inside the system can detect when a glass is placed beneath the spout. Behind the encased 2-by-18-by-21-inch robo-mixer are 16 compartments in which liquor bottles, juices and soft drinks (up to 15,000 ml) can be dropped into place. Peristaltic pumps, along with a metering pump that pours to the desired milliliter, move the liquids through tubes in the machine. 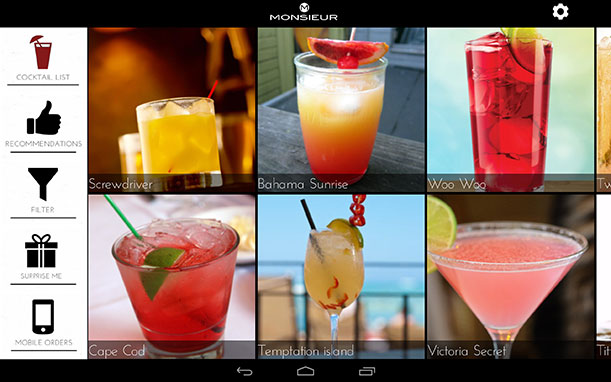 The interface is designed to make ordering a no-brainer; it organizes customizable options into various filters. Individual drinks, for instance, are categorized by themes, such as kid-friendly non-alcoholic beverages or, simply, Las Vegas. Each of the 12 themes offers about 25 drink recipes that are pre-programmed into the software. After selecting a drink, you can specifying how strong you want it by moving a slider that ranges from "lightweight" to "boss." If you aren't sure what you're in the mood for, you can choose the “surprise me” menu option, which instructs the Monsieur to pick a drink at random.

The true innovation isn't so much the mechanical action, as it is the artificial intelligence integrated deep within the system's software. The Monsieur utilizes a set of baked-in algorithms and other feedback-orientated features to learn each user's personal taste and habits; it stores the data as part of a profile. If a user, for example, arrives home from work an hour later than usual, it’ll know that the person likely had a long day at the office and mix a double. And if the Monsieur senses an unfamiliar smartphone trying to connect to Wi-Fi, it deduces that its owner has a guest, in which case it prepares two drinks.

“The A.I. comes in handy especially when you, for instance, come home with a date. It will prime itself to pour her a martini since it knows you have company," Givens says.  “Some guys call it a bachelor's dream."

Other "smart" features include:


Givens launched a crowdfunding campaign on Kickstarter back in October and raised over $140,000 to start production on the $4,000 robotic bartender. He estimates that the earliest shipments should arrive in the spring, with a bulk of the orders coming from businesses. Though the $1,500 home-consumer version with four compartments hasn't been nearly as popular as the commercial-grade version, Givens plans to develop a newer model with a friendlier price point of around $300. The release of this miniature device should be reason enough for more people to celebrate.