Growing up in inner-city Memphis in the 1970s as a self-described “nerdy girl,” Kimberly Bryant joined the math team and took honors courses in science. But she found few role models—neither parent had a math or science background. When she got a scholarship to Vanderbilt to major in electrical engineering, “I didn’t have a clue what it involved,” she says. Degree in hand, she launched a career at companies such as DuPont, Genentech and Merck. It wasn’t until her own daughter, Kai, went to a game development camp at Stanford in 2010 that Bryant realized how little had changed: Kai, then age 10, was one of the few girls in the group—and the only person of color. Bryant was stunned by the lack of diversity. When the topic came up months later at a UC Berkeley conference for female entrepreneurs, panelists blamed the lack of qualified women ready to take on tech jobs. That’s when Bryant decided to “change the equation,” she says. “I wanted to create an organization that would feed this pipeline.”

In 2011, Bryant launched Black Girls Code, a San Francisco nonprofit that offers weekend workshops and summer camps in programming, robotics, web design and mobile app development to girls as young as 7. At first, most of the girls didn’t know what computer science was. “They all have cellphones, perhaps a tablet or a notebook that they do homework on,” says Bryant, a 47-year-old single mom. “But most of them don’t have a background in being a creator or an innovator.”

She aims to change that with free and low-cost workshops that range from a single day to a few weeks. The sessions are run by volunteer mentors from the group’s sponsors—Google, Oracle and Microsoft, among others. Tapping away on computers at local colleges or tech companies, the girls work in pairs or small teams to solve real problems. At one recent “hackathon,” they built mobile apps designed to combat teen domestic violence. Some coders are newbies, but others are advanced, returning for workshop after workshop. A few even boast their own apps on iTunes and the Google Play store. “We’re creating this new breed of techies who are going to be the ones starting the tech companies of the future,” Bryant says. She has an audacious goal for what she likes to call “the Girl Scouts of coding”: reaching one million girls by 2040. The group has already trained 3,000 girls and now has seven chapters across the United States—and one in Johannesburg, South Africa. It plans to expand to eight more cities by the end of 2015.

Nobody understands the inspiration of Bryant’s innovation better than the young women who’ve participated in Black Girls Code sessions. So, by reaching out to thousands of BGC alums, we crowd-sourced this portrait, a sort of hackathon of words drawn entirely from their responses:

She showed me that even if you may not start off as the best, if you try, you can get there. —Janay

I learned from Ms. Kimberly Bryant that I can do whatever it is that I want to do because I am a Black Girl who Rocks!!! —Logan

She is inspirational to all of the girls. She lets us know that we can do anything!! —Sasha

I started 7th grade in August and I know that some girls are going to stop liking math, science or computers because they think boys won’t like them. That’s sad!! I love math, science and computers, and if a boy or girl makes fun of me for that—who cares!!! BGC rocks!! —Sofia

I want to be someone who uses coding in my profession. —Nicole

When I grow up, I want to be a science technologist to help people all around the world with their sicknesses. —Alexandra

I want to be a doctor who helps heal sick people and find cures for things that make people sick. —Taylor

I’m only 12 now and I’m not sure what my career will be, but I know it will have something to do with math, science and computers. I love all 3!!! —Sofia

I want to be an entrepreneur when I grow up. —Kimora

I want to be an engineer and design math games for girls. —Sasha

I would like to become a computer scientist when I grow older. —Aliana

When I grow up, I aspire to become a quantum physicist. —Mai

I would like to become a schoolteacher, but I would still like to be able to code well and have a degree in psychology. I want to be a lawyer. —Asia

I have no clue, but technology is what I need to understand. —Tsia

It’s our right to be able to participate in a professional field that is quickly taking over the world! —Tsia Blacksher, 15, California

Why shouldn’t we???!! We should be able to work with computers and apps and make games—not just buy them. —Sofia Mojica, 12, Illinois

Coding is becoming more and more important in our society as technology becomes more important, so black girls should have places to learn to code, especially since not many black girls in the past have had that chance. —Calista Benson-Williams, 13, Illinois

We are very under-represented in programming. Things that we find interesting may not see the light of day. We would like to program so that we are represented. —Sasha Williams, 13, California

Black Girls Code has changed my feelings about my future plans by seeing the sky is the limit. —Logan Clopton, 12, Georgia

Before I didn’t believe I was even able to pursue such a career, however attending Black Girls Code helped me realize that coding isn’t just for a select few, but for everyone, and that all I need to do is put my mind where my heart is and the rest comes easy. —Aliana Tejeda, 17, New Jersey

I know that I can have a career with coding. I love seeing other girls of color who don’t mind using a Saturday like me to learn more about coding :) —Sofia

I never knew all of the hard work it takes to make a website. It’s nice to know how to do coding.—Asia Williams, 13, California

I would like to design a blog that lots of kids read. —Nicole Manning, 9, New York​

I’d like to build a machine that can read my mind. —Tsia

I built an app using an online application called Appery.io. I would like to build a video game using drawings I’ve created myself. —Mai Robinson, 13, California

I can build a computerized robot that programs by computer and sends information to the robot itself to make it move. —Alexandra Adams, 11, Georgia

I worked on a Health Heroes App about health foods for kids. Also, I worked on a self-esteem app for middle-school and teen girls. —Sasha

I would like to build a shoe app. The shoe app would be for when the up-and-coming shoes will be released and the price of the shoes. —Taylor Jack, 13, California

I built 3 apps, a cowbell that rings, a fortune teller and a whack-a-mouse game where a mouse is running around the kitchen. In an earlier class I made a website that was a guide for newspaper makers. —Calista

I learned how apps are made. Cool!! I have ideas for apps that I want to make :)—Sofia

I built apps, websites, and a game. I recently won the Oakland Hackathon and the app was about abuse. It had a sensor on the home page so that when you open the app, it goes to the voice modifier (sensor). And it would detect sounds of help, then if it heard anything, it would call the police. And if you didn’t answer in 7 seconds, the sensor would think that you were in a bad position, so it would call the police. I would love to build another app that would help me with my homework. —Kimora

I admire her tenacity for paving the way for young colored girls to have a chance in the technology field, and by also helping them along the way. —Aliana

I admire her persistence and determination. She made sure we all got our fair chance. —Janay Walker, 13, Georgia

The fact that she came up with this organization is a big deal. —Kimora

She has opened up many opportunities for me and other young girls. —Sasha

She tells us not only men can code, but women can too. —Taylor

I admire her courage and her style—it gives me the courage to strive in my life. —Alexandria 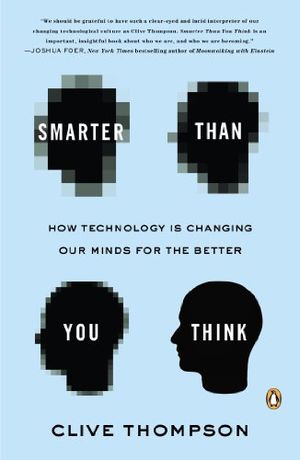 Smarter Than You Think: How Technology Is Changing Our Minds for the Better