The Salem witch trials occurred in colonial Massachusetts between 1692 and 1693. More than 200 people were accused of practicing witchcraft—the Devil's magic—and 20 were executed. Eventually, the colony admitted the trials were a mistake and compensated the families of those convicted. Since then, the story of the trials has become synonymous with paranoia and injustice, and it continues to beguile the popular imagination more than 300 years later.

Several centuries ago, many practicing Christians, and those of other religions, had a strong belief that the Devil could give certain people known as witches the power to harm others in return for their loyalty. A "witchcraft craze" rippled through Europe from the 1300s to the end of the 1600s. Tens of thousands of supposed witches—mostly women—were executed. Though the Salem trials came on just as the European craze was winding down, local circumstances explain their onset. 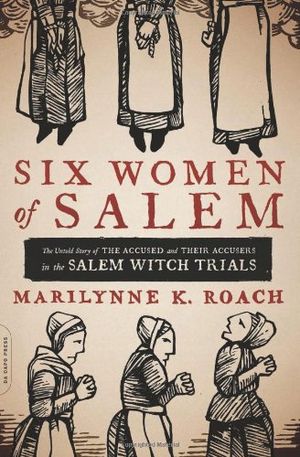 Six Women of Salem: The Untold Story of the Accused and Their Accusers in the Salem Witch Trials

Six Women of Salem is the first work to use the lives of a select number of representative women as a microcosm to illuminate the larger crisis of the Salem witch trials.

The displaced people created a strain on Salem's resources. This aggravated the existing rivalry between families with ties to the wealth of the port of Salem and those who still depended on agriculture. Controversy also brewed over Reverend Samuel Parris, who became Salem Village's first ordained minister in 1689, and was disliked because of his rigid ways and greedy nature. The Puritan villagers believed all the quarreling was the work of the Devil.

All three women were brought before the local magistrates and interrogated for several days, starting on March 1, 1692. Osborne claimed innocence, as did Good. But Tituba confessed, "The Devil came to me and bid me serve him." She described elaborate images of black dogs, red cats, yellow birds and a "black man" who wanted her to sign his book. She admitted that she signed the book and said there were several other witches looking to destroy the Puritans. All three women were put in jail.

With the seed of paranoia planted, a stream of accusations followed for the next few months. Charges against Martha Corey, a loyal member of the Church in Salem Village, greatly concerned the community; if she could be a witch, then anyone could. Magistrates even questioned Sarah Good's 4-year-old daughter, Dorothy, and her timid answers were construed as a confession. The questioning got more serious in April when Deputy Governor Thomas Danforth and his assistants attended the hearings. Dozens of people from Salem and other Massachusetts villages were brought in for questioning.

On May 27, 1692, Governor William Phipps ordered the establishment of a Special Court of Oyer (to hear) and Terminer (to decide) for Suffolk, Essex and Middlesex counties. The first case brought to the special court was Bridget Bishop, an older woman known for her gossipy habits and promiscuity. When asked if she committed witchcraft, Bishop responded, "I am as innocent as the child unborn." The defense must not have been convincing, because she was found guilty and, on June 10, became the first person hanged on what was later called Gallows Hill.

Five days later, respected minister Cotton Mather wrote a letter imploring the court not to allow spectral evidence—testimony about dreams and visions. The court largely ignored this request and five people were sentenced and hanged in July, five more in August and eight in September. On October 3, following in his son's footsteps, Increase Mather, then president of Harvard, denounced the use of spectral evidence: "It were better that ten suspected witches should escape than one innocent person be condemned."

Governor Phipps, in response to Mather's plea and his own wife being questioned for witchcraft, prohibited further arrests, released many accused witches and dissolved the Court of Oyer and Terminer on October 29. Phipps replaced it with a Superior Court of Judicature, which disallowed spectral evidence and only condemned 3 out of 56 defendants. Phipps eventually pardoned all who were in prison on witchcraft charges by May 1693. But the damage had been done: 19 were hanged on Gallows Hill, a 71-year-old man was pressed to death with heavy stones, several people died in jail and nearly 200 people, overall, had been accused of practicing "the Devil's magic."

Following the trials and executions, many involved, like judge Samuel Sewall, publicly confessed error and guilt. On January 14, 1697, the General Court ordered a day of fasting and soul-searching for the tragedy of Salem. In 1702, the court declared the trials unlawful. And in 1711, the colony passed a bill restoring the rights and good names of those accused and granted £600 restitution to their heirs. However, it was not until 1957—more than 250 years later—that Massachusetts formally apologized for the events of 1692.

In the 20th century, artists and scientists alike continued to be fascinated by the Salem witch trials. Playwright Arthur Miller resurrected the tale with his 1953 play The Crucible, using the trials as an allegory for the McCarthyism paranoia in the 1950s. Additionally, numerous hypotheses have been devised to explain the strange behavior that occurred in Salem in 1692. One of the most concrete studies, published in Science in 1976 by psychologist Linnda Caporael, blamed the abnormal habits of the accused on the fungus ergot, which can be found in rye, wheat and other cereal grasses. Toxicologists say that eating ergot-contaminated foods can lead to muscle spasms, vomiting, delusions and hallucinations. Also, the fungus thrives in warm and damp climates—not too unlike the swampy meadows in Salem Village, where rye was the staple grain during the spring and summer months.

In August 1992, to mark the 300th anniversary of the trials, Nobel Laureate Elie Wiesel dedicated the Witch Trials Memorial in Salem. Also in Salem, the Peabody Essex Museum houses the original court documents, and the town's most-visited attraction, the Salem Witch Museum, attests to the public's enthrallment with the 1692 hysteria.

Editor's note - October 27, 2011: Thanks to Professor Darin Hayton for pointing out an error in this article. While the exact number of supposed witches killed in Europe isn't known, the best estimate is closer to tens of thousands of victims, not hundreds of thousands. We have fixed the text to address this issue.