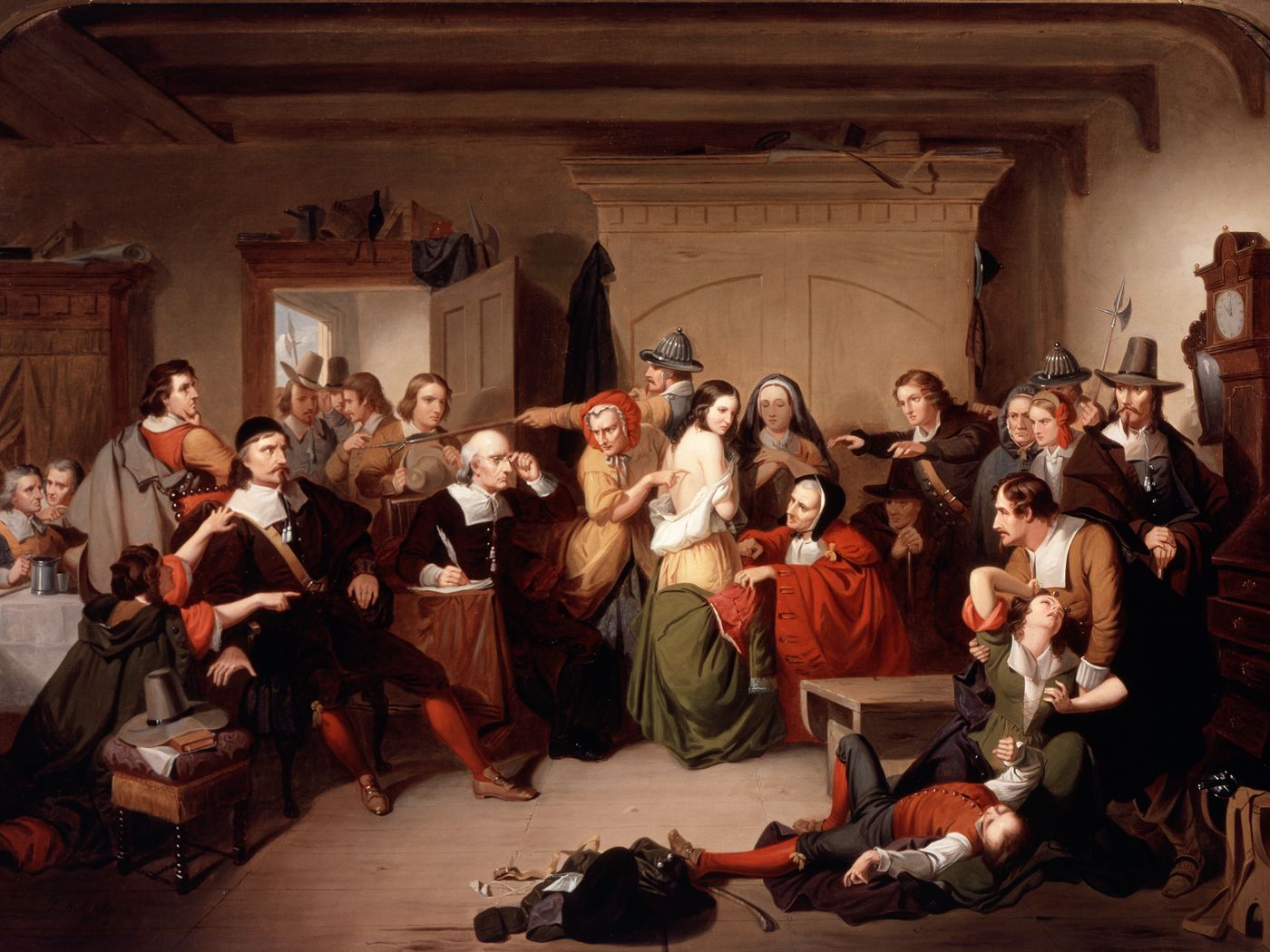 Tompkins Harrison Matteson, Examination of a Witch, 1853 Courtesy of the Peabody Essex Museum

Elizabeth How was around 56 years old when her neighbors accused her of practicing witchcraft in 1692.

“God knows I am innocent,” said How (also spelled Howe), who lived in colonial Massachusetts with her husband and their six children, during an examination. Her 94-year-old father-in-law, James How Sr., came to her aid, testifying that she had been a “Christian” wife to his son, James How Jr., who went blind at age 50: “Considering his want of eye sight [she] tenderly [led] him about by hand.”

These testimonies offer poignant evidence of one of the worst mass hysteria events in American history, the Salem Witch Trials. Residents of Salem and nearby towns accused more than 150 of their own of practicing “the Devil’s magic,” as Jess Blumberg wrote for Smithsonian magazine in 2007. Sham legal proceedings led to the deaths of 25 innocent people—including How, who was hanged for her “crimes” later that year, reports Pamela Reynolds for WBUR.

Thanks to an ongoing exhibition at the Peabody Essex Museum (PEM) in Salem, internet users can now explore a handful of transcribed records from the witch hunt—among them, files related to How’s case. Per a statement, the museum houses the world’s largest collection of Salem Witch Trials materials, including more than 500 documents from the Massachusetts Supreme Judicial Court.

On view through March 2022, “The Salem Witch Trials: Reckoning and Reclaiming” juxtaposes 17th-century artifacts with contemporary artists’ responses to the tragic event. Objects on display include a trunk that belonged to infamous judge Jonathan Corwin and a petition to a Boston court, signed by 32 longtime neighbors, asserting the innocence of Elizabeth and John Proctor. (Despite his neighbors’ pleas, John was executed by hanging in August 1692, while Elizabeth was found guilty but granted a stay of execution because she was pregnant. Arthur Miller’s 1953 play The Crucible dramatizes the couple’s story.)

The exhibition also seeks to contextualize the trials, which took place against the backdrop of smallpox outbreaks, threats from nearby Indigenous tribes and political instability, notes Katie White for Artnet News. Motivated by xenophobia and fear, people of all ages sought out scapegoats among their friends, family and neighbors. Many of the accused were outsiders in Salem’s rigid Puritan society before they were singled out as agents of the devil. Examples include Bridget Bishop, a “party girl apparently too fond of bright colors,” in the words of the New York Times’ Shane Mitchell, and Tituba, an enslaved Carib woman who was the first person to be accused.

“These accusations were grounded in fear,” co-curator Lydia Gordon tells the Times. “They were grounded in jealousy and land disputes and money. And it may look different, but this fear, and this needing to control mostly women, or people that fall outside of a heteronormative society? Well, we see this still today.”

The second part of the show takes a modern turn, exploring how descendants of the accused reckoned with the trauma that their ancestors endured. Legendary fashion designer Alexander McQueen, for instance, was a distant descendant of How.

After traveling to Salem and studying How’s trial testimony, McQueen was inspired to create a 2007 couture collection of sumptuous gowns titled “In Memory of Elizabeth How, Salem 1692.” Now on display at the museum, the designs favor dark colors—traditionally considered a violation of Puritan sumptuary laws because they required excessive amounts of dye—and Gothic elements. One formfitting velvet gown features theatrical references to witchcraft, including a high collar and a starburst of hand-sewn bugle sequins that functions as a “sartorial amulet,” per Artnet News.

Also included are 13 portraits of modern-day witches from photographer Frances F. Denny’s series Major Arcana: Portraits of Witches in America. Denny is a descendant of both Salem judge Samuel Sewall and Northampton resident Mary Bliss Parsons, who was accused of witchcraft but acquitted by a Boston court in 1675, reports the Times.

The artist spent three years photographing dozens of people who identify as witches, including those who practice as herbalists, tarot readers and medicine women.

“Witch’ is a word that has a lot of baggage,” Denny tells WBUR. “So, there’s something really poignant about the fact that these individuals have reclaimed it from these shadowy origins and turned it into something powerful.”

Outside of the art world, Salem’s sordid history continues to resonate in manifold ways. This August, a group of eighth-grade students proposed a piece of Massachusetts legislation clearing the name of Elizabeth Johnson Jr., a 22-year-old woman accused of witchcraft during the trials. Condemned to die but granted a reprieve before her execution, she’s the only Salem “witch” still in need of an official pardon, reports William J. Kole for the Associated Press (AP).

“It’s important to not forget that these tragedies didn’t happen that long ago,” Gordon tells the Times. “And so I think one of the things that the contemporary artists really put in this exhibition is a conversation of how we continue to use our voices to rise up against injustice.”

“The Salem Witch Trials: Reckoning and Reclaiming” is on view at the Peabody Essex Museum (PEM) in Salem, Massachusetts, through March 20, 2022.