As you drive around the American Prairie, a remote grassland region that is part of the Northern Great Plains in Montana, you might be struck by the herds of bison roaming the vast landscape. As night falls or day begins you may take pause to listen to the shriek of a coyote or the cry of a prairie dog colony in unison as a predator approaches the town. As you drive you will likely see groups of pronghorn sprinting across the dirt road and two different types of deer grazing on roadside vegetation. You might be lucky enough to see one of the many birds of prey that inhabit this area or a burrowing owl sitting atop an abandoned prairie dog hole it calls home. If one is to spend time in this region it is abundantly clear that the land is home to a diverse array of mammals and birds that demonstrate the biological importance of this biome. The story of the true ecological importance of this land however is less about what is seen, and more about what lies on and below the surface of this grassland area. When I decided to take an internship with the Smithsonian Conservation Biology Institute on the American Prairie , I too was enticed by the picturesque scenes of bison roaming the grasslands with a classic prairie sunset in the foreground. As someone who has lived on the East Coast for my whole life, I had only seen many of the animals previously mentioned in a captive setting. I fantasized about the prospect of seeing these creatures that are evocative of the spirit of the “Wild West” with my own eyes. It is no wonder why these animals are called “charismatic megafauna”, large species with symbolic value or widespread popular appeal. Little did I know I would learn to appreciate and love the “Charismatic Minifauna”, the insects that live in the shadow of the larger species of this region. The project I was selected to aid with pertained to studying the plants and insects on and around the American Prairie . Specifically, the project aimed to identify how grazing patterns of different mammals (bison, cattle, prairie dogs) impacted the abundance and diversity of plant and insect communities. Coming from a plant intensive background, I was apprehensive about studying insects. While I love bees and butterflies, typically, I am one to call in back-up if there is a spider or otherwise precarious looking insect in my room. I feared that this phobia may cause an issue with my work as I knew that this specific project was focused on studying Wolf spiders, Dung beetles, and grasshoppers. A typical day consisted of setting up or later collecting pitfall traps that were intended to capture Wolf spiders or baited to attract Dung beetles. Soon into the project we had collected countless cups filled to the brim with Dung beetles as well as a diverse range of other insects ranging from small beetles, ants, flies, and of course spiders. After collecting these cups, we then sorted them by hand into their respective categories. This step required me to come face to face with some of the insects that I had spent years fearing. I was apprehensive to say the least. However, as I dumped the contents of each cup onto a small petri dish and used a hand-held magnifying glass to identify each creature, I felt as if I began to know each one intimately. As the days went on, I began to look forward to seeing what might lie in each cup. Perhaps it would be an insect I hadn’t come across yet, perhaps it would be one that was not yet known to the scientific world. What I was most startled by was the immense diversity of life that we were collecting, day in and day out. Many scientists choose to study this region due to its observable biological diversity, but there was an unbelievable number of distinct organisms that most visitors may not even realize exist there. As the months went on, I began to notice these amazing organisms in their natural environments. I was able to see the funnel-like webs on the ground that were home to the Wolf spiders and the delicate nests built in the shallow imprint of a bison track by Orb-Weaver spiders. I saw the incredible camouflage ability of the Crab spider as it shrouded itself against the yellow backdrop of a sunflower waiting for prey. If I shone a light down an abandoned prairie dog hole, I often saw the distinct red-belly of a Black Widow building a nest. As I went on walks around the prairie, I noticed the interactions between the plants that I loved so much and the insects that I once feared. Hover flies spent their time on asters and sunflowers, Bee flies flew towards anything that resembled a flower, often finding their way to my blue water bottle as the weather got colder. Grasshoppers devoured every leaf of available vegetation until the plants could no longer be identified. Bumblebees bathed in the pollen of the ephemeral cactus flowers, taking advantage of the presence of resources in a region where flowers grow for such a short period of time. Over time, when I saw a spider out on the prairie or even in the corner of my room, I found myself less paralyzed by fear and more overtaken by wonder. I would go on walks, armed with my camera to take pictures of the plethora of insects, rather than wait in anticipation for the appearance of a bison or another large mammal. While I knew that my internship would mean being surrounded by immense amounts of biodiversity, I had only scratched the surface with the organisms I had anticipated seeing. I, like many other visitors to this area, had come for the charismatic megafauna, but in the end, it was the charismatic minifauna that won my heart. 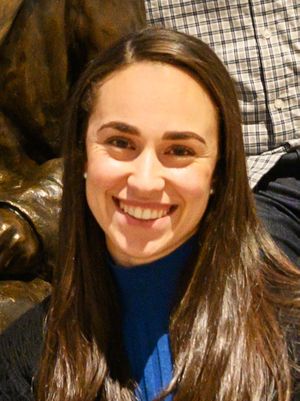 Julie Rebh completed an internship with the National Zoological Park (NZP) in 2022. She grew up in Eastern Pennsylvania and is passionate about all things environmental. Julie loves spending time outdoors in any way possible and especially likes seeing new places, hiking, and taking pictures.