My first research trip to the Smithsonian Tropical Research Institute (STRI) was in 2009. I arrived wide-eyed and eager to learn. Thirteen years later, with a PhD and a few (okay, many) wrinkles and gray hairs earned, I am still the forest’s humble student. I travelled to Panama with specific research goals but, in the process, I also learned about myself and how to navigate life.

I study the fungi that make tree seedlings ill. While we often think negatively of plant diseases in the context of agriculture, in a natural forest, disease-causing fungi (fungal pathogens) can promote overall health and diversity. They do this by preventing any single tree species from becoming overly abundant and hogging limited resources, like water, light, and space. An overly abundant tree species could lead to the loss of other tree species that have important roles in the ecosystem. A common hypothesis, originally put forth in the 1970s by Daniel Janzen and Joseph Connell, posits that host-specialized pathogens (in the strictest sense, only able to infect one tree species) increase in abundance as their host tree species increase. These specialized pathogens ultimately limit the population growth of their hosts and free up space for other tree species, thereby facilitating coexistence and maintaining plant community diversity.

When I started my research in Panama, I was of course aware of the Janzen-Connell hypothesis, but my original research project was seemingly unrelated. I wanted to explore whether there were areas in which seedlings were more likely to die from disease (wetter versus drier forests) and whether that could limit the geographic distributions of certain disease-susceptible tree species. This involved planting seeds of tree species from each of two environments (dry- and wet-forest tree species) into both environments (drier and wetter forests) and measuring pathogen-caused seedling death and damage. To be frank, I had not, but definitely should have, thought about the role of host specificity in this question. If the pathogens attacking seedlings are host-specific, tree species naturally inhabiting one environment should escape their specialist pathogens when artificially planted in the other environment and, because they would suddenly be released from disease risk, they should actually have higher survivorship when planted in the novel environment.

Consistent with my project’s overarching hypothesis, I found that seedlings were more likely to suffer disease in the wetter forest and that seedlings of dry-forest species were more likely to die when attacked by a pathogen, collectively suggesting that pathogens were restricting the geographic distributions of dry-forest tree species by excluding them from the wetter forest. Interestingly, the fact that dry-forest species suffered just as much or more pathogen-caused morality in the wetter forests, where they are absent or rare as adults, suggested that the pathogens attacking them were widespread generalists (able to infect multiple host species) that could not be escaped.

Forest Lesson 1: as summarized by the author Ann Pachet, “Never be so focused on what you're looking for that you overlook the thing you actually find.”

My interest in the pathogens piqued, I set out to identify the pathogens and describe their geographic distributions and host ranges (defined by the number of tree species a pathogen can infect and the evolutionary relatedness between those tree species). To do this, I first hiked forest trails across the Isthmus of Panama in search of seedlings with disease symptoms. In the lab, I cultured fungi from the diseased leaves, stems, and roots of 26 tree species (admittedly a tiny fraction of the over 800 tree species inhabiting the forests adjacent to the Panama Canal). Once I had fungi growing in the lab, the next step was to experimentally assess their pathogenicity because plants also harbor beneficial fungi and, following successful pathogen infection, there is secondary colonization by saprotrophic fungi that decompose dead material. In short, finding the killers is complicated and, between the heat, humidity, chiggers, ticks, mud, rain, early mornings in the forest, and late nights in the lab, I was regularly physically and emotionally exhausted.

Forest Lessons 2 and 3: You are stronger than you think, and even the hardest moments are dispelled by awe and beauty.

My results suggest that the fungi attacking seedlings are geographically widespread, found in both the wetter and drier forests, and that they are host generalists, able to attack tree species in a variety of families. In the context of the Janzen-Connell hypothesis, these generalist pathogens may contribute to the coexistence of various tree species by exerting specialist-like effects. For example, a generalist pathogen may cause severe disease, resulting in death or stunted growth, in one, or a few closely related tree species while only causing mild symptoms, like spots on their leaves, in other tree species. This would limit the population growth of the severely impacted tree species in the same way that a specialist would.

We are just beginning to understand the role disease-causing organisms play in tropical forests and several careers’ worth of unanswered questions remain. The irresistible urge to learn more about these pathogens continues to drive my research.

Forest Lesson 5: ignore the chiggers, ticks, and horrible smells coming from your field clothes and follow your bliss without reservation. 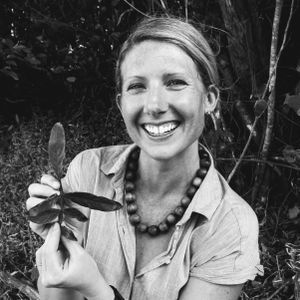 Erin R. Spear is a Staff Scientist at the Smithsonian Tropical Research Institute (STRI) in Panama, where she leads a Simons-Foundation-funded research program that intersects disease ecology (who gets sick from what, where, and why), mycology (the study of fungi), and community ecology (how different species and the environment interact to shape a community). Previously, she received a Ph.D. in Biology from the University of Utah. She conducted her dissertation research in Panama as a STRI Short-Term and Predoctoral Fellow. She continued exploring how pathogenic fungi influence plant communities and, in turn, how plants influence fungal communities in California and Panama as a postdoctoral researcher at Stanford University and at STRI.