The National Museum of American History houses the largest collection still in existence of images taken by pioneering photographer, Eadweard Muybridge for his revolutionary series of photographs entitled Animal Locomotion. These images capture humans, horses, dogs, and a menagerie of other animals preforming simple movements. Each plate in the final series comprises several individual frames each depicting a single fraction of the captured action that, until that point in history, had been imperceptible to the human eye. These frames, when viewed together, show the entirety of the movement. When shown in rapid succession as Muybridge did using a device of his own invention, the zoopraxiscope, the frames become the world’s first moving pictures. This series of photographs forever changed the way that humans thought about and were able to visualize and manipulate time and motion.

In the 1870s when Muybridge was working, most of photography was still being invented. New processes were being experimented with in a kind of alchemy undertaken by gentlemen photographers who tinkered with the methods of their predecessors to get a slightly sharper, slightly faster, slightly better image than what had been attainable before. Many of these experimental photographs from this period are composed of a silver emulsion on glass plates.

Glass is often thought of as a very stable, unchanging material. That, unless you drop it, it will be around forever. This, however, is far from the truth. Glass undergoes a unique and insidious type of degradation. It interacts with the humidity in the atmosphere, swapping out some of its own components for water, forming a brittle layer that most will recognize as the white scum that forms on glasses that have been run through the dishwasher a few too many times.

This degradation, referred to as glass alteration, happens slowly, taking decades if not centuries to be noticeable. For most glass, glass alteration doesn’t really matter – the object is likely to be dropped or lost before anyone notices a change. But for glass objects in museums, some of which have been around for millennia, and all of which are intended to last a lot longer, the slow time scale of alteration can become a problem.

I have had the opportunity to spend the last year analyzing the glass plate photographs from the Muybridge collection at the National Museum of American History while working as a post-doctoral researcher at the Museum Conservation Institute. These plates are complex composite objects that have been subjected to poor storage conditions and water exposure over the past 150 years. Beyond basic compositional identification, my investigations aimed to better understand the how and why behind the degraded condition of these objects.

The condition of these images varies immensely, with some plates nearly pristine while others have been so damaged by water exposure and fracture that the plates have been left entirely unreadable. With so much damage, it would initially seem that the glass might be the least of the concerns plaguing these objects. However, closer examination and analysis revealed that much of the deterioration that we can see on these plates is, in fact, linked directly to a relatively small amount of glass alteration. Long term preservation of these unique and important objects will rely not just on preservation of the image-containing gelatin layer, but on the effective preservation of the glass as well.

Glass is often an overlooked material in museum collections, but it is also perhaps the most ubiquitous. Glass is found on its own in vases, goblets and sculpture throughout the Smithsonian. It is also often a component of much larger items: the glass windshield on a Model T at the Postal Museum, the glass eyes of taxidermized critters at Natural History, or the innumerable, kaleidoscopic beads sewn onto a dress at the National Museum of the American Indian. Glass is also essential in the storage and preservation of the millions of biological specimens submerged in preserving fluids, each in its own glass vial in the collections at National Museum of Natural History. Glass is everywhere at the Smithsonian, and the more you look, the more you find.

Despite its prevalence, glass in the collection at the Smithsonian has never really been carefully examined. And, as the Muybridge plates indicate, even a small amount of alteration can have serious implications for the effective preservation of glass and glass-containing objects. The first step in addressing this problem is identifying the totality of the glass objects and containers at the Smithsonian and determining what condition these objects are in.

In the spring of 2020, I was invited to join the Smithsonian Glass Deterioration Working Group, an initiative focused on a pan-institutional survey of glass in the collections. Initiated by collection manager David Rosenthal and conservators Kim Cullen Cobb and Cathy Hawks of the National Museum of Natural History and supported by myself, along with Smithsonian Statistician Dr. Lee-Ann Hayek, conservator Robin O’Hern and museum technicians Andrew Ramsey and Evan Cooney, the working group is composed of over 90 collection preservation professionals from 25 Smithsonian departments and numerous external collaborators. This is a mammoth undertaking, funded by the Smithsonian National Collections Program, which will provide information essential for the ongoing care, conservation and preservation of our National Collection. Membership is open to anyone in the Smithsonian community who oversees glass, studies glass, or would like to learn more about glass in the collections. Like Muybridge’s images capturing motion, understanding the true and complete picture of glass at the Smithsonian requires taking a much more careful and detailed look than has even been done before. 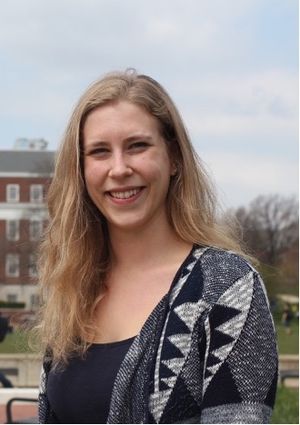 Dr. Miriam Hiebert received her Ph.D. in Materials Science and Engineering in 2019 from the University of Maryland. After graduation she worked as a post-doctoral Fellow at the Smithsonian’s Museum Conservation Institute where she carried out analysis of glass plate images from the Photographic History collection at the National Museum of American History. She is now working the National Museum Natural History of on the development and execution of a pan-institutional glass condition survey across the Smithsonian.