I have always been fascinated by color…the way it affects our perception of an object, the way it is created and the way it changes over time. The desire to apply color to a surface is intrinsic to human nature and humans have searched for natural sources of color since prehistoric times. They found out that some minerals could be ground to obtain a fine powder, and this was the origin of the mineral pigments. But they also found out that some plants and animals (insects and mollusks) could yield color when mixed with hot water, and this was the origin of natural dyes. Pigments are suitable to be applied on surfaces by mixing them with a binding medium. Dyes can be applied to fibers in several ways in a water solution. This discovery led to one of the most spectacular forms of art and craftsmanship: dyed textiles. Weavers and dyers have developed their skills over millennia to respond to their own creativity as well as to everyday life needs, and to adjust to the availability of local resources, the introduction of new materials, market requests and fashion.

The invention of synthetic dyes

Natural dyes represented the most common way to color textiles until the 19th century, when scientific progress showed that color was intrinsically related to the structure of molecules. Driven by the desire to chemically synthesize natural dye molecules, and therefore create color in the lab, scientists embarked on a journey that led to the discovery of synthetic dyes.

Some early successes were obtained during the 18th century, but a fundamental change occurred in 1856, when William Perkin accidentally synthesized the colored molecule mauveine (or aniline purple). It was the beginning of aniline dyes. After mauveine, the number of synthetic dyes quickly increased in a quest for relatively stable, lightfast and washfast formulations. By the end of the 19th century, more than 400 dyes were patented and these are commonly referred to as early synthetic dyes. The invention of new molecules accompanied and partially drove the industrial revolution throughout the first quarter of the 20th century.

It is unfair to say that the synthetic dyes completely replaced the natural dyes, as there is evidence that traditional methods using natural dyes kept being applied and are still in use today. Nevertheless, synthetic dyes had numerous advantages over natural dyes. In addition to being cheap, they were easy and quick to use, and allowed dyers to have an infinite range of shades, difficult to obtain with natural dyes. Particular colors, such as purple, green and orange, could be directly obtained, whereas these colors are usually created by mixing (often over-dyeing) different natural dyes, for example red and yellow for orange, red and blue for purple, yellow and blue for green. The toxicity of synthetic dyes was mostly neglected in these early years and the textile market was almost completely ruled by this new invention.

As market competition increased and the progress in synthesis advanced, synthetic dyes were commercialized using different names in different European countries. This created an extremely complicated scenario and the number of synthetic dyes kept growing exponentially during the first decades of the 20th century.

The global textile production of the second half of the 19th century was inevitably affected by the invention of synthetic dyes, which were rapidly commercialized and exported from Europe and America to all other continents. The textiles created in these years represent a useful source of information, as they show how and when the transition from natural to synthetic dyes occurred in various geographical areas. Nevertheless, the exact production date of historic textiles is often difficult to reconstruct and this is the case of many museum textile collections, including the one I studied during my Smithsonian Institution Fellowship.

My project focuses on a collection of 76 19th-century ikat textiles in the Arthur M. Sackler Gallery and donated by collector Dr Guido Goldman between 2004 and 2007. Some featured in the exhibition “To Dye For: Ikats from Central Asia” (March 24–July 29, 2018) and they are all described in the catalogue “Ikat: Silks of Central Asia, The Guido Goldman Collection”, edited by edited by Kate Fitz Gibbon and Andrew Hale and published in 1997 by Lawrence King Publishing (London). The word ikat comes from the Malaysian word mengikat, meaning “to tie”, and ikat textiles are traditionally produced in a very special way in several parts of the world, including Central and Southeast Asia, some Middle Eastern and African regions, Central and South America, India and Japan. In the ikat-making process, bundles of threads are repeatedly bound with a resist material (usually greased cotton) and dyed, in order to fix the color only in the areas left exposed. Unlike most textiles, for which the design is created during weaving, ikat designs are created in the yarns, which makes the process very difficult and time-consuming. The weaving is carefully carried out at the end of the process, after stretching the dyed threads on a loom in the correct order. The signature feature of ikat patterns is the typical “blurriness” or “feather-like” effect, which results from the color in the dye bath bleeding under the resist material and the slight movement of threads caused by the strains imposed by the weaving process.

The ikats in the Goldman collection are all from Central Asia, and Goldman’s intention was to only buy traditionally-made and relatively old ikats, but the main issue with these objects is the lack of information about their exact production date and provenance. In fact, these pieces came to the collector through art dealers, and, even when the acquisition place was recorded, the pieces may still have been made and worn elsewhere, before going on the market. Dating is even more problematic and is often based on stylistic interpretation. This scenario is shared by countless collections of museum textiles.

When I started my project, Goldman’s ikats were all attributed to the 19th century, supposedly spanning from the beginning to the end of the century, mostly based on stylistic interpretation. For most, the geographical provenance was Uzbekistan. In some cases, they were more precisely related to Bukhara, Samarkand or the Ferghana valley, whereas in other cases a general Central Asian provenance was ascribed. But are there ways to refine this information by using science? The answer is yes and dyes are one of the first clues.

The power of dye analysis

Dye identification provides information that goes well beyond the simple understanding of the manufacturing materials of a textile. In fact, the combination of field work, study of historical texts and scientific analysis has shown that specific types of natural dyes were historically used only in certain geographical areas, and in some cases before or after a certain date. The information is even more precise for synthetic dyes, as their first synthesis is often documented. Therefore, the detection of synthetic dyes in any of the ikats of the Goldman collection would have allowed us to use the information as a dating tool and at least establish the year after which the textiles were produced.

Nevertheless, dye analysis is not simple, as each dye is usually a complex mixture of molecules that have to be precisely identified in order to assess the botanical, animal or synthetic origin of the dye. We therefore decided to use a sophisticated analytical method called high pressure liquid chromatography coupled to diode array detector and mass spectrometry (HPLC-DAD-MS), which briefly enables all the molecules in a dye mixture to be separated and identified singularly. We applied the method to about 100 samples from 26 ikats and we were able to identify the sources of natural dyes used to produce the textiles. For red, cochineal, madder and lac dye; for yellow, larkspur, pagoda tree flower buds and grape vine leaves; for blue, indigo. Tannins were used to adjust the shade of the red colors. These dyes were traditionally used in Central Asia, confirming the geographical provenance of these textiles. But most importantly, 9 of the 26 textiles were found to contain synthetic dyes, such as fuchsine, methyl violet, malachite green and rhodamine B, which were synthesized in 1856, 1861, 1877 and 1887 respectively. This information allowed us to adjust the dating of these 9 textiles, mostly to a later period compared to the stylistic interpretation.

The results of the investigation are now published in the international open-access peer-reviewed scientific journal Heritage Science. Go ahead and have a look if you want to know more about the implications of these results. Additional research is underway to investigate more ikats from the collection and to further clarify some dye identifications and trends in the results. I am excited to start with this second part of the project and discover more about these fascinating textiles. 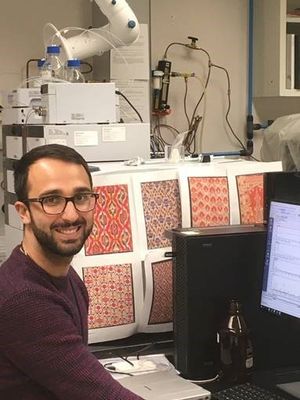 Diego Tamburini is an analytical chemist by training and obtained his PhD in Chemistry and Materials Science from the University of Pisa in 2015. He specialized in the use of chromatographic and mass spectrometric techniques for the characterization of organic materials. In particular, his PhD work was mostly related to the application of analytical pyrolysis (Py-GC-MS) to the investigation of archaeological wood and Asian lacquers. He then joined the Scientific Department of the British Museum (London, UK) in 2016 with a three-year Andrew W. Mellon Postdoctoral Fellowship focusing on the application of liquid chromatography tandem mass spectrometry to the identification of natural dyes in historical and archaeological textiles. His main project focused on the palette of Asian dyes used in the Dunhuang textiles. Diego is now a Postdoctoral Fellow in the Department of Conservation and Scientific Research of the Freer Gallery of Art and Arthur M. Sackler Gallery, National Museum of Asian Art. His project, titled “Exploring the transition from natural to synthetic dyes in the production of 19th-century ikat textiles from Central Asia”, focuses on the dye analysis of the ikat textiles present in the Guido Goldman collection of the Arthur M. Sackler Gallery, with the main aim to obtain more information about the date and provenance of these textiles.