The spectacular biodiversity of the northern Pacific region of South America has drawn our attention since early botanical expeditions to the tropics conducted by European naturalists mostly during the 19th and 20th centuries. The Chocó region in northwestern Colombia, one of the rainiest places on Earth with a mean annual rainfall exceeding 10000 mm (1) is a remarkable example, which is home to an incredibly biodiverse tropical forest with ca. 3% and 6% of all known species of plants and vertebrates, respectively (2). However, a protracted history of social conflicts and sociopolitical isolation, dating back to the Spanish colonial period, has plagued the local afro and indigenous communities. As a result, our ability to carry out scientific research in this astounding region has been hindered, and in consequence, our knowledge on the evolution of this biodiversity hotspot and its hosting landscape is still limited.

While it is widely accepted that there is a close relationship between mountains’ growth and biodiversity, particularly in the tropics, the uplift history—gain in elevation relative to a reference surface such as the mean sea level—and the evolution of topography is often oversimplified and barely understood. In fact, how mountains are formed is a long-standing question that has drawn the attention of geologists, who agree that the search for its answer requires multidisciplinary approaches. Truly understanding the landscape requires knowledge of the complicated interactions between in-depth tectonic and geomorphological and climate-driven processes such as erosion.

As a geologist, I am mostly interested in the natural wonders “hidden” below the exuberant biodiversity of the Chocó region, which are preserved in the compositional, morphological and textural features of rocks. During my fellowship at the Smithsonian Tropical Research Institute, I have been conducting fieldwork along the northernmost Pacific coast of Colombia (Chocó region), where volcanic and sedimentary rocks, formed during the last ~80 million years, are exposed. I aim to understand how and when the present-day landscape was formed, and how it evolved through the last ca. 23 million years. I expect to be able to reconstruct ancient landscape configurations and their evolution through time by studying the composition and spatiotemporal arrangement (i.e. stratigraphy) of Neogene (~23-3 Ma) sedimentary rocks. This is possible because both the compositional features (i.e. provenance) and the stratigraphy of sedimentary rocks strongly depend on the nature of the mountainous areas where sediments are derived from. They also depend on the physiographic characteristics of the region through which the sediments are transported (e.g. surface steepness, topographic ruggedness) and where they finally accumulate—sedimentary basins—either on marine or terrestrial settings.

For instance, the uplift of formerly flat-lying areas would: a) increase the relief and produce steeper slopes, which may result in higher energy and shorter fluvial systems (i.e. rivers) capable of transporting coarser sediments, and b) potentially incorporate previously absent materials from newly uplifted (source) areas. Thus, the signal of such landscape modification in the stratigraphic and provenance record, would be represented by a transition towards coarser and less rounded (abraded) sedimentary materials (i.e. shorter stay and limited abrasion within the fluvial system), together with a compositional change (e.g. appearance of a formerly absent mineral or set of minerals). As the age of rocks (geochronology) could be determined by their fossil content or through radiometric dating based on the radioactive decay of certain isotopes (e.g. 238U), we are therefore able to determine when the landscape perturbation likely occurred.

Once the potential occurrence of changes in the accumulation settings of sedimentary rocks have been recognized and dated from the stratigraphic and provenance record, we may explore for the potential triggering mechanisms, which may be related to tectonic and/or climate phenomena.

This is what I am mostly interested in, understanding how plate tectonics shape the long-term evolution of landscape. My ongoing research, has allowed suggesting that the Chocó region has been dominated by uplift at least during the last ca. 15 million years, which caused a switch of accumulation settings of sedimentary rocks from deep marine towards terrestrial conditions, and the emergence of the up to 1000 meters-high coastal Baudó Range.

Such uplift has been likely triggered by the compressive tectonic forcing attributed to the convergence between the Nazca (oceanic) and South-American (continental) tectonic plates. Since the Nazca oceanic plate is denser, it sinks (subducts) beneath the South-American continent, which produces a lot of friction that is finally transferred upward, causing uplift and deformation (i.e. folding and fracturing of rocks), and subsequent changes in the landscape.

The relative motion of tectonic plates and therefore the angle and velocity of convergence between them, as well as the sinking (subduction) angle are highly dynamic and fluctuates through time. In consequence, the intensity and spatial distribution of uplift and deformation, and subsequently the stratigraphic and compositional features of rocks are modified. During the next stages of my ongoing research, I expect to recognize the potential imprint that changes in the convergence system between the Nazca and South-American plates would have had in the landscape evolution of the northern Pacific region of Colombia. In a broader perspective, I expect to better understand how tectonic plates work and how they shape the growing of mountains, which in turn seems to play a major role in shaping global biodiversity. 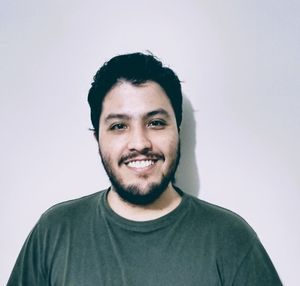 Santiago León is a predoctoral fellow at the Smithsonian Tropical Research Institue in Panama, where he is conducting the project entitled "Evaluation of the magmatic and stratigraphic record of a changing convergent margin: Neogene evolution of northwestern Colombia an eastern Panama". His research focuses on the tectonic mechanisms involved in the construction of mountain chains such as the Colombian Andes, by combining geochemical, geochronological and stratigraphic methods. Santiago is currently a PhD candidate from the National University of Colombia, where he graduated as Geologist Engineer, and holds a MSc. in Geochemistry and Geotectonics from the University of Sao Paulo, Brazil.