No one would ever imagine that digging up 50 cm into the ground could be a difficult task; it surely does not sound as impressive as climbing a 50 m tree in South American jungles or going into the depth of the ocean looking for secretive marine creatures. But I can assure you that it is somehow adventurous when you are looking for colonies of the ant Ectatomma ruidum – particularly when you are trying to collect the whole colony. It is even harder if you consider doing this in the middle of a rainforest with potentially thousands of chiggers and ticks on the forest floor waiting to climb on your body (add also nematodes worms if you are very unlucky), particularly when you are struggling to reach the bottom of the hole that you just shoveled. At this point, your chest is pressing against the ground trying to find the ants that are mixed with soil and pebbles. Well, if you do it this way you will probably end up with many of the creatures, that I mentioned earlier, all over your body. That was almost exactly what happened to me when I first tried to collect these ants in the middle of the forest in Pipeline Road in the canal zone in Panama. This unfortunate adventure made me reconsider my approach to collecting these ants and I learned that placing a plastic mat on the ground sprayed with repellent was the perfect solution.

It is funny how during our first steps in this world of research, we tropical biologists often wish to work with a rare glamorous species (e.g. jaguar, harpy eagle), or at least that was the case for me and most of the students I met during my undergraduate studies. We almost never became excited about fairly common species and that taste for common species often requires some experience to develop it. Ectatomma ruidum is in fact one of those fairly common species, which is a good thing because it means lots of replicates for experimentation, an important component in science. Moreover, you can take the ants to the lab where you can keep them in boxes. Oftentimes, myrmecologists (scientists working on ants) need to coat the walls of the plastic boxes with a white liquid called fluon to avoid ants from escaping. This is not needed for E. ruidum which is unable to climb the walls of the boxes (at least the ones I use) and it saves you some time from this coating labor.

Why this ant? You may ask, what is special about it? An interesting feature of this ground-nesting species is the ability to inhabit undisturbed and disturbed environments in the neotropics; therefore, it is a great system to compare populations in very contrasting environments. The comparison I am making is whether colonies of these two environments differ in their resistance to certain fungal pathogens. The idea comes from the fact that the loss of vegetation induces a decline in the abundance and diversity of these fungi in the soil. Given enough time (several generations later), in disturbed environments (cities, cattle pastures), these ants would not need to invest so much in defenses against these fungi. If that is the case, then they should be more susceptible to infection by these fungi (experimentally in the lab) as compared to ants from undisturbed forest that are constantly under attack by these pathogens. Potentially, other factors may be responsible; for instance, differences in abiotic conditions (non-living chemical and physical parts of the environment) or genetic diversity, which I am also trying to investigate. I have found some trends in line with my prediction, but it is still too early to tell (I need more replicates) and the lockdown has complicated the work.

Going back to the topic of collecting the colonies in the field, when we dig up a nest (with the help of Eleodoro Bonilla, a Biology student from the University of Panama), we try to collect the whole colony, including the queen. In theory, this means that you could keep the colony in the laboratory for as long as the queen lives. Ant queens usually live longer than the workers, with some extraordinary cases reported in the literature of queens living a maximum lifespan between 19 and almost 29 years in the laboratory (depending of the species). For E. ruidum, there is published data for a queen living almost 9 years in the laboratory (they probably live a lot less in the wild). Certainly, a striking feature of ant queens in general.

For this reason, we are often frustrated when we don’t find the queen after a long time of digging and searching in the dirt. In fact, the disappointment arrived 61 times out of 107 colonies collected in the field (total count before the COVID lockdown) and one of those letdowns was the result of accidentally killing the queen with the coa while digging (a Panamanian tool for gardening, I am holding one in the picture). This takes me to another interesting detail about Ectatomma ruidum colonies -- you may find more than one queen per colony and possibly all of them are contributing to the production of eggs. In fact, this feature is not so rare in the ant world, but one queen per colony is more common.

One of the questions that I am often asked about E. ruidum from people that are not familiar with the species or ants in general is: does it sting? I would normally just answer no, but this is not completely true. The stinger can get you sometimes when you are holding it with your fingers and how much pain you feel will probably depend of the pain threshold of the person. I can remember one time when I was 6 years old that I got stung by one – a slightly unpleasant feeling in the tip of the finger (yes, I already knew this ant back then! But I didn’t know the name). This finally takes me to talk about the common name issue of this ant; you may have noticed that I haven’t used a common name for this ant throughout the text. That is because it does not have one. The ‘fairly commonness’ of the species and its non-impressive size has not awarded it a common name (as most ant species), which differs from the more famous ants that possess prominent features. A few examples include the bullet ant (Paraponera clavata) with an impressive size and painful sting; leaf-cutting ants (several genera) carrying thousands of pieces of leaves along the forest floor or perhaps weaving ants in the tropics of the Old World that build their nest using silk.

For ants with less striking qualities like E. ruidum, it requires some research to discover some of their wonders: several mutualisms with plants and insects (the insect or plant provides food and the ant offers protection), seed dispersal (another form of mutualism) and contribution to the cycling of nutrients in the forest are a few examples. Specifically, the species has been used extensively in studies of behavior, physiology, ecology and evolution. As an award for its contributions in the advancement of science, I believe that this species deserves a common name, and I dare to propose ‘Neotropical Blackish Ant’, referencing its distribution and variation in coloration (a gradient from black to reddish).

From my side, I will keep my eyes open, through research, to see what other surprises are awaiting to be discovered in this ant. 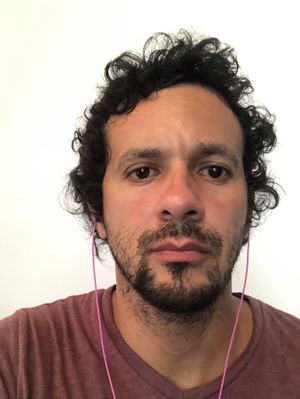 Dumas Gálvez studied Biology with a focus in Animal Biology from the University in Panama in 2005. During this time, Dumas was involved with the Smithsonian Tropical Research Institute in Panama, where he worked with plants and agouties as an intern and research assistant. Later on, he went to The Netherlands in 2009, where he completed a masters in Ecology and Evolution from the University of Groningen. Dumas’ master’s thesis was on behavior of agouties related to seed dispersal in Barro Colorado Island in Panama (2008). In 2014, Dumas finished a doctorate in Ecology and Evolution at the University of Lausanne (Switzerland), working on ants and their interaction with pathogens. After, 9 years in Europe, he came back to Panama in 2016, working as an adjunct researcher at INDICASAT AIP and special professor at the Entomology Master Program at the University of Panama. In 2019, Dumas started a postdoctoral fellowship at the Smithsonian Tropical Research Institute with the project titled ‘Environmental disturbance and its effect on the immune competence of an insect’. Dumas also received an extension for one year through the Secretary Distinguished Fellowship from the Smithsonian Institution in Washington.

Can Virtual Internships Help Protect Vulnerable Collections at the Smithsonian?