Many stories told about Alma Thomas begin when she was 75 years old. If we look further back, what insights might we learn?

We would first discover that Thomas was part of the Great Migration. She was born into a middle-class African American family in Columbus, GA in 1891. Her family left their garden-ringed house in 1907, a year after the Atlanta Massacre. They moved to Washington, D.C., where there was a strong Black middle class as well as access to higher education but de facto segregation was still common.

As a student in D.C., Thomas excelled in math and architectural drawing. Later, she attended Howard University (Fine Arts, 1924) and Columbia University Teacher's College (1934). While working as a full-time art teacher, Thomas attended American University where she studied painting from 1952–1957.

Throughout her adulthood, Thomas contributed to the Black community through the arts and advocacy. In 1936, Thomas founded a club for her predominantly Black students at Shaw Junior High School. They met on Saturdays to explore art and visit museums. Later, Thomas shaped D.C.’s art scene by assisting with the purchase of the townhome that would become one of the first Black-owned galleries in the U.S., where the work of artists of all races was exhibited side-by-side. At 71, she marched side-by-side with other members of the Civil Rights Movement at the March on Washington.

Use a Wide-Angle Lens

What might we discover if we took a wider view, beyond the artist's canvas? Thomas found inspiration through music, nature, science, and the changing circumstances in her life. For example, Thomas listened to a wide assortment of music and even titled her works in musical styles as wide-ranging as chants, concertos, and rock and roll.

She blended this interest with inspiration from the natural world around her. Take her 1976 Red Azaleas Singing and Dancing Rock and Roll Music, for example. She trained herself to see familiar plants, like the holly tree outside her home studio, anew: “There are six patterns in there right now that I can see. And every morning... the wind has given me new colors through the windowpanes.”

Science also sparked Thomas’s creativity. Between 1968 and 1972, NASA conducted 11 space flights and two moon landings. Thomas created at least 14 known paintings inspired by these feats. “I was born at the end of the 19th century, horse-and-buggy days, and experienced the phenomenal changes of the 20th century machine and space age...” Thomas said in a 1972 artist statement. “These phenomena set my creativity in motion.”

Like the scientists she admired, Thomas also had to problem-solve and innovate. As a petite elder with arthritis, she needed assistance to stand, her arms ached, and her fingers were gnarled. She wanted, however, to paint on big canvases. So, she changed her studio practice and painting style to meet her needs.

After getting help to purchase supplies and stretch canvases, Thomas wedged herself between two tables for support. She laid a canvas in front of herself and rotated it to reach all sides. The style she’s best known for (“Alma’s Stripes”) evolved as her arthritis progressed. When applying pats of color became painful, she used arcs and irregular shapes instead.

Use a Microscope (or Infrared Reflectography!)

Art conservation is a multidisciplinary field using art, history, and science to preserve artworks for the future. Conservators collaborate with curators, scholars, and scientists to study works of art closely before planning any treatment. This analysis allows them to learn more about an artwork’s creation, giving us insight into the artist’s process. What can their tools and expertise add to our understanding?

The conservators at the Lunder Conservation Center studied Thomas’s (30!) paintings in the collection using full format and high-resolution digital cameras. These cameras have been modified, allowing us to photograph the painting using a broader spectrum than the human eye can see.

When we looked at Snoopy—Early Sun Display using an infrared filter to see through the paint layer, we detected Thomas’s carefully prepared underdrawing that guided her individual color stripes, and an annotation for a desired stripe of yellow. She abandoned this pencil underdrawing in her later works, likely due to the physical stress and pain of holding a pencil. Instead, Thomas guided her paint strokes using a long elastic band, moved along to align with small marks she made on the canvas. Eventually even this technique became painful, so she loosened her technique even further, painting in the comma and glyph-like forms seen in Red Azaleas Singing and Dancing Rock and Roll.

Due to her curiosity and resolve, Thomas was the first Black woman artist to have a solo exhibition at the Whitney Museum of American Art in 1971. In 1972, she reflected: “One of the things we couldn’t do was go into museums, let alone think of hanging our pictures there. Look at me now.”

If you want to know more about Thomas, check out this comic and blog post or watch a recording of a recent teacher workshop. Invite your students to look at Thomas’s work and share their thoughts. To stay updated on a Fall 2022 summit of interdisciplinary experts weighing in on Thomas’s work, sign up for SAAM’s “Teacher Resources” newsletter.

The Smithsonian American Art Museum (SAAM) is celebrating with an exhibition in 2023. Check it out in-person and online. 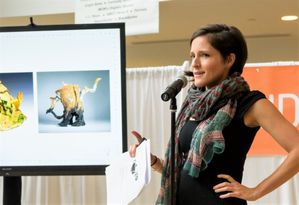 Elizabeth Dale-Deines is Teacher Programs Coordinator at the Smithsonian American Art Museum and Renwick Gallery. She collaborates with DC-area schools and cultural organizations to incorporate interdisciplinary thinking and student-driven learning into established curriculum. With a background in virtual education, she seeks to serve all learners equitably during this period of global crisis. 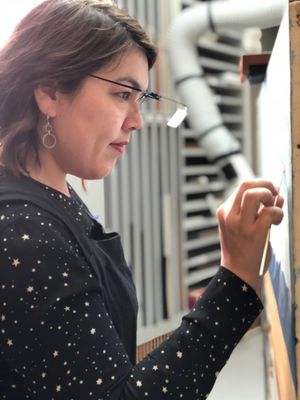 Gwen Manthey is Paintings Conservator the Smithsonian American Art Museum in the Lunder Conservation Center. Her interests lie in practical treatment, technical imaging, and material analysis. She has published on the works of Richard Caton Woodville, Alma Thomas, and is researching alternative solid supports used in America.