A short notice in The Rhode Island American newspaper of 7 July 1812 announced that at the Providence Theatre on the following night, a “Grand Panorama View of the town of Providence” would be revealed. This was a monumental 15 x 24 ft. drop scene or theater curtain, painted by the Boston scene painter John Worrall (ca1785-1825), showing in bold colors almost 200 homes, businesses and churches of the flourishing city. The drop scene panorama was a great success with the local citizens, and was displayed two or three times a season for the next few years as a special attraction between plays, before transitioning to use as a traditional drop scene, until the theater closed in 1832.

The Rhode Island Historical Society (RIHS), a Smithsonian Affiliate, has recently completed a unique hybrid restoration of the drop scene, a prized work in its collection since 1833, and the earliest known surviving work of American theater scenery. The curtain has suffered much paint loss over the years, and some minor traditional restoration took place in the early 1980s and again in 2018, however the damaged and fragile state of the object, as well as its very large size, meant that more physical restoration would have been too invasive and costly. Working with a photographer who specializes in the digital restoration of art, and a painter trained in theater scene painting, the RIHS developed a unique plan to recreate how this work looked in the early nineteenth century. Through generous funding from the Gladys Krieble Delmas Foundation, the Herman H. Rose Civic, Cultural and Media Access Fund (RI Foundation), and by Sylvia Brown through the Hope Foundation (Providence, RI), the hybrid digital restoration project was able to begin.

The curtain was photographed in 78 sections, and photo-editing software used to retouch damaged areas as much as possible. This was done in multiple layers which allowed the texture and feel of the original work, which is water-based paint on sailcloth or canvas, to be preserved while missing detail and colors were digitally replaced on other layers. Large-scale archival reproduction prints were made of sections that were too damaged or indistinct to be retouched using photo-editing, and the painter then worked on those prints. Using brushwork, shading and a traditional artist’s skills, as well as studying details in the large images to learn as much about the paints and pigments Worrall used, the painter was able to match the style of the original as closely as possible. Finally, these over-painted prints were photographed and the digital files joined together, creating one large image of the drop scene as it would have appeared originally. This digital image is only an interpretation—the original work remains untouched—so if new information or research shows that changes should be made to color choices or certain details for example, then this can easily be done at any time on the digital file.

The RIHS plans to create an interactive website for the drop scene project and the study of this renovated work, allowing scholars and the public to investigate Providence of the Early National Period; its architecture, residents, businesses, theater and more. Also, the RIHS is eager for other institutions to learn about the possibilities of this hybrid restoration approach, for the conservation of large or fragile works, tapestries, banners, decorative hangings and murals. It provides the benefits of digital access to a significant work, while also taking a thoughtful approach to the balance between restoration and the integrity of the original object. 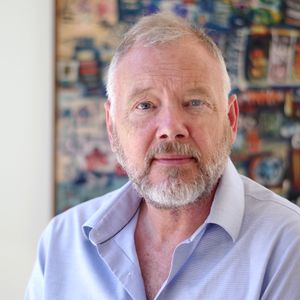 Francis Frost is an independent scholar with over twenty-five years experience researching and studying American art of the nineteenth and twentieth centuries. He has been involved with the Rhode Island Historical Society’s drop scene restoration project for almost two years, assisting with fundraising for the digital restoration and researching the history of the drop scene.