If you're from the Midwest or Eastern seaboard of the United States, duck sauce is likely an orange jelly-like substance—similar to sweet-and-sour sauce but with a fruitier flavor—that comes in packets with your Chinese takeout. It's typically used for dipping crispy noodles, egg rolls, and other fried foods. For most New Englanders, duck sauce is a brownish, sweet and chunky sauce served on the table in Chinese restaurants. And if you're from someplace like San Diego or a San Francisco Bay Area native, chances are you've never even heard the name.

The argument over what constitutes duck sauce runs deep. On their website Grammarphobia.com, authors Patricia T. O'Connor and Stewart Kellerman debunk myths and uncover truths on English grammar, etymology, and usage. They believe the use of the name 'duck sauce' for those packets of orange-colored jelly is an American brainchild, along with the sauce itself.

A Google search for 'duck sauce' turns up Wikipedia users wanting to combine the website's 'duck sauce' entry with 'plum sauce.' Some say they're one and the same or, at the very least, that plum sauce is the basis for duck sauce, which also incorporates apricots (and sometimes peaches). Others beg to differ. On foodie message boards you'll come across former Bostonians bemoaning the existence of those orange-filled packets, and West Coast transplants frantically searching for a suitable substitute for the sauce they once had at home.

Where the 'duck sauce' name originated is somewhat murky, though O’Connor and Kellerman do believe that it was originally served with duck. Unlike chow mein or General Tso’s Chicken, American inventions that have no place on a traditional Chinese food menu,  Peking duck—a crispy skinned, roasted duck flavored with herbs—has been a staple in China for hundreds of years and usually (though not always) comes with a sauce made from wheat flour and soybeans for dipping. Since soybeans aren't native to the United States, there is a theory among some people that when Chinese immigrants first established restaurants targeted to American palates, they created a sweeter, friendlier substitute using apricots (or in New England's case, applesauce and molasses) and for obvious reasons called it duck sauce.

To understand the regionalism of duck sauce in general it helps to look at a larger picture: American Chinese cuisine. “There are distinct east coast and west coast Peking Duck buns, so why not duck sauce?” says David R. Chan, a third-generation American and L.A. native who's eaten at more than 6,600 Chinese restaurants—most of them within the United States—which he has been chronicling at Chandavkl's Blog since 2009.

Chow mein is another dish that varies between coasts. Likely, these differences have to do with both Chinese immigration patterns as well as America's diverse regional culinary preferences. The country's first Chinese restaurants were limited to those areas where Chinese immigrants settled (or were forced to settle), namely the U.S. west coast and urban 'Chinatowns' nationwide, and were mostly Cantonese. Then in the 1960s the U.S. lifted nearly a century of restrictive immigration policies, allowing for an unprecedented number of Chinese emigrants from regions such as Szechuan and Hunan to relocate to America. Along with them they brought their own distinct flavors and recipes.

But still, why isn't 'duck sauce' of any kind a West Coast thing? Chan says he has seen duck sauce packets in California, but fairly infrequently. “Actually, in the old days I didn't see the packets [around the L.A. area] at all,” Chan says. “They seem to be a more recent development now, though still not that common.” When I originally emailed him about duck sauce, Chan instinctively thought I was talking about the reddish marmalade-looking condiment that comes alongside Peking Duck in many Cantonese restaurants. After all, it is the sauce that comes with duck. Though in most cases this is hoisin sauce, made of soy sauce, chilies, and garlic, maybe the 'duck sauce' name is simply implied.

Perhaps 'duck sauce' as a term never made it out west because the main purveyors of duck sauce packets—companies like W.Y Industries and Yi Pin Food Products—are based out of the New Jersey and New York area. These businesses were also formed in the 1970s and ’80s, when the West Coast's palate for Chinese food was already well established. A New York Times article from October 12, 1981, talks about New-York-based Saucy Susan Products, purveyor of a popular specialty duck sauce made with apricot and peaches, and its desire to tap into a larger market. According to the piece, “[Saucy Susan Products] has enlisted one of the big names in the agency business, Levine, Huntley, Schmidt, Plapler & Beaver (they do not come much bigger), to help it introduce its sauces on the West Coast as part of a three-year plan to go national.” Seems like Saucy Susan's dreams never quite came to fruition.

Ultimately, we may never know where the term 'duck sauce' comes from or why one person's packet of jelly-like sauce is another's plum-colored chutney. But for fans of any kind of duck sauce, it may be worth it to start stocking your own. 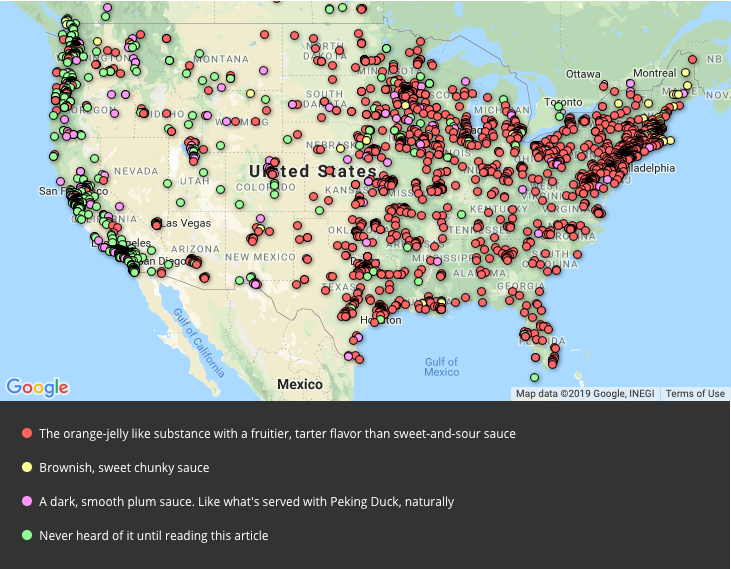