Ravenna had emerged as the center of the Western world by the time Placidia arrived in 416. “Ravenna attracted the best artists and architects from around the empire,” noted Claudia Frassineti, a cultural heritage specialist and guide in the city. “It was the new capital city, the focus of wealth and power.”

Emperor Honorius, Placidia’s half-brother, presided in a magnificent palace overlooking the Adriatic, surrounded by luxury villas for aristocrats, splendid churches and a stadium for horse races. The port turned into “an emporium,” Frassineti added, its warehouses bursting with goods from the Mediterranean and beyond.

Today, charming and sleepy Ravenna is often overlooked by travelers entranced by Rome, Venice and Florence. Even its geography has changed over the last 1,500 years. Its once-busy port has silted up, and the Adriatic coast receded; many of its majestic Roman-era structures have simply vanished and been replaced with modest avenues.

But in its back streets are gems of ancient art and architecture. Most astonishing is Placidia’s mosaic-covered private chapel, which has miraculously survived and is one of the most alluring artistic experiences in all of Italy: a UNESCO World Heritage site, it is still called the Mausoleum of Galla Placidia, even though she was never buried there.

Meanwhile, some 200 miles south in Rome, relics of Placidia’s era are scattered through the city—often in surprising places. The Anantara Palazzo Naiadi Hotel was built on part of the site of the Baths of Diocletian. With the capacity to hold 3,000 people, this magnificent complex thrived in Placidia’s age. Romans sat immersed in pools under its cathedral-like domes.

During the hotel’s construction, lovely mosaics from the baths’ exedra, or changing hall, had been unearthed, and they still exist today in the basement. The hotel’s guide, an archaeologist named Deborha Quaglieri, showed me the remains of the baths, protected beneath glass in the floor, including mosaics, lead pipes, a cistern and an octagonal fountain.

The Palatine palace complex is where Placidia grew up with every classical comfort. Today, the ruins have been stripped of their brilliant marble and jewels, but the grandiose arches form tunnels through fields of white flowers. Due to structural issues, some of the most spectacular corridors are off limits.

In eerie silence, I followed tunnels to a terrace overlooking the excavated outline of the Circus Maximus, where more than 100,000 spectators once roared during the chariot races. Later, in the Palazzo Massimo museum, I admired the magical frescoes of citrus-filled gardens that once adorned the chambers decorated by Livia, wife of Augustus.

Even more evocative are the surviving sections of the Aurelian Walls, a 12.5-mile ring of stone with 380 watchtowers and 12 gates. The 35-feet-high balustrades, previously adorned with marble, were stripped to bare brick in the Middle Ages, but many parts still loom around the historical center and suggest why the Visigoths decided to starve Romans into submission rather than attack them directly. One of its original gates, the Porta San Sebastiano, is now the Museum of the Walls, where I enjoyed sweeping views of the countryside.

Finding the Salarian Gate, where the Visigoths broke into the city, was a more difficult task. Within the busy Piazza Fiume, parts of the ancient walls remain, but the gate was severely damaged in 1870 during the Capture of Rome and subsequently knocked down. Still, I descended some stairs into the Minerva bookstore, which has operated for nearly a century underground, and found parts of the stone foundations.

A plaque marks the site, but the clerk seemed perplexed when I asked about the walls. He peered at them as if he had never noticed them before. “They did some excavation here once,” he shrugged. 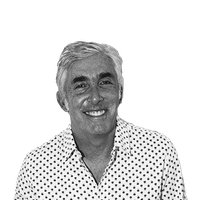