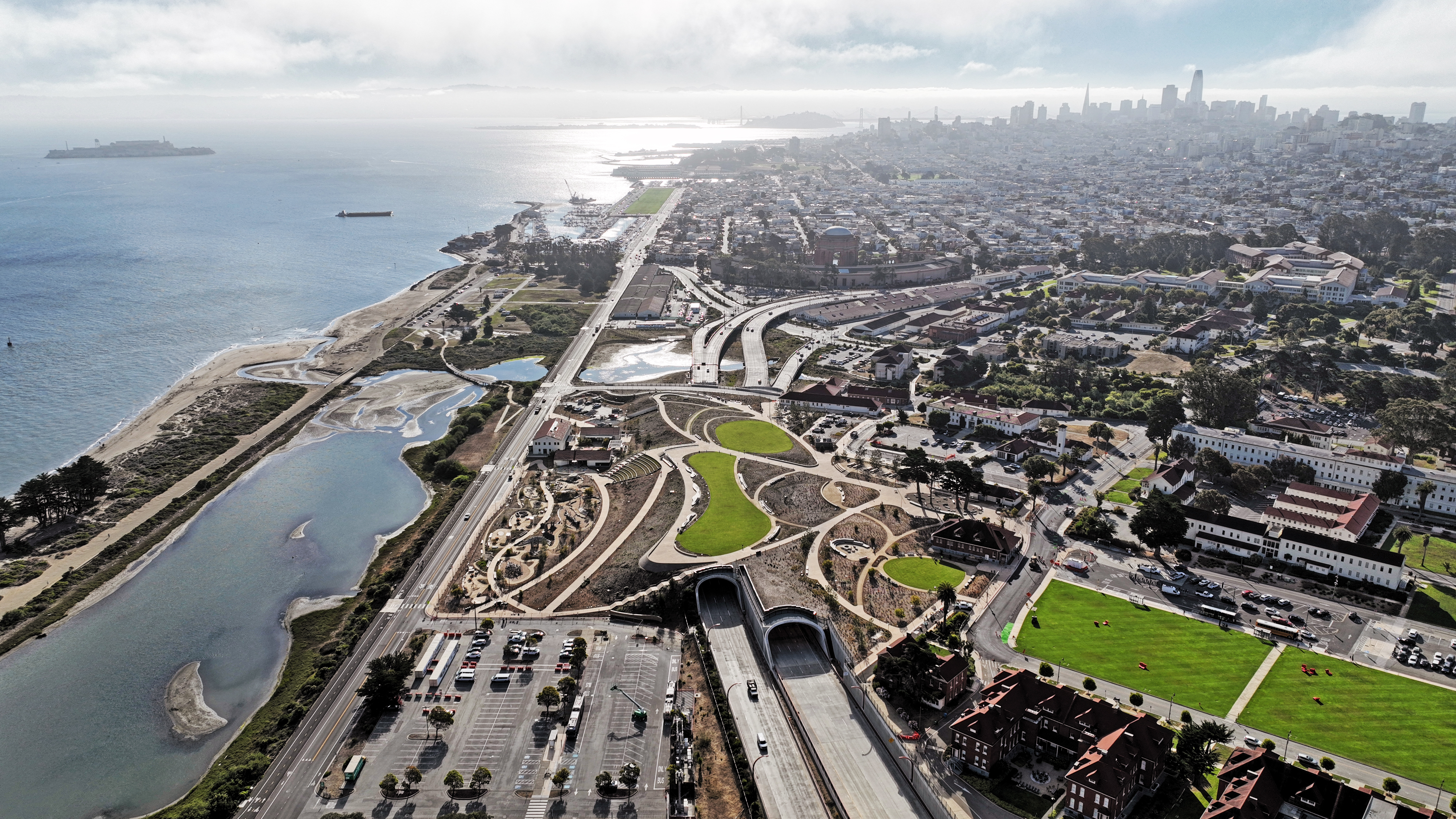 On October 17, 1989, the 6.9 magnitude Loma Prieta earthquake shook the city of San Francisco, wreaking havoc on its streets. This included a six-lane, 1.6-mile raised stretch of Highway 101 known as Doyle Drive, which connected the city’s downtown with its Golden Gate Bridge, cutting through what was then the Presidio military base. Following the natural disaster, city officials declared the roadway seismically unsafe.

Doyle Drive’s impending demolition paved the way for planners to replace it with something that was not just structurally sound, but also visually appealing. That’s when local landscape architect Michael Painter came up with an idea: lowering the new roadway into tunnels and creating parkland above them. The open space would be accessible to both bicyclists and pedestrians and put some of the city’s best features—including its neighboring San Francisco Bay—on full display.

Painter died of cancer in 2018 at the age of 83, but his dream came to fruition this past Sunday, with the opening of Presidio Tunnel Tops, a 14-acre park above two highway tunnels, replacing Doyle Drive, which opened to traffic in 2018. The park is part of the larger Golden Gate National Recreation Area, a 114-square mile collection of associated parklands that includes Muir Woods, Alcatraz and the Presidio, which the National Park Service officially took charge of in 1994. It’s also just one of dozens of infrastructure reuse projects that have been popping up across North America—from Toronto to Mexico City—in the last decade, transforming under-utilized railway trenches and waterfronts into greenways, parks and cultural destinations.

“Infrastructure reuse offers a unique opportunity to face the discriminatory patterns of investment that have shaped our American cities today,” says Asima Jansveld, managing director of the High Line Network, a peer-to-peer group of infrastructure reuse projects and the people who are helping bring them to life. The network includes sites that are already up and running, such as New York City’s hugely successful High Line, a 1.45-mile-long elevated linear park, greenway and rail trail with sections opening from 2009 to 2019, completely transforming a former railway line in Manhattan’s West Side, as well as those currently in the works, like Destination Crenshaw, a 1.3 mile redesign of L.A.’s north-south Crenshaw Boulevard. The latter will feature six new public parks and more than 100 public artworks and exhibits, including statues and augmented reality storytelling, all celebrating Black Los Angeles. “Projects in the network are transforming underutilized areas into equity-focused public spaces that unleash positive economic and social impacts for their communities,” says Jansveld.

With plans for Presidio Tunnel Tops underway in 2014, organizers launched an international design competition to find a suitable developer for the project. They ultimately selected James Corner Field Operations, the San Francisco branch of the New York-based firm that designed the High Line. Community input also played a big role in the park’s development.

“The bulk of the feedback,” says Chris Lehnertz, President and CEO of the Golden Gate National Parks Conservancy, the park’s nonprofit partner, “is that people just wanted a place where they could hang out.” Presidio Tunnel Tops offers plenty of places to do just that, from picnic tables shaded by Torrey pine trees to a series of driftwood benches made from fallen Presidio cypress trees. A backdrop that includes the Golden Gate Bridge and Alcatraz is simply an added bonus.

Open meadows invite lounging, a wind-sheltered campfire circle will eventually host evening ranger talks, and a huge playground accommodates kids of varying ages with elements like a pear-shaped “play nest” inspired by an oriole’s own roost and an enormous 250-year-old reclaimed oak tree, sanded down and sculpted so that kids can climb both on it and through it. On days when San Francisco’s persistent fog stays at bay, the park’s Presidio Steps provide a perfect spot for catching the sunset.

Along with a casual café that will be opening inside the neighboring Presidio Transit Center in late 2022, Tunnel Tops hosts a rotating variety of mobile food trucks, carts and tents daily, serving up everything from Singaporean satay with peanut sauce to Ukrainian dumplings and borscht. But what might be the park’s most impressive feature is that it connects the Presidio’s historic center to its long isolated Crissy Field waterfront, a former military airfield (and another High Line project) that’s been transformed into grassy fields and restored wetlands, making the overall space much more accessible.

Opened in 2018, Tulsa’s Gathering Place transformed an unremarkable stretch of Arkansas River waterfront into a 66.5-acre series of distinctive spaces designed to spark creativity and imagination. “The park now sits on rolling hills with 5,800 evergreen and deciduous trees, 16 acres of meadows, and a three-acre pond,” says Julio Badin, Gathering Place’s executive director. Two 300-foot-long land bridges connect the park to the waterfront, which Badin says was once separated by a major roadway, and more than 160 play structures, including a five-acre adventure playground with castle-like towers, swinging bridges and a sensory garden. Along with a 26,200-square-foot skate park and lighted courts for sports like volleyball and hockey, the park also features a variety of free programs, including movie nights, guided garden tours and “themed” dog play days.

Toronto’s ten-acre, 1.2-mile Bentway is a public space project that opened along the shoreline of Lake Ontario in 2018. It’s located beneath the city’s Gardiner Expressway, an elevated stretch of freeway that’s one of the longest bridges in Ontario Province. “Functionally, we’ve turned the Gardiner Expressway upside-down,” says Robert McKaye, the Bentway’s senior manager of planning and design. “This piece of infrastructure now gives back to the spaces below with innovative approaches to planting, stormwater management, lighting, bio-filtration systems, etc.”

In addition to prime waterfront access, Toronto’s Bentway includes a 1.09-mile multi-use trail and 55 outdoor civic areas referred to as “rooms,” which host everything from farmer’s markets to performance theaters. Winter brings an ice skating loop, and this summer a roller skating rental pop-up runs through August 21.

“The Rail Park is in a part of the city with just 4 percent tree cover and very limited access to parks and public spaces,” says Rebecca Cordes Chan, the Rail Park’s executive director, “so we weren’t surprised to see the park’s use increase dramatically over the past two years.” Opened in 2018, the first quarter-mile of what will eventually be a three-mile parkland connecting the city’s Northern Liberties neighborhood to Fairmount Park is already a gathering spot for local communities, including Philadelphia’s Chinatown. “The diversity of the people it literally and metaphorically connects is a highlight for me,” says Chan. “From the different languages I hear in conversation, to seeing book club meetups or people practicing meditation out there. It’s really special.”

Now considered the backbone of New Orleans’ bike network (which had a mere 11 miles of bike lanes prior to 2005’s Hurricane Katrina and has grown to a whopping 120-plus today), the 2.6 mile Lafitte Greenway sits on what was once an 18th-century drainage canal and then a 20th-century passenger rail line, before the destruction of Katrina left it blighted and abandoned for years. “After the storm, community members and city leaders came together around the vision to create a space that would connect people to nature, their destinations, and each other,” says Camly Tram, development and communications manager for the Friends of Lafitte Greenway, a nonprofit that is working together with the city and the New Orleans Recreation Development Commission (NORD) to help sustain and maintain the greenway.