Some people claim that pizza was invented in Greece; others say it hails from southern France. A friend of mine who went to Yale swears it comes from New Haven. Sheesh! Have any of these people been to Naples? 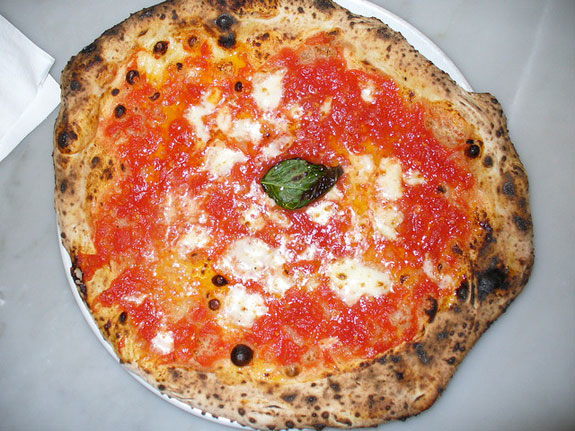 OK, it has never been proven that pizza was first popped into the oven in Napoli, though everyone knows pizza Margherita—a simple classic topped with tomato sauce, mozzarella cheese and basil leaves, mimicking the red, white and green colors of the Italian flag—was created by Neapolitan chef Raffaele Esposito to celebrate a visit to the city by Queen Margherita of Savoy in 1889.

Anyway, who gets the credit for inventing pizza is a moot point when the answer to who makes the best pizza is obvious: Naples, Naples and more Naples. Fie on your Chicago deep-dish, your Roman pizza bianca and especially your mass-produced Domino's and Pizza Hut. There is simply nothing like Neapolitan pizza made of hand-kneaded dough too fragile to toss, topped with fresh, authentic ingredients and baked fast on the surface of a bell-shaped, wood-burning oven. When the pizza maker (or pizzaiuolo) pulls it out on a paddle and slides it onto a plate, who can wait? The mozzarella is a milky puddle, with a mat of red sauce and a frame of incomparably chewy crust, flexible enough to fold in half and eat like a sandwich on the street. In famous Naples restaurants like Brandi, Da Umberto and Trianon da Ciro, pizza-making is high art, but you’d have to be cursed by the gods to find a bad pie anyplace in town.

Why, then, I have always wondered, is it so hard to find Neapolitan pizza in the U.S.? We’ve got every other celebrated Italian product from olive oil to shoes.

To answer that question, I met up with Roberto Caporuscio, a member of the Associazione Pizzaiuoli Napoletani and founder of Keste Pizza & Vino, which opened last year on Bleecker Street in New York.

Caporuscio, born into a cheese-making family from Pontinia south of Rome, studied pizza-making in Naples before coming to the U.S., where he serves as ambassador-at-large for the APN. When discussing other types of pizza—for instance, the pies available at longtime pizza favorite John’s just across Bleecker Street—he’s always diplomatic: “It’s not better or worse, just different.”

Asked to comment on New Haven’s claim to the pizza birthplace title, he said, “They invented New Haven pizza there.”

A big bear of a man with palms permanently pink from handling pizza dough, Caporuscio explained that immigrants to America from the Campania region of Italy around Naples were farmers, shoemakers and builders, not pizzaiuoli. “And to make a Neapolitan pizza you need one thing,” he said. “A Neapolitan pizza-maker. Someone who understands all the details, how to stretch and raise the dough to keep it aerated, which is what makes it chewy.”

I had to press him on the delicate matter of the toppings, especially the cheese, because I’m a purist when it comes to mozzarella, which in Naples means mozzarella de bufala, unavailable in the U.S. because it isn’t pasteurized. Caporuscio solves that problem by making his own cow’s milk mozzarella, known as fior de latte, on the premises at Keste; only one pizza there, the Regina Margherita, features the imported buffalo milk version of the cheese.

I got a taste, of course, and it took me straight back to Napoli—which is probably the main reason why I love Neapolitan pizza.