To mark the occasion, a new exhibition in the area under the cathedral’s courtyard honors novelist Victor Hugo and architect Eugène Viollet-le-Duc 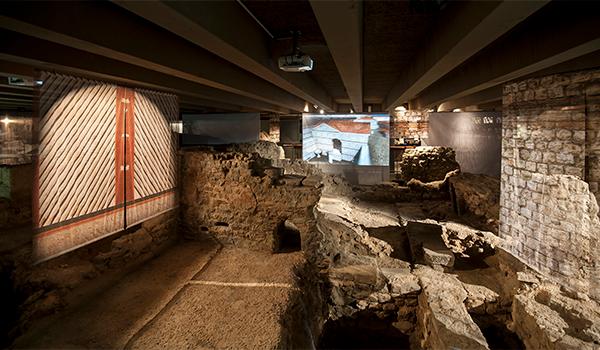 In a sign that the universe of Notre-Dame Cathedral is returning to life, the archaeological crypt that sits under its courtyard reopened today—for the first time since flames devoured the cathedral’s roof and toppled its spire in April last year.

Before the crypt could reopen, masses of toxic lead dust from the fire had to be removed, ancient stones cleaned, ventilation systems vacuumed, lighting and interactive programs reorganized, molds eliminated and anti-Covid measures imposed, including rules for physical distancing, mask-wearing, touching interactive screens and limitations on the number of visitors.

The crypt celebrated the opening with an exhibition on the two 19th-century men who helped restore the 850-year-old medieval monument to greatness: the novelist Victor Hugo and the architect Eugène Viollet-le-Duc.

“We are paying homage to the cathedral after all that has confronted Paris, from the tragedy of the fire to the crisis of the pandemic,” said Sylvie Robin, chief curator of the crypt, who helped organize the exhibit.

The crypt has been one of Paris’s hidden jewels ever since it opened to the public in 1980. At more than 19,000 square feet, it is the largest crypt in Europe and includes archaeological discoveries made during excavations between 1965 and 1970 to prepare for the construction of a parking lot on the open plaza in front of the cathedral’s main entrance. (The plaza, which has been car-free for some time, reopened to the public at the end of May.)

“It was terrible,” she said of the effect of the fire on the crypt. “There was lead everywhere. Molds and micro-organisms spread, because we had to turn off the ventilation system. So today is an important moment, a very moving moment of renewal and hope for us.”

Fortunately, rats, which otherwise infest Paris, did not move into the crypt. “There was no food for them here,” said Robin. “They preferred the gardens on higher ground!”

Whenever I visit the crypt, it seems as if I am walking through the history of the Ile de la Cité, the historic heart of Paris, from ancient times through the 19th-century. Even though this is a cool deep underground place, I always feel the warmth of the yellowish lighting that caresses the centuries-old stones, bathing them in shades of biscuit, beige, tan, even rose.

Over the years, archaeologists have discovered the remains of a docking port of the ancient Gallo-Roman city of Lutetia, before it became Paris, and of later Gallo-Roman public baths; a stretch of fourth-century ramparts; the basement of a medieval chapel and parts of a medieval road; and traces of the 19th-century sewage system created by Baron Georges- Eugène Haussmann, the prefect of the Seine who masterminded the rebuilding of much of Paris.

Before the fire, 13 million people visited the cathedral every year, making it the most visited monument in Paris, but the entrance to the crypt is discreet and off to the side, and many visitors don’t even know that it is there. Even on opening day of the exhibit, “Notre-Dame de Paris, from Victor Hugo to Eugène Viollet-le-Duc,” there were few visitors.

Upon entering, I was greeted by a giant black-and-white photograph taken at the time of the excavations. It showed an enormous, open oval archaeological site in the plaza, ringed by dozens of parked cars, a reminder of the ancient mysteries of the city being uncovered in the second half of the 20th century.

“Parked cars covered the entire space, and cars could even drive right past the front of the cathedral,” said Robin. “Thankfully, it was eventually decided that the area was much too polluted and the cars had to park elsewhere.”

I followed a path above and around the ancient stones as the remarkable story of the rescue of Notre-Dame unfolded in photographs, film, engravings, prints, caricatures, 3-D models and posters. (The cathedral was damaged during the French Revolution and left in such a degraded state that by the end of the 18th century, extremists were calling for it to be demolished and its stone to be sold as construction material.)

Hugo’s 1831 epic novel, The Hunchback of Notre-Dame, ignited a national awakening. For Hugo, the cathedral was “a vast symphony in stone, the colossal handwork of a man and a people” that had suffered “innumerable degradations and mutilations . . . both by the ravages of time and the hand of man.”

The exhibit includes a variety of tributes to the novel, including several versions of his novel; stills from Albert Capellani’s 1911 black-and-white silent film “Notre-Dame de Paris” and from Disney’s 1996 animated musical version; paintings of the French Roma teenager Esmeralda, the novel’s main female character; and a caricature of Hugo sitting triumphantly atop Notre-Dame.

Three pen-and-ink drawings by Hugo himself underscore his attachment to the cathedral. One, done in about 1847, shows the outline of the cathedral’s two towers set in a sepia-colored fog.

In 1845, Viollet-le-Duc, a young architect in his early 30s, in partnership with his friend and fellow architect Jean-Baptiste Lassus, was put in charge of the restoration of Notre-Dame, a project that would take more than 20 years. He recreated stained-glass windows, restored the western façade, replaced sculptures destroyed during the revolution, rebuilt the sacristy, designed the gargoyles on the rooftops, and, most memorably, created the delicate lead-covered wooden spire that collapsed in the great fire of 2019.

Most striking in the exhibit is a wall of photographs and reproductions of the cathedral taken in the mid-19th century before, during and after Viollet-le-Duc built the spire. The restoration of the cathedral began a few years after the invention of the daguerreotype in 1839, and the images are some of the earliest ever taken of Paris. “Right after the fire, we decided that exhibiting these early photos would be a way to capture the spirit of that era,” said Robin. Curators scoured the archives of the Musée Carnavalet, which is dedicated to the history of Paris and is part of the same institution as the crypt. “This is the first time many of these images have ever been shown,” she said.

Among the images are Charles Nègre’s photo of the façade around 1853, before the spire was built; Charles Marville’s close-up albumin print from around 1860 of the spire, a view of Paris in the background; and the Bisson brothers’ photo around 1857 of the spire under scaffolding as it was being built.

Despite the fact that the spire was a relatively modern add-on to a medieval structure, the French government has decided to reconstruct it exactly as it was before the fire.

In an eerie premonition, an ink and gouache drawing by François-Nicolas Chifflart shows the fire in the cathedral imagined by Victor Hugo in his novel.

“The exhibit reminds us of the central place the cathedral had and has in the hearts of Parisians and of people around the world,” said Robin. “And the setting reminds us of the incredible, rich history of Paris.”

As planning for the current restoration of the cathedral begins and government officials and architects decide how to proceed, Viollet-le-Duc’s vision for Notre-Dame may serve as a guide. “To restore a building is not to maintain, repair or recreate it,” he wrote, his words writ large in one panel of the exhibit. “It is to reclaim a complete state that may never have existed before.”

Then there are Hugo’s words as well, on another panel: “The monument is the summary and summation of the human intelligence. Time is the architect, the nation is the builder.”

Elaine Sciolino is a Paris-based writer for the New York Times and the author of The Seine: The River That Made Paris.