While flying from London to New York last month, software developer Paul Williams and his fellow Virgin Atlantic passengers were treated to some unscheduled in-flight entertainment. Looking out the window while flying over the northeastern seaboard, Williams spotted dancing green lights on the horizon. Grabbing his camera and steading it on a backpack, he took a series of 770 consecutive 3 second images, he explained on his YouTube page, and later strung them together into the beautiful timelapse above.

Perhaps most remarkably, this wasn't Williams' first time capturing the aurora on film from 30,000 feet. A frequent trans-Atlantic traveler, Williams has seen the northern lights, and captured similar videos, on six other flights. How does he get so lucky? Williams reported via Twitter that before each flight he checks the National Weather Service's Aurora Forecast to see if visible auroras will overlap his flight path. If the outlook looks good, he makes sure to snag a window seat on the northern side of the plane, camera ready. The lights often first appear as "wispy monochrome clouds," he said, that gradually get easier to see. Having the right camera also helps, he added. While the greens are visible to the naked eye, his F1.4 lens brightens subtler colors.

The northern lights appear when solar wind—charged particles expelled by the sun—get sucked into the earth's magnetic field and collide with our atmosphere. In general, the further north you are, the easier they are to see, and most U.S. to Europe flights travel fairly far north. So, travelers headed on a nighttime flight across the Atlantic, consider keeping the window shade up. You never know.

See still images from Williams' flight on his Flickr page, including this perfectly timed shot with a meteor. 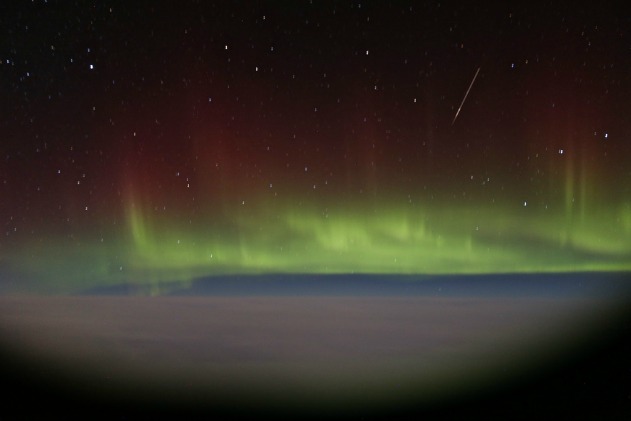 A meteor shoots through a photo of the northern lights taken out an airplane window. (Photo courtesy of Paul Williams.)