Books and travel have always gone hand in hand, but the current pandemic, in which people from around the world experienced mass lockdowns, made the need for escape through the written word even more crucial.

In his new book Around the World in 80 Books, author and literary scholar David Damrosch takes his readers on a global journey using some of the most transportive books ever published, from Marcel Proust’s In Search of Lost Time, set in high-society Paris, to Marjane Satrapi’s Persepolis, capturing life in Tehran during the Iranian Revolution. A recognizable force in the field of literature and a professor at Harvard, Damrosch weaves in anecdotes from his own life as a ravenous reader, starting from a very young age while browsing the dusty bookshop near his school bus stop, to his many years teaching. Together with excerpts pulled from each book, Damrosch builds an itinerary that circumnavigates the globe—and doesn’t require a passport to enjoy. His carefully curated compendium of must-read written works spans time periods and continents, and includes a diverse selection of voices. 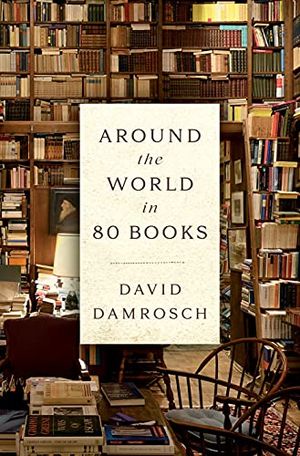 Around the World in 80 Books

A transporting and illuminating voyage around the globe, through classic and modern literary works that are in conversation with one another and with the world around them.

“As [the Roman lyric poet] Horace once wrote, ‘literature is both sweet and useful,’” Damrosch says. “And since he put ‘sweetness’ first, it seems to me that literature provides an exceptional outlook and different way to look at the world while being the most pleasurable way to do so.”

Here are eight of the 80 books Damrosch highlights:

The Tale of Genji, by Murasaki Shikibu (Tokyo)

Written in the early 11th century by Murasaki Shikibu, a Japanese poet-turned-novelist and lady-in-waiting, The Tale of Genji tells the story of Hikaru Genji, the fictional son of a Japanese emperor during the Heian period (794 to 1185) who finds himself unexpectedly removed from the line of succession. Often considered the world’s first novel, it wouldn’t be until many centuries later, in 1925, that the 54-chapter tome would receive an English translation by the scholar Arthur Waley. The massive work not only transports readers to aristocratic Japan, but to an age that’s far removed from modern times. “Murasaki gives us a new perspective on the present moment,” Damrosch says. “She’s a great master of this and challenges us to begin to understand what so many of her assumptions and expectations are, challenging us to read more carefully.”

The Country of the Pointed Firs, by Sarah Orne Jewett (Maine)

Despite having lived her entire life in Maine, author and poet Sarah Orne Jewett opted to create a storyline for her 1896 novel, The Country of the Pointed Firs, built entirely around the experiences of a summer visitor. In the book, the narrator, a writer from Boston, visits the fictional coastal village of Dunnet Landing in an effort to finish writing her book and becomes transfixed by the solitude that the area’s windswept cliffs and lush greenery provide. In his interpretation of the work, Damrosch points to a review published in 1994 by the Library of America that describes Dunnet Landing as an “imaginary town that will be recognizable to anyone who has been to Acadia National Park or Mount Desert Island.” He adds, “Literature in its very nature provides a perspective on the world, both inside and out. Authors often write from a distance, combining the familiar with the unfamiliar, the native with the foreign, and yet compellingly write and connect audiences to places that are otherwise unfamiliar.”

In Search of Lost Time, by Marcel Proust (Paris)

“For me, Paris is Proust,” writes Damrosch of his analysis of In Search of Lost Time, a multi-volume work published between 1913 and 1927 and inspired by the novelist’s recollections of his youth in the Parisian borough of Auteuil. Damrosch had many distinctive scenes to choose from, such as when Proust attends a fancy soiree at a prince’s home in Paris to family trips to the fictitious seaside town of Balbec. One in particular is unequivocally French, though, and it’s when the narrator eats a tea-soaked madeleine, a dessert synonymous with France. Proust writes, “I raised to my lips a spoonful of the tea in which I had soaked a morsel of the cake. No sooner had the warm liquid mixed with the crumbs touched my palate than a shiver ran through me and I stopped, intent upon the extraordinary thing that was happening to me. An exquisite pleasure had invaded my senses, something isolated, detached, with no suggestion of its origin . . . I had ceased now to feel mediocre, contingent, mortal. Whence could it have come to me, this all-powerful joy?” Damrosch says it’s no surprise that Proust would focus on food as a transportive device. “There’s something fundamental about food,” he says. “What we consume and enriches us, and what we take in. Both literature and food are what enrich our souls.”

Set in pre-colonial Nigeria beginning in the 1890s and leading to the inevitable invasion of the African continent by Christian missionaries from Europe, Things Fall Apart provides a snapshot of African society through the eyes of Okonkwo, a fictional Igbo man. Opting to divide his 1958 novel into three parts, Nigerian author Chinua Achebe gives readers a front row seat to how life abruptly changes for Okonkwo with the introduction of imperialism, creating two strikingly different worlds for the protagonist to navigate. One aspect of the novel that Damrosch highlights is language usage. Damrosch writes, “Achebe’s portrayal of African society from within is closely linked to his project of creating an English prose infused with oral tales and proverbs [found throughout Africa].” He adds, “As a student of literature, it’s really interesting what happens when the European novel starts to be adapted to other parts of the world where there wasn’t a novelistic tradition, and Achebe is very clearly building both on and against that. He’s not only looking at his novel from isolation, but also poetic language and trying to think of how to use the English language as an anti-Imperialist.”

Damrosch describes Persepolis as “an autobiography, a capsule history of the [Iranian Revolution] and its aftermath, and a meditation on the cultural complexity of the contemporary world.” Published in 2000, the illustrated memoir follows Marji, a 10-year-old girl living in Tehran, Iran, in an upper-middle-class household, and the dramatic societal shift that occurs during the Iranian Revolution, an uprising that ended in 1979 and resulted in the overthrowing of the Pahlavi Dynasty and the rise in religious extremism. Using black-and-white illustrations paired with compelling prose, author Marjane Satrapi shows how quickly life changes for her and her family as they adjust to living under a new political regime and the resulting war that not only upends her childhood naivete but also her safety; at the age of 14, her parents move her to Austria to escape the war. “Persepolis is an extraordinary act of personal and cultural memory,” Damrosch writes, “though in its highly individual framing it certainly isn’t (and doesn’t claim to be) the whole story of Iranian history and culture.”

Author Virginia Woolf opted to set her 1925 novel in her hometown of London, placing it at a time soon after the final bomb dropped during World War I. Damrosch describes Mrs. Dalloway as “one of the most localized of books,” and readers don’t have to read far to confirm that this post-war tale is firmly set in central London. The locale becomes apparent in the opening scene when the protagonist, Clarissa Dalloway, takes a leisurely stroll one day in June along recognizable streets like Bond and Victoria as well as in Regent’s Park in preparation for a party she’s hosting later that evening for the city’s well-to-do. The novel itself unfolds over the course of a single day, giving Woolf the freedom to plant her story firmly in a very specific time and place without deviating outside its borders. “This is very much an homage to London,” Damrosch says. “There are specific spaces, such as the Army and Navy store, that [exhibit] an intense awareness of place. Overall, the life of a city has never been better evoked than by Woolf.”

From the 16th century to 1888, when Brazil abolished slavery, approximately five million slaves were transported from Africa to the South American country. By then nearly half of Brazil’s population was comprised of people with both African and European heritage, including Joaquim Maria Machado de Assis, whom Damrosch praises as “Brazil’s leading novelist.” Machado’s mixed heritage inspired him to write The Posthumous Memoirs of Brás Cubas, a novel published in 1881 and narrated by a dead protagonist by the name of Brás Cubas from the grave. In his writing, Machado is highly critical of the patriarchal and slave-owning society in which he lives. Damrosch writes, “In his ‘free form' novel as in his life, Machado de Assis made his way, like some Yosemite free climber, up the cracks and fault lines of Brazilian society. He left us an incomparable map of a distinctly un-utopian Brazil in the melancholy comedy of his deceased yet immortal hero’s journey around life.”

Taking place largely in Shanghai, where Eileen Chang was born and raised, as well as Hong Kong, where she moved for college, Love in a Fallen City is a 1943 novella about a woman named Bai Luisu and her love interest, Fan Liuyan. During a romantic escapade to Hong Kong, Liuyan declares his love for Luisu on December 7, 1941, which, unbeknownst to them, also happens to be the same day as the Japanese attack on Pearl Harbor an ocean away in Hawaii. A day later, the couple watches helplessly as the early stages of World War II start to unfold as Japan invades Hong Kong. Chang offers a front-row seat of the war from the perspective of an onlooker. “Early on, Chang developed a keen eye for the complexities of life in a Shanghai poised—or caught—between tradition and modernity, waning patriarchy and nascent feminism, and Asian and European cultures,” Damrosch writes. “Her stories of the early 1940s were written under Japanese occupation and avoid making open political statements, but the wartime setting is always in the background.”