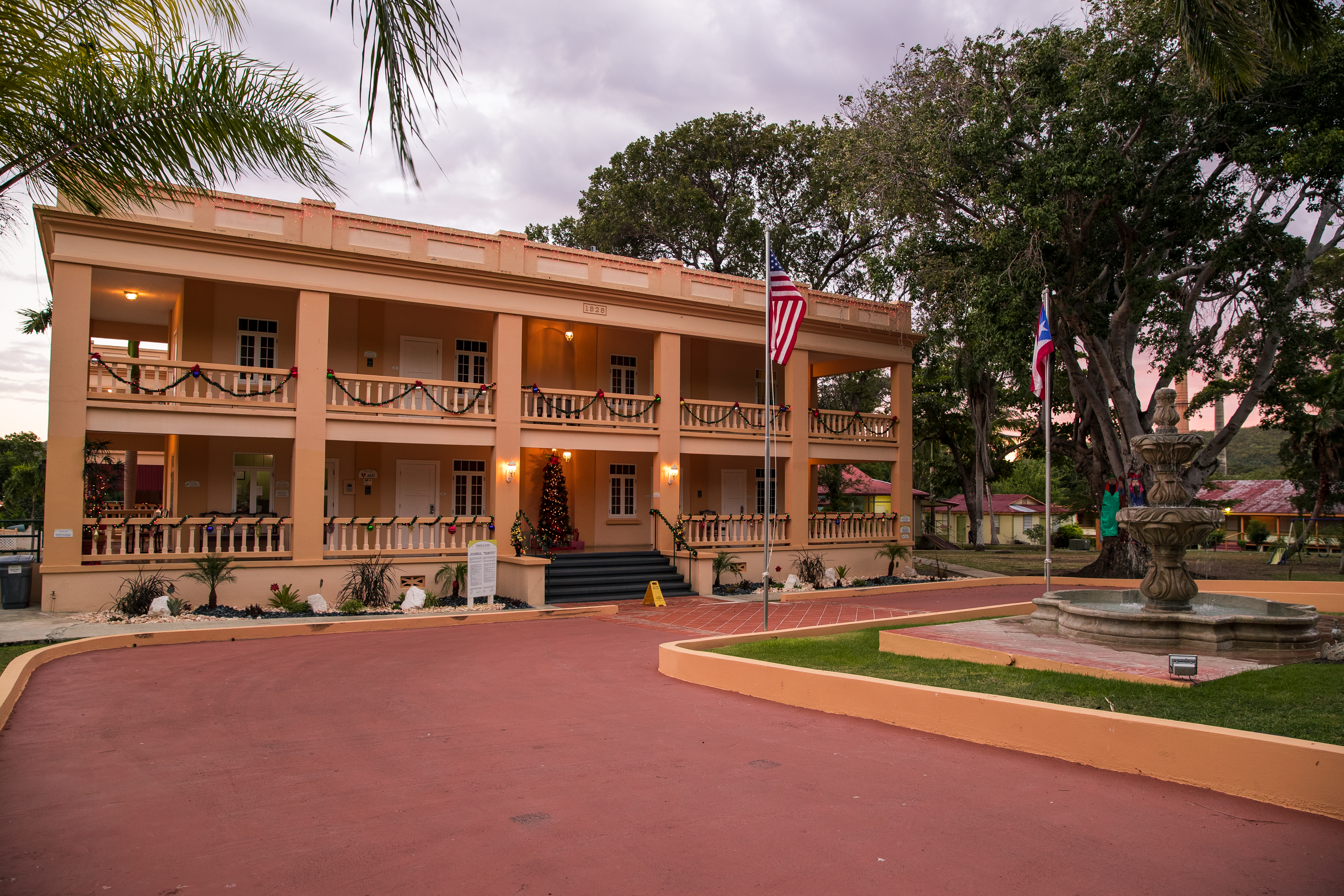 Guánica 1929 was one of Puerto Rico’s first inns established under the U.S. government. Discover Puerto Rico

Tucked away in Puerto Rico’s southwest corner, Guánica is a laid-back coastal town perched upon calm Caribbean waters. Visitors flock here for its natural offerings: a crystal clear sea that’s ideal for snorkeling; rows of bright sunflower fields; and the 9,500 acre Guánica Dry Forest Reserve, a Unesco Biosphere Reserve that’s one of the largest remaining tracts of tropical dry coastal forest in the world. But Guánica is home to a unique slice of island history as well—Guánica 1929, a family-owned lodge that got its start in the early 20th century as one of Puerto Rico’s first inns established under the U.S. government. This two-story classic colonial structure sits on a former sugar plantation and still features its original bi-level wraparound veranda. Today, the palm-dotted property also sports an outdoor swimming pool, as well as 27 simply styled guest rooms and a restaurant serving up plates of freshly caught mahi-mahi and carrucho (conch fish). It also happens to be Puerto Rico’s oldest parador.

“Paradores” are a brand of inns marketed by the government-owned Puerto Rico Tourism Company. Each inn is small, independently owned and operated, though must meet a specific set of criteria to earn the “parador” designation. The Puerto Rico Tourism Company created the parador program, Paradores de Puerto Rico, in 1973, “with the idea of decentralizing tourism and taking guests outside of San Juan,” says Xavier Ramirez, Paradores de Puerto Rico president and the co-owner and manager of the island’s Combate Beach Resort. “The government saw that a similar program, called the Paradores de Turismo de España, already existed in Spain and was successful. [In their case] it’s a chain of luxury hotels—often old castles or monasteries—that have been converted with the same idea: to get people outside of the big cities like Barcelona and Madrid and experience the rest of the country.”

Government sponsorships of this kind aren’t unusual. In Italy, agriturismo, also known as farm stays, began in the 1960s as a way to attract visitors to the Italian countryside, where more and more local residents were moving away. Italian lawmakers began formally regulating these lodgings—which typically host on-site activities like tending bees and milking cows—in 1985. Similarly, Portugal’s Pousadas de Portugal, a chain of luxury, traditional and historic hotels occupying everything from a medieval royal palace to an old Franciscan convent that were state-run from the 1940s until 2003, when hospitality purveyor Pestana Hotel Group took over the program.

Puerto Rico’s paradores are small-scale resorts that are a part of the local community, and known for both their boricua (Puerto Rican) hospitality and affordable rates. For the most part they’re considered country inns—nothing too fancy—and are located in non-metro areas, including the island’s beach towns and mountain villages. A dozen Puerto Rico paradores are currently in operation, including the sustainably minded Turtle Bay Inn in Lajas (home to La Parguera bioluminescent bay), and Yunque Mar Beach Hotel, a 15-room parador in Luquillo, on the island’s northeast side.

According to Hilda Blanch-Miranda, a historian with the Ana G. Mendez University’s Jesús T. Piñero Library and Center for Social Science Research who specializes in Puerto Rico and Caribbean studies, the parador program grew out of a push for island tourism that began in the 1930s. “This is when the U.S. saw the possibility of developing tourism to Puerto Rico as part of the overall economy,” she says. The two-fold endeavor consisted of developing local infrastructure, including the building of hotels and roadways, and launching a publicity and advertising campaign for the island. While World War II brought a temporary pause to these efforts, they experienced a big resurgence in the late 1940s and early 50s. In 1970, the then-Puerto Rico Governor Luis A. Ferré created the Puerto Rico Tourism Company to coordinate the marketing and growth of the island’s growing tourism industry. A few years later, Paradores de Puerto Rico was born.

With it came a clear set of rules. That is, to become a parador in Puerto Rico, a property must adhere to four main requirements. First, it has to exist outside of a metro area. Second, it must be family owned and operated (“Our motto is ‘Families serving families,’” says Ramirez). Another condition: the property must have no more than 75 guest rooms. “This means that whenever you stay at a parador,” says Ramirez, “there’s an 80 percent chance that you’ll meet one of the owners during your stay.” Since an average stay at a parador is two-to-three nights, “you’ll also likely get to know most of the employees by name,” he says, “and get that sense of one, big family.” Lastly, each property must undergo a twice-yearly property inspection, and obtain an official score of 85 percent or higher to continue on as part of the brand.

While more than 50 properties have been part of the paradores program since its beginning, some have outgrown the 75-room size limit, and others have been purchased by municipal governments or non-Puerto Rican families, meaning they can no longer be considered a parador. Then there are those where the owners retired and had no one to succeed them, and a few that Ramirez says “just stopped updating their properties, so the Tourism Company dropped them from the program.”

Still, each parador that remains in the program is entirely unique, and boasts its own distinct draws that keep guests returning. “Depending on where you go on the island the feeling of the parador is different,” says Ramirez. While Villas del Mar Hau, on Puerto Rico’s northwest coast, offers 46 beachfront, candy-colored villas, beach volleyball, and waterfront dining views, the pet-friendly Villas SotoMayor sits among the island’s central mountains and features horseback riding and tours of the property’s working farm, Hacienda Don Jun, which provides fresh ingredients for the parador’s onsite restaurant. “Paradores are really more about the local experience than the individual amenities,” says Ramirez, “but every one of them is enchanting in its own way.”

Blanch-Miranda agrees. “Paradores are also cozier than regular lodgings,” she says, “and getting there is part of the experience. The scenery, the mountains. You get a sense of the island’s landscape as you go.”

Ramirez’s own parador, Combate Beach Resort, is located within the beachside town of Cabo Rojo along the island’s west coast, just a five-minute walk to Playa El Combate, the island’s longest beach and a great place for sunsets. It’s also within easy distance to the crescent-shaped Playa Sucia, one of Puerto Rico’s most popular—and picturesque—beaches, as well as Cabo Rojo National Wildlife Refuge, 1,836 acres of rolling hills, grasslands, mangrove swamp that’s critical habitat for the yellow-shouldered blackbird, grounds for nearly 145 resident and migratory bird species, and home to Las Salinas (“the salt flats”) and their stunning pink-hued lagoon. The parador itself boasts 47 simple and spacious guest rooms, kayak and bike rentals, a lobby bar, and even a wine cellar.

Ultimately, paradores give non-Puerto Ricans a chance to experience the island’s true hospitality. “With paradores,” says Ramirez, “the personnel are mainly locals, the menus in our restaurants have to be made-up of largely local dishes, and the décor represents the area where the parador is located.” However, he says, paradores also play an essential role in the local community. “We don’t want our guests holed up inside our lodgings their entire stay,” says Ramirez. “Our focus is on promoting each area’s attractions, and encouraging our guests to get out there and explore.”