Puerto Rico’s Bioluminescent Bays Are Brighter Than Ever 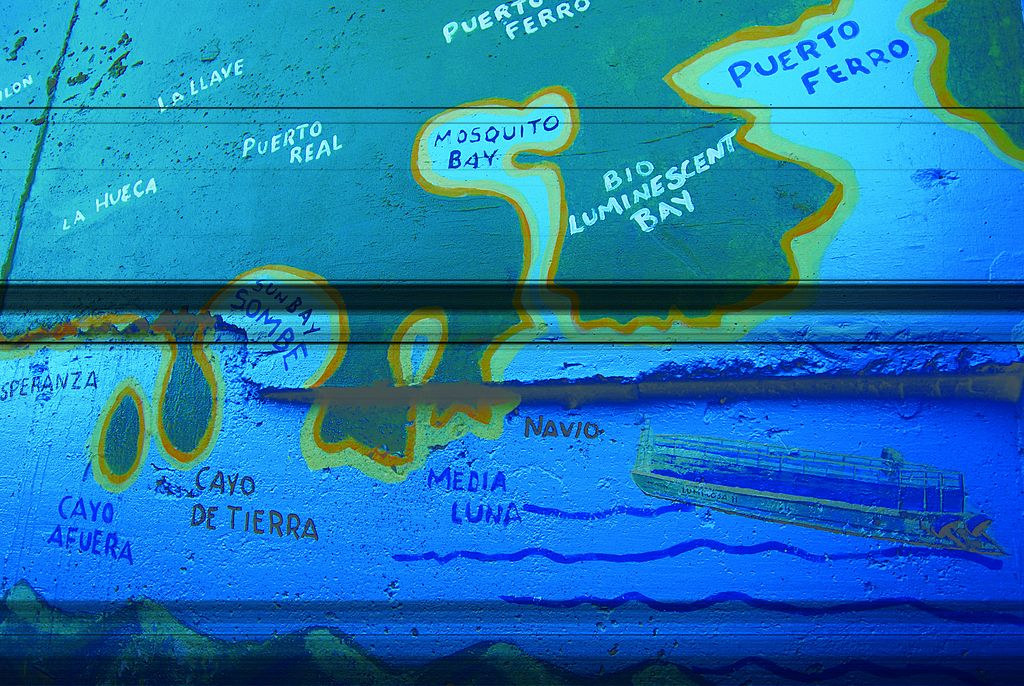 This mural outside of an outfitter's office illustrates the snaking mouth of Mosquito Bay. Leigh Ann Henion/For The Washington Post via Getty Images

Mark Martin Bras was a child the first time he saw Puerto Rico’s famous bioluminescent bays. His father and uncle took him one evening to Mosquito Bay, and he was mesmerized by the electric-blue glow of the water beneath the pitch-black night sky.

“I remember my father scooping some water into a bucket and explaining to me, scientifically, what was going on,” he says. “I was surprised to learn that living organisms were the ones causing the water to glow.”

That educational moment had a profound effect on the then eight-year-old, who was born and raised on the island. Now 51, Bras has built a career out of studying Puerto Rico’s bioluminescent bays, and currently serves as a field researcher and director of community relations for the Vieques Conservation and Historical Trust (VCHT), a nonprofit that strives to “foster, protect, and conserve the environmental, archaeological, and cultural resources of Vieques,” a 52-square-mile island off of Puerto Rico’s eastern coast.

Bras describes seeing the bioluminescent bays as “magical,” not only in his own personal experience but also for the many travelers who have visited the island. While marine bioluminescence isn’t specific to Puerto Rico, since there are many species of oceanic creatures with the ability to glow (examples include certain types of jellyfish and even some sharks), Puerto Rico’s bays are often considered some of the best in the world for witnessing the natural wonder. Just five ecosystems on the planet have enough of these planktons to truly qualify as bioluminescent bays, and three of them are on the island. Not only that, but many of these glowing species reside in the darkest depths of the oceans in areas difficult or impossible for humans to reach, whereas in Puerto Rico people can experience this phenomenon from a boat or even from the shoreline. In fact, the Guinness Book of World Records recognized Vieques’ Mosquito Bay (also known as Puerto Mosquito), on the island’s southern shore, as the “brightest bioluminescent bay” in the world, estimating, in 2006, 700,000 microscopic organisms occurring in every gallon of water. Two other Puerto Rican bays known for their bioluminescence are Lagunda Grande, on the main island’s eastern tip, and La Parguera, on its southwestern edge. At both locations visitors can experience the waters by boat, however, at La Parguera, swimming tours are also available.

So, what exactly causes Puerto Rico’s bays to transform into a disco come nightfall? The answer lies in the form of tiny single-celled organisms called Pyrodinium bahamense, or “whirling fire of the Bahamas,” which are luminescent dinoflagellates that reside in the Caribbean Sea and in other bodies of water around the world. These phytoplankton emit a bluish-green glow whenever they’re disturbed, be it from the rocking of a wave to the oar of a boat skimming the water’s surface. A chemical reaction happens within the organism whenever a molecule called luciferin reacts to oxygen, resulting in a surge of energy that produces a bright glow. Multiply that by millions of dinoflagellates floating around in the same bay and the result is a naturally occurring light show that arguably rivals Times Square.

It also helps that Puerto Rico is home to a unique ecosystem that is ideal for these organisms to survive.

“The key to the island’s coastal bays is that they have shallow and narrow entrances that help trap these organisms into a paradise-like situation,” Bras says. “The bays provide good biodiversity combined with clear water with very little contamination, which is good for these organisms’ survival since they’re photosynthetic and need sunlight to thrive.”

Unfortunately, this perfect habitat took a major hit in 2017 when Hurricane Maria pummeled the island, leaving many people, including Bras, concerned about whether or not the bioluminescent bays would ever return to their former glory. In its wake, the hurricane destroyed the vast majority of mangrove forests that flank Mosquito Bay and other parts of Puerto Rico’s coastline. These forests provide much-needed nutrients for the organisms along with protection against erosion that could eventually lead to them washing out to sea. After the hurricane, it was almost like someone had flipped a switch, turning the bays as dark as the night sky, according to multiple reports, including one from the Scripps Institution of Oceanography.

“Not only did [Mosquito Bay] come back about eight months after the hurricane, but we’ve also noticed a steady increase in the abundance of the organisms, setting several records including the highest record set last year,” Bras says. “We also compared our numbers to what’s been recorded by other bioluminescent bays, and they’re also seeing increases.”

The VCHT has played an integral role in bringing Mosquito Bay back to its original state by forming a science-based reforestation initiative called the Mangrove Project, which has created nurseries on Vieques to grow four different species of mangroves to help replace the trees that were lost. The trust estimates that more than 3,000 trees will be needed to reforest the bay and these plantings will help fill in areas of land that couldn’t recover naturally on their own.

“With this project, we’ve been exchanging information with representatives from other bays and people studying climate change at both the national and international levels about things like adaptation techniques,” Bras says. “We’re using that kind of capacity building to build the nursery and the production of mangroves in case another natural disaster happens in the future.”

Bras says that the long-term project is community-based, with locals participating by planting trees and spreading awareness.

“We started small but now the project has grown to two nurseries with thousands of trees,” he says.

One of the best ways to experience Puerto Rico’s bioluminescent bays is to see them from the water’s surface. Numerous outfitters, from Kayaking Puerto Rico to Puerto Rico Bay Tours offer kayak and boat tours of Mosquito Bay as well as Laguna Grande and La Parguera. It’s possible to see the bays aglow year round, however the absolute best time is during the dry months between December and mid-April when rain is less likely. Other variables can also affect how well the conditions are to see the bays, including moon phases, water temperature, salinity and currents. Most outfitters won’t go out unless the conditions are prime for viewing.

“There are many factors that affect how visible the bioluminescence may be on any given night, including cloud cover, which may help to block the moon and its light,” according to Abe’s Snorkeling and Biobay Tours, a Vieques-based outfitter.

Bras, in a way, gets transported right back to his first encounter as an eight-year-old each time he experiences the spectacle.

“One of the beautiful things about the bioluminescent bays is that when people of all ages see it they’re humbled down to that pure happy magical moment of nature,” he says. “In this world there are so many things that are hard to take, so it’s nice that this natural wonder can have a child-like impact on people.”