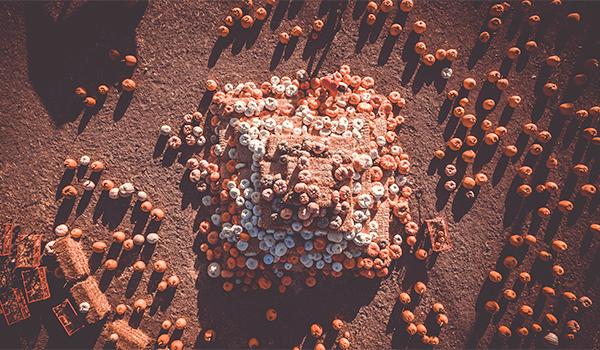 Halloween 2020 is having its moment, even if it will feel different compared to years past. Solvang Farmer Pumpkin Patch and Corn Maze

As with other holidays in 2020, Halloween will look a bit different during this plenty-scary year. Traditional festivities, such as jam-packed Halloween parties, haunted houses and classic trick-or-treating, have been cited in guidelines from the Centers for Disease Control and Prevention as high-risk factors in spreading Covid-19.

Shaped by state and municipal public health mandates, cities across the country are seeing Halloween event changes or cancellations. In September, Los Angeles County officials initially prohibited trick or treating but then released public health community guidelines on what activities are permitted or recommended and what’s not. (Trick or treating falls in the “not recommended” category.) New York City’s Village Halloween Parade , which typically draws about two million spectators annually, got canceled, and the New Hampshire Pumpkin Festival in Laconia, which is a revival of the former longtime Pumpkin Festival in Keene, did too, with a month-long tourism promotion of the state’s Lakes Region happening instead.

Regardless of 2020, Americans still seem to want to recognize Halloween. According to a survey by the National Retail Federation, more than 148 million U.S. adults plan to participate in Halloween-related activities. Safe at-home activities ranked highest: 53 percent plan to decorate their homes, 46 percent plan to carve a pumpkin and 18 percent will dress up their pet. More than three-quarters say the virus is impacting their celebration plans, with overall participation down to 58 percent. Even so, 17 percent say they plan to celebrate virtually. Consumers are doing what they can to still make it a special event by spending a little more on home decorations, candy and greeting cards.

People will also be treating themselves, so to speak. According to Christopher Gindlesperger, the National Confectioners Association’s senior vice president of public affairs and communications, purchases of Halloween candy are up 13 percent from last year. Its growth is driven by chocolate, which is up 25.3 percent—unsurprisingly, perhaps, during these stressful times.

Still, Halloween 2020 is having its moment in other parts of the country, even if it will feel different compared to years past. From virtual ghost tours and haunted houses, to small and socially-distanced gatherings, Halloween happenings aim to still be frightfully fun.

Known as the Halloween Capital of the World, Anoka, Minnesota marks its centenary in 2020 as the first believed city to organize a Halloween celebration. “In years past, we’ve had different events throughout October,” says Anoka Halloween president Liz McFarland. “And this year, we’ve obviously scaled it down.”

In May, McFarland began asking the volunteer organization to think outside of the box in planning their celebratory milestone; in August, they put a Plan B in place for events that could either be held outside or online. Planned activities are being finalized as they are posted on the Anoka Halloween’s website.

Anoka’s Grande Day Parade on October 31 will continue as a longtime Halloween tradition, but for 2020 it will take place as a drive-by procession. Its route is expected to venture along several city locations. At 7:30 p.m. on Halloween night, church bells will ring and sirens will sound as they did a century ago. A Halloween fundraising gala with a silent auction will happen virtually; there will also be an outdoor movie night (Gremlins!) and a bingo night drive-in.

During October, Salem, Massachusetts typically draws in about a half-million visitors due to its legacy with the Salem Witch Trials and the city-run annual “Haunted Happenings,” a monthlong celebration with parades, costume parties and movie nights.

“We were on track for our biggest tourism year ever,” says Kate Fox, executive director of Destination Salem, the city’s tourism board.

Since early July, Massachusetts has been in the third phase of its reopening process, which limits public attendance of events to fewer than 25 people indoors and double that amount. By early August, Salem officials issued an advisory to the city’s business community, telling them that during October they had to either cancel, reschedule or modify events to being online.

Normally, Salem Haunted Happenings would consist of 31 days full of events. The Grand Parade, which kicks off the monthlong festivities, was canceled. So was a kids’ costume party and a pet parade. With a calendar listed on the celebration’s website, online events include a virtual Haunted Happenings Market and a virtual Halloween costume contest. The contest is accepting photo submissions until October 22; voting starts on October 24, with winners announced on Halloween.

Museums, restaurants and shops are operating in a limited capacity; walking tours are reduced in size, capped at 10 attendees, and require advanced tickets. (Many of the tours are already sold out for the month.). Released in August, a Destination Salem app lists a visitor’s guide and sends notifications on parking, traffic and crowd control, such as on the buzzing Essex Street.

However, Fox emphasizes that this year is not the best to take an impromptu trip, hearing about visitors “who get here without a plan.” So does the Salem Board of Health, who has issued a local travel reporting requirement for out-of-state visitors staying overnight at a hotel, inn or short-term rental.

Started in Solvang, California, but now involving other towns in Santa Ynez Valley, this year’s Santa Ynez Scarecrow Fest will encourage the general public to vote for their favorite scarecrows made by and on view at local businesses and organizations online. Attendees can view the scarecrows on display outside, then make their selections via the event’s website or their phones.

“We decided to do away with paper maps and ballots and ballot boxes, which are usually placed throughout the village of Solvang,” says Tracy Beard, executive director for Solvang Chamber of Commerce. The event runs through October 31.

The family-run Solvang Farmer Pumpkin Patch has modified its pumpkin patch and corn maze happening now through November 1 to allow for social distancing. Staff has also implemented contactless payment, hand sanitizing stations and crowd control measures in both the maze and pumpkin patch.

“Our 10-acre corn maze used to have a four-foot-wide pathway in previous years,” explains Tayler Jacobsen, manager of the patch and son of owner Steve Jacobsen. “This year, our pathways are widened to 10 feet for social distancing.”

Also, instead of having dead ends where maze-goers would have to turn around and encounter fellow wanders while heading back, the maze was also designed to loop back around to maintain a continuous flow and reduce the scope of running into other people.

In Smithfield, North Carolina, the Johnston County Heritage Center has been putting on a popular ghost walk for 16 years, with actors portraying local historical figures and leading the tour through the downtown Riverside Cemetery, where they would hear each ghost “perform” their story.

This year, the Heritage Center will post individual videos of each ghost on their YouTube channel, JohnstonNC Heritage, beginning at 7 p.m., Thursday, October 29. The ghost actors will be filmed in places around the county that are historically relevant to their stories.

Todd Johnson, the center’s director, noted that although they can’t conduct this year’s tour in the same way as before, they are excited about having the opportunity to use video with different backdrops and better control of sound and lighting. “Our ghosts normally have to recite the same monologue 20 or more times in the damp night air,” adds Johnson. “So I’m sure their vocal cords and bodies won’t mind that this is a one-time, pre-recorded presentation.”

Broadway performer John Arthur Greene will portray Thomas Bingham, who was first postmaster and founder of the North Carolina town of Garner, in a bit filmed at Bingham’s burial site, Riverside Cemetery. Other ghastly stories will center on Old Man Lynch, whose ghost is said to haunt the site of an old bridge crossing Mill Creek in

The Great Jack O’Lantern Blaze at Van Cortlandt Manor in Croton-on-Hudson, New York, will operate at reduced capacity by 67 percent to ensure social distancing now through November 21. The outdoor, touch-free and nightly event implements a spacing format that has been in place prior to the pandemic, with timed admission and a one-way walkthrough path.

“Many elements of Blaze make it friendly for this type of environment that we are in,” says Rob Schweitzer, vice president of Communications and Commerce for Historic Hudson Valley. “Now this year, we’ve reduced our capacity by more than two-thirds, and this is in keeping with the New York State guidelines for what they determine as low-risk and outdoor arts and entertainment activities.”

More than 7,000 jack o’ lanterns handcarved by the staff at Historic Hudson Valley, a cultural organization, and local artists will illuminate the grounds, where orange driveway markers and Social Distancing Ambassadors will help visitors keep a social distance of 10 feet.

Favorite returning installations include the Statue of Liberty and Jurassic Park, and they will be joined this year by new creations, ranging from a fire truck making a special rescue to witches casting a spell. The event will also host a second location at Long Island’s Old Bethpage Village Restoration through November 1.

For 10 years, the Arc of Loudoun, a disability services and support nonprofit organization, has been staging Shocktober, a haunted house at the 140-year-old Carlheim Manor in Leesburg, Virginia.

Usually, attendees journey through four stories of the 19th century property before reaching its basement lair. Having ranked number 5 on Travel & Leisure’s 2018 list of the 25 most Haunted Houses list, this frightful experience has groups of up to six people encountering zombies and hideous clowns, shifting floors and odorous areas.

As for 2020, the manor will welcome visitors in another, well, manner.

This year, this Halloween fundraiser will run as a virtual program with prerecorded tours of the haunted house and online tutorials on getting stylishly prepped for Halloween.

“We began brainstorming alternatives last spring, and decided that ‘going virtual’ would best enable our community, as well as Shock fans around the world, to experience the thrill of Shocktober,” says chief executive officer Lisa Kimball, “from the safety of their own homes.”*

The Arc of Loudoun has partnered with VIDI SPACE, a web platform for indie filmmakers, to livestream socially-distanced Shocktober walkthroughs with celebrity guests, such as Hairspray film actress Nikki Blonsky. Then via Zoom, Shocktober is offering online classes in basic to advanced makeup, wardrobe, prosthetics and DIY Halloween décor.

“If you buy access to a class, you'll be able to see it again so that you'll have the opportunity to really incorporate what the experts are teaching,” says Kimball.

For safety with filming, Haunt Master Matt Smith, also known as Arc of Loudoun’s director of facilities, and his creative team inserted protective shields throughout the house and modified each character’s acting direction to ensure plenty of space between them and others. (When asked for a sneak peek of what viewers will see of the house beforehand, Kimball replied with a friendly but firm “nope.”)

However, according to Kimball, Matt also sought to “freshen up some of the rooms [in the manor] in ways that wouldn't cost much at all, but would give Shocktober fans something new to see even they're going to be seeing it from their homes.”

*Editor's Note, October 13, 2020: A previous version of this story incorrectly stated that Lisa Kimball is the chief development officer for the Arc of Loudoun, when, in fact she is the chief executive officer. The story has been edited to correct that fact.