Celebrate Jane Austen’s Birthday With a 360-Degree, Interactive Tour of Her House 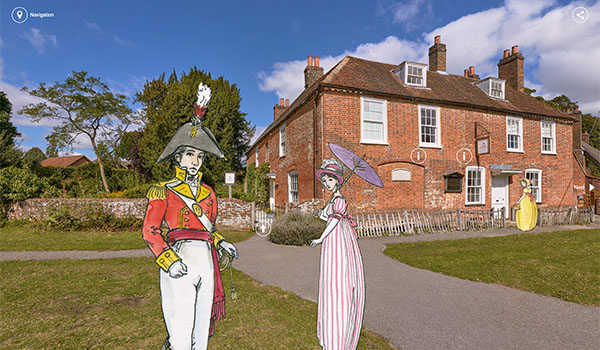 Lizzie Dunford became director of the Jane Austen's House Museum at about the worst possible time: this past spring, shortly after the United Kingdom ordered nonessential workers to stay at home, all nonessential shops and other sites to shutter, Parliament to recess for 30 days and the Church of England to close its many doors.

"I've overseen a strange period" in the house's life, Dunford says, with smiling understatement, via Zoom.

The Jane Austen House is situated in the village of Chawton, about 50 miles southwest of London and has long been a mecca for the novelist's most passionate fans, often referred to as Janeites. When the house closed on March 20, the site's trustees huddled to plot a path forward—and over the last nine months, they’ve found inventive new ways to keep Janeites diverted during quarantine through online events, while rethinking exhibit spaces and launching a vivid, 360-degree virtual tour of the home.

The house is accustomed to hosting huge numbers of visitors—about 38,000 in 2019, and about 41,000 the year before—and has a major online presence, with 27,000-plus subscribers to its Facebook page, where it hosts many of its virtual events. In May, the Austen House launched #StayatHomeandReadJane, a "collective performance project," in Dunford's words, whereby Janeites from across the globe recorded video of dramatic readings of Austen's letters. (The video is pretty charming.) In addition, over the summer Dunford and her colleagues ran a social media project called "Journaling With Jane"; for this activity, participating Janeites would write a daily entry on a given theme from Austen's novels, leading up to the anniversary of Austen's death, on July 18.

The house reopened to the public on August 8, as Covid-19 restrictions began to ease in the United Kingdom, but the experience was quite different from pre-pandemic times. First, the trustees limited the number of visitors per hour to 12. Further, in the old days, Dunford says—that is, before March—the house offered visitors all manner of hands-on activities. Not so today.

"We had a whole range of costumes, including gowns, top hats and bonnets, that visitors could try on. Similarly, visitors could lavender handbags, or practice writing with the sorts of pen and ink that Austen would have used,” says Dunford. “All these activities involved a lot of handling, so we had to remove them."

With the house's more tactile offerings now off-limits, Dunford and her team set about creating a new kind of Austen experience, one less rooted in touch and more rooted in atmosphere—including the clever deployment of hidden audio players throughout the house.

"We use the language of religion when talking about writers’ houses," Dunford observes. "'Pilgrimage. Relics.' Despite precautions, we wanted to make sure it felt like entering a home, entering into 1815, entering the world of the novels." By placing very small mp3 players throughout the site—they’re "hiding behind the skirtings," Dunford says—the house's overseers conjured suitable passages from Austen's novels to play in each room of the house. In the kitchen, for example, you'll hear actress Gina Beck as Mrs. Bates, a character in Emma, praising a certain batch of baked apples, as well as a recipe from the Austens' close family friend Martha Lloyd. In the drawing room, meanwhile, visitors will hear recordings of pianoforte pieces that the Austens would have played in that very room.

"We're using the audio to do storytelling," Dunford says. "We wanted to create an experience that was emotive, relevant, accessible: You can't put on bonnets and play dress-up in the house right now. What we've done is to find these other ways to create deeply powerful connections to Austen's work."

Kathryn Sutherland, a celebrated professor at Oxford and the Austen House's education trustee, says that the house's new exhibits offer readers new avenues to explore what is often a deeply personal relationship with Austen and her novels.

"[Austen is] an extraordinary writer in that she encourages this sense of intimacy with the reader," Sutherland says via Zoom. "Every reader comes away convinced that they have a special relationship, usually with the heroine. So intimacy is something that people come from all over the world to find in Austen’s house, to enrich and replicate the experience they’ve already had with their special author. Adapting to the pandemic, we aimed to nourish that interest in richer ways, through a much broader online platform."

In September, Dunford’s team instituted "Austen Wednesdays," a weekly chat with an author or expert on some aspect of Austen's work or age that regularly sees upwards of 1,000 views on YouTube, as well as a running series in which actors read famous passages from the novels.

And on October 22, perhaps the most exciting online resource launched: the 360-degree virtual tour of the Jane Austen House, which anyone can explore with or without a guide. If you elect for the unguided version, you’ll hear excerpts from Austen’s letters and the distant clop-clop of horses pulling a carriage; once you’ve navigated yourself inside the kitchen or drawing room, you can then toggle around in every direction, noting all the little details—the sheet music on the pianoforte, the newspapers strewn across a writing desk. (Guided virtual tours can include up to 50 visitors; they frequently sell out.) The house is holding a virtual party for Austen's 245th birthday on December 16, where guests of honor will include Paula Byrne, author of The Real Jane Austen: A Life in Small Things; clothing historian Hilary Davidson; and food historian Julienne Gehrer, with period music provided by the singer and vocal coach Georgina White.

Dunford's team scored a coup when they landed Dame Emma Thompson, noted Janeite, as keynote reader for "The Twelve Days of Christmas: A Jane Austen Special," during which participating Janeites will hear new recordings of Thompson reciting Christmas-appropriate excerpts from the novels. There will also be music, games and puzzles, as Janeites gather virtually to celebrate the novelist in a cozy Christmas atmosphere. (With the exception of the guided 360-degree tours and the Austen birthday party, all of these events are free.)

Though the house closed again on November 5 amid the U.K.'s second lockdown, these online resources continue to offer Janeites around the world plentiful access to objects and activities from Austen's life, and—equally important—access to each other, in a collective fandom that has thrived virtually long before Covid.

"Ah! there is nothing like staying at home for real comfort," declares Mrs. Elton in Austen's 1815 novel Emma. Covid-19 is testing that proposition, and Janeites are fortunate that they can now "visit" the Austen house without sacrificing the comforts (and safety) of home.