What Makes the Buffalo River the Jewel of the Ozarks 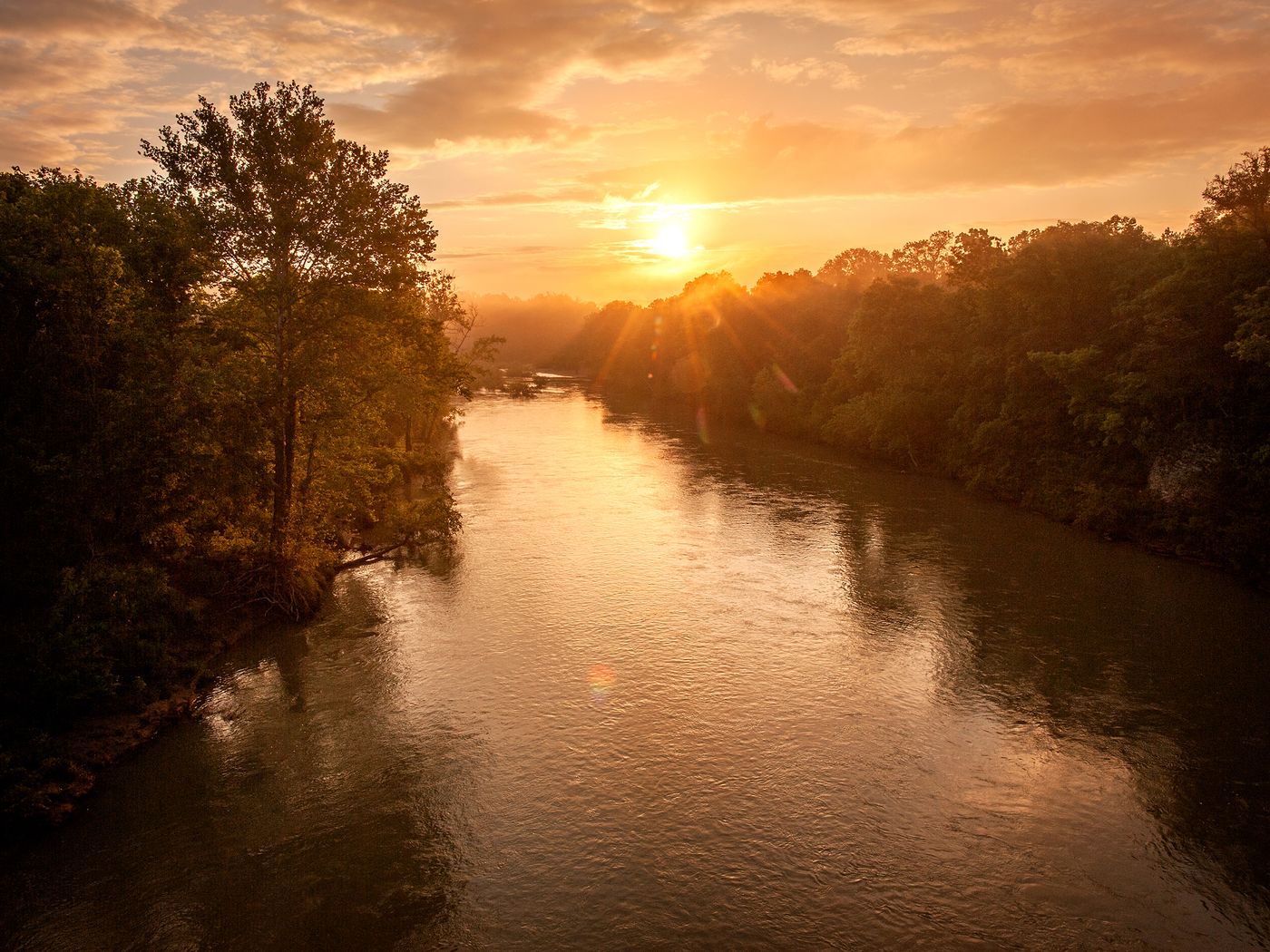 Sunrise near St. Joe, a mining town that fell into decay about a century ago. Today, it’s a destination for people exploring the Buffalo River.

If smoothed out flat, the rough mountainous terrain of Newton County, Arkansas, would prove “bigger’n the whole state of Texas,” a local resident once proclaimed to a folklorist. That may be an exaggeration, but the wrinkles of the topography have certainly kept this corner of the Ozarks quiet. Fewer than 8,000 people live scattered across Newton County’s 820 square miles. The place is mostly known for a waterway. Near the county’s western border, a trickling stream grows into the Buffalo River—the first national river in the United States, a distinction it earned 50 years ago.

For a long time Arkansans couldn’t agree on what the river should be used for, and some even fought over it. In the 1940s, with the local timber felled and the zinc and lead operations floundering, state tourism officials started promoting Newton County as a wilderness destination. The county was home to nearly half of the Buffalo River watershed, and outdoors enthusiasts considered the mountain stream one of the finest in the region, if not the country; it was a rare, free-flowing waterway, perfect for rafting or canoeing. Some local leaders wanted to turn the watershed into a national park. Others wanted to dam the river, which could provide hydroelectric power and form the kind of placid lake that had spurred the development of lodges, restaurants and retirement homes elsewhere in the Ozarks.

For their part, many people who lived alongside the river opposed both the dam and the national park. They didn’t want their farms drowned, and they weren’t eager to give up their property for what one of them derisively called a “130-mile-long zoo.” In 1965, when supporters of a national park idea organized a canoe race, they arrived to find that someone had blocked the Buffalo with downed trees and barbed wire.

In a 1966 speech, Gov. Orval Faubus (a Democrat who had become infamous for his opposition to school desegregation) voiced his strong support for the formation of a national park. He fondly looked back on his own encounters with the river as a younger man: “Like a suitor courting a lovely maiden who becomes more enamored with her charms each visit, so was I with the Buffalo River Valley.” Faubus’ campaign to protect the Buffalo was joined by other prominent Arkansas politicians, including John Paul Hammerschmidt, a Republican who began serving in the U.S. Congress in 1967. Hammerschmidt sponsored a bill to make the Buffalo a national river.

At the time, politicians of both political parties were taking steps to protect the environment. President Richard Nixon inaugurated the Environmental Protection Agency in December 1970. The Clean Air Act passed a few weeks later with unanimous support in the Senate and only one opposing vote in the House of Representatives.

The Buffalo River bill also passed easily, and on March 1, 1972, Nixon signed it into law. The Buffalo and 135 miles of its banks were now part of a portfolio of landscapes that were considered America’s natural crown jewels, including Yosemite, Yellowstone and the Grand Canyon. (The river’s westernmost 18 miles were under separate protection as part of the Ozark National Forest.) In 1978, the New River Gorge in West Virginia was also designated a national river, but the area was recently converted to a national park and preserve. Other rivers today have National Park Service protection under different names, such as national river and recreation area, and national scenic waterway. The national wild and scenic rivers system, inaugurated in the late 1960s, includes other bodies of water but does not guarantee NPS involvement. When it comes to the simple title of “national river,” the Buffalo stands alone.

I first visited the Buffalo a decade ago, on an April trip with friends. It was float season, that time in spring and early summer when the upper river is deep enough for canoes. The water, cold and clear, tumbled over gravel bars and curled past craggy cliffs. It had carved a passageway through an otherwise forbidding landscape of shale and sandstone and limestone. It was a perfectly contained little wildland.

Or so it seemed. Shortly afterward, in 2012, Arkansas granted a permit for a new hog farm, which soon opened along one of the Buffalo River’s tributaries. The hog waste was stored in large lagoons. If the clay liners gave way or the lagoons weren’t properly pumped down, manure could seep into the tributaries. Even if the lagoons held, the manure would eventually be converted to fertilizer and sprayed on nearby fields, which some local residents worried would overload the river with phosphorus. Gordon Watkins, an organic blueberry farmer in Newton County, co-founded the Buffalo River Watershed Alliance, one of a handful of nonprofits that worked together to fight the farm. “The river is nothing but the sum of its tributaries,” Watkins says. “Whatever happens in those tributaries is going to impact the Buffalo.” The state received a record volume of complaints about the permit, and while there were never any confirmed leaks, inspections indicated that lagoon liners had cracked and eroded, leaving the state’s water supply vulnerable.

In 2019, Arkansas Gov. Asa Hutchinson, a Republican, moved to shut down the hog farm, directing $6.2 million in state funds to compensate the farmers. (The Nature Conservancy also made significant contributions.) Like Faubus, Hutchinson was a self-declared outdoorsman who had enjoyed his own jaunts on the Buffalo River. “I was in law school when I discovered the Buffalo River,” he said in a speech, “and like so many Arkansans, I value the Buffalo as a particularly beautiful part of God’s creation.” Hutchinson formed the Buffalo River Conservation Committee, which brings together state agencies and others to monitor and improve the 855,000-acre watershed linked to the river.

Threats remain, of course. Heavy rains carry dirt off unpaved roads and into the river. The U.S. Forest Service has plans to thin and burn portions of the forests near the river’s headwaters, which some worry could affect water quality in the river. Summer algae blooms on the river have been more prolific in recent years; the cause likely involves excess nutrient input from agricultural fertilizer and soil washing into the river. “All these things that are going on outside the river have direct impact inside the river,” says Mark Foust, superintendent of the Buffalo National River.

After Foust assumed his post, in 2018, he set out to explore every stretch of the river within the park. He finished his quest last year, hiking into a canyon and launching in an inflatable raft—the only way to access the stretch nearest the source. Foust says he expected to find, at some point, a stretch of water that was less than scenic. He never did. Nor have I, in many return visits.

On my latest trip, I hiked to one of the sites touted by state officials in the 1940s, Lost Valley, where a trail follows a creek up a rock-strewn canyon to its source. After a strenuous climb, past a series of waterfalls, we arrived at a tidy cascade pouring from the mouth of a cave. The end of the trail—or so we thought.

Then two hikers wearing headlamps emerged from the cave’s dark maw. They urged us to go in. So we crawled on our hands and knees through a narrow crevice, lighting our way with cellphones, and reached a 25-foot waterfall, hidden within a pitch-black chamber. Thus we found ourselves inside the mountains themselves, washed in the crash of the cold, dark water where it all began.

Photographer Rory Doyle is committed to sharing stories of the Delta, from his base in Cleveland, Mississippi.

New Orleans-based writer Boyce Upholt is currently working on a travelogue about the Mississippi River.